Royal Roads University has received $15 million in provincial funding for its first new academic building since making the transition from a military college in 1995.

The funding was announced yesterday by Advanced Education Minister Murray Coell at the Colwood campus. The overall cost of the new building will be $23.6 million, with the rest of the money coming from Royal Roads through fundraising and other financing.

Royal Roads president Allan Cahoon said the new structure will fill an urgent need for more space at the university.

"We've averaged a 10 per cent increase in new students in each of the last two years and are projecting to grow another 11 per cent this year, so this new facility will allow us to serve more learners and serve them better," he said in a statement.

Coell said the new building, set for a fall construction start, will include space for classrooms, seminar rooms, computer labs and offices. He said it will have a "laddered" style that fits into the landscape.

The added capacity the building brings to the university will allow for growth in student numbers over the next few years, he said.

"It gives Royal Roads the ability to add about 1,000 new graduate and undergraduate spaces."

Construction should take about 18 months, Coell said. He said the building will be tucked into the sloping ground above the Grant Building - currently the centre of academic activity - and Hatley Castle at the site of existing parking lots, and will be planned with the highest environmental-design standards. University Drive, the central campus road leading from Sooke Road, will be rerouted to make way for the building.

Community Services Minister Ida Chong said work on the university's Robert Bateman Art and Environmental Education Centre is likely to start next fall, as well, and it will also have exacting environmental features.

"There's going to be lots of construction happening at Royal Roads at that time."

Royal Roads spokeswoman Stephanie Slater said the site of the academic building fits in with the way the campus has developed over the years. She described the changes that have gone at at Royal Roads - and that will continue with the new building - as part of an "evolved landscape" that develops from what is already in place.

VICTORIA – The Province is providing $15 million to Royal Roads University to fund the first new academic building to be constructed since RRU’s transition from a military college to a university, announced Advanced Education Minister Murray Coell.

“RRU has expanded at a rapid pace in order to provide students with career-oriented applied degrees,” said Coell. “The new building is part of our promise to expand programs related to business and the economy.”

Currently, the university offers classes to 3,000 students even though the original buildings were built for only 300 cadets. RRU is able to accommodate the larger student body by combining distance education with short, intensive on-campus residencies. This enables students to participate in degree programs while continuing to advance in the workplace. The building can accommodate over 1,000 RRU students annually.

“While RRU has an extremely efficient model for using the existing buildings on our campus, the reality is we urgently need new space,” said Royal Roads University president Allan Cahoon. “We’ve averaged a 10 per cent increase in new students in each of the last two years and are projecting to grow another 11 per cent this year, so this new facility will allow us to serve more learners and serve them better.”

The proposed new academic building will add a total of 4,571 gross square metres, and will include space for classrooms, seminar rooms, computer labs and academic offices.

“We are impressed with RRU’s plans for ensuring the new building will create zero greenhouse gas emissions,” said Coell. “Government is committed to supporting sustainable and environmentally friendly building designs at our post-secondary institutions.”

The university intends to attain a Gold Certification in the Leadership in Energy and Environmental Design (LEED) standard for this and all future campus projects.
<snip>

I haven't seen it mentioned on here yet, but Royal Roads is planning a new 3 to 4 story building on campus, I believe at about 17 000 sq ft. Construction should be starting in the somewhat near future, Durwest will be the Project Management with Campbell having been awarded the formwork contract last week.

I believe it went up when the last older crane was taken down at the Jubilee as a matter of fact.

Does anyone know why the Province gave RRU $21M dollars, about twice what we gave them last year?

Someone has spray painted swastikas on a grove of trees at the university grounds, in the forested area west of the campus. Not good.

is it an area known for naziism?

More nihilism than naziism I think.

Hateful graffiti, including anti-Semitic content and a Black racial slur, recently discovered in the forest surrounding the campus in Colwood has been confirmed by Royal Roads University.


a lot of people might read that article and still not know what ls going on. it takes a bit of a wordsmith to describe the issue without naming it. 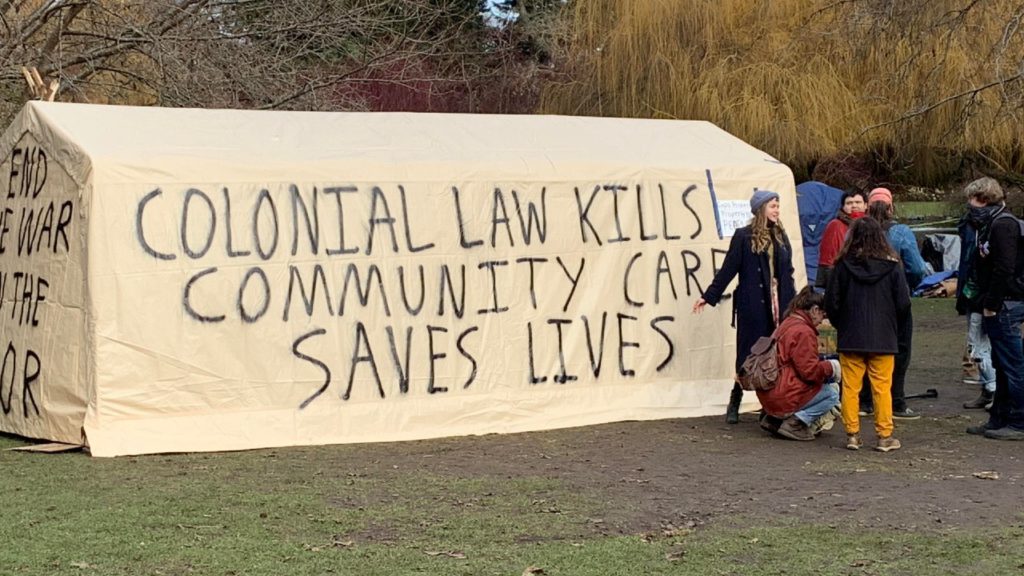 Who knows - perhaps there was a convention of Buddhist's in the area nearby?

Well this still is a British occupation until we get rid of the monarchy.