[Bicycles] Issues with bicycles and cyclists in Victoria

Impressive. Been biking for 6 years. Did not know.

It should be mandatory for a municipality with a bylaw permitting cyclists to cross at trail crossings to post signage for the drivers alerting them to said bylaw.

Saanich should have "elephant feet" painted in addition to the "zebra crossing." They've got them at McKenzie and Borden now with the cycling upgrades, so hopefully it will be applied to the other trail systems. That said, many people (including cyclists!) don't realize what elephant feet signify.

Saanich should have "elephant feet" painted in addition to the "zebra crossing." They've got them at McKenzie and Borden now with the cycling upgrades, so hopefully it will be applied to the other trail systems. That said, many people (including cyclists!) don't realize what elephant feet signify.

Sadly, actually absolutely nothing. City of Vancouver recently amended their Streets and Traffic Bylaw to codify what elephant's feet mean, but they have no legal force and effect from the MVA (something a lot of groups are trying to change)

I have no idea what they mean.

I googled, "dashed lines beside crosswalk" when I first saw those on the pavement.  Once I had the term "elephant feet" the rest was easy.  I think I first saw these where the Goose crosses Burnside at Watkiss.

But yeah, the MVA doesn't mention exceptions by municipal bylaw (such as elephant feet or Saanich's 8.16 (b)).

heres an interesting one

Boy, 15, is given six points on a driving licence he doesn't yet have after being caught at 'high speeds' on an electric SCOOTER


Years from now, when I'm asked if there's a particular moment that somehow captures Victoria during the Helps era... well, this one is a possible contender. It could only be more perfect if the doodoo contained a syringe and the driver tried to protect herself with a plastic bag, after which the mayor gave the cyclist an award and announced new funding for portapotties in all the separated bike lanes.

Saw in the Saanich News that U-Bike has had 10% stock loss so far (it's not clear if that 550 bikes, or 10% of 550 bikes).  I feel like they're lucky it's that low, but probably reflects the fact that the supply of bikes for the chop-shops is likely flooded, so they can only steal and process so many of the U-Bikes right now.

It should be mandatory for a municipality with a bylaw permitting cyclists to cross at trail crossings to post signage for the drivers alerting them to said bylaw.

So far we don't have an active railway like this one...

[this should lead to a calm and enlightening discussion]

Can we get a study on all modes of transportation? I want to know how rollarbladers compare with those electric scooters that shouldn't be allowed on sidewalks but are.

Yesterday I witnessed 2 cyclists at Pandora/Blanshard ride diagonally across traffic to ride their bikes on the south  sidewalk rather than the north side bike lanes.

Pretty sure that Forbes study wasn't conducted on the streets of Biketoria.

I spent a good five minutes watching this clown wrestle with this front wheel that (legal disclaimer) coincidentally looks identical to a U-bike wheel.

He managed to hammer it into the forks but realized the wheel's diameter was smaller than normal so the front brake wasn't aligned. His solution was to attack and remove the brakes with a pair of pliers.

Of course the roaming security guards (who are probably trained by the same outfit that trains pro wrestling referees) turned a blind eye to this tragicomedy. 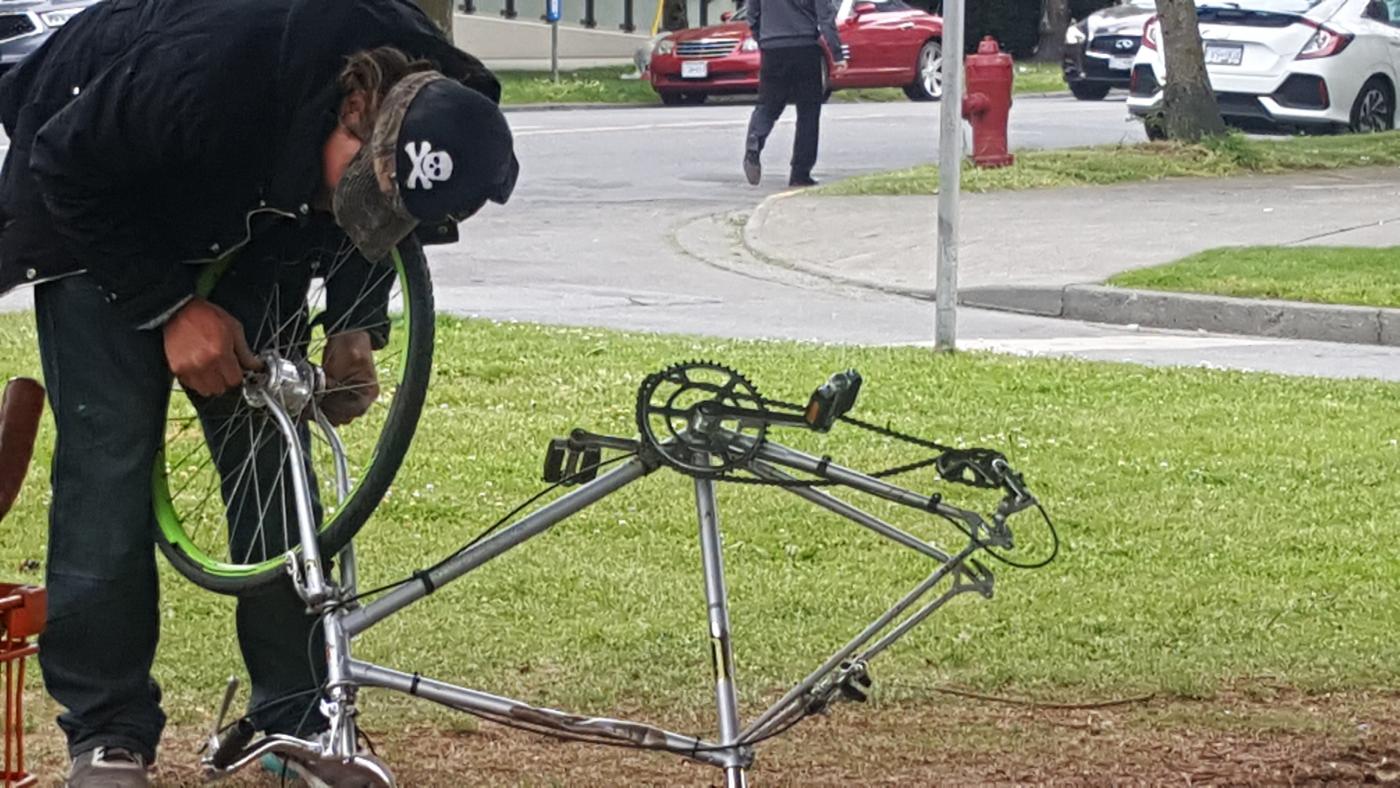 for someone who is homeless (yes, its an assumption), he looks surprisingly clean, well fed, etc.  Remind me again why he should want to get off the system or get a job?

That's a weird statment. Because someone you assume is homeless doesn't look homeless...

Not sure this is the right place but just in case...

Ok, so are employees of Victoria Pedicab Company allowed to offer their services without wearing helmets?