The Murals of Victoria

They just did a new one on the other side...

The Wildfire Bakery on Quadra is one of the few places on earth that if someone showed up and painted it all with one colour of paint they could probably be charged with vandalism.

There used to be a giant graffiti mural on the north side of Johnson St. in an alley. It was very detailed and must have taken a long time to create. Right afterward, someone with a paint roller walked along and put a fifty foot beige stripe down the centre of it. The wall was later painted over but I think you can still see a remnant of it.

The mural's creators were mighty choked about that.

Path next to the convenience store near the corner of Montreal Street and Superior Street, James Bay.

^ nice photos! Isn't Irving Park the one that was in the paper recently, because it's used as a shooting gallery (drugs, not guns) and neighbours who complain are told by the police that it's not true (even though the neighbours find needles all the time)?

You know we have pretty good collection of murals on here now and there are tons that we have yet to document!

This is located along the Galloping Goose trail behind the Willow wind feed and pet food store.

That alley on Johnson Street (just before Broad) had an ever changing series of very good graffiti murals on it. At one point there was a tribute to Vaughn Bode, another time, when Dorthy's Cafe (sp?) was open there was a wizard of oz theme'd mural. The only one I hated was when they were going through their "pink" phase. What a shame that now we have the "graffiti gone in 24 hours" approach to random urban art these murals no longer happen.

^I'll be right over to spraybomb your home and business. I'm sure you won't mind.

I find graffitti disgusting. Not as an art form but as a transgression on personal and public property.

I love the places that allow it like Wildfire but anyone that does it on a building without permission should be charged. Taggers should be charged doubly so because of the lessor artistic merit of what they do.

Also I thought that it was considered wrong to tag other pieces of art but mural but that one on the goose shows that I am wrong to even give them that kind of decency.

Three worst transgressors I have noticed recently are the Royal Bank Building, Old Cross' Meats building and one on Fort Street I think the building with the CAF office in it.

If there was only someway to electrify walls so that the charge only transfers through spray paint particles and black permanent markers.

That is my rant of the day.

wow I wonder what planet that James Bay mural is supposed to represent?

That is an actual representation of how people in James Bay perceive the world.

Well, /cough... actually the wall I am talking about is my business. I manage that building. And in the days that the graffiti murals were being done I was a tenant there.

The difference between those murals and normal graffiti was the amount of pre-planning and care they took. The style may have been urban but the work was a unified piece of art. I'm not such a big fan of graffiti as a blanket thing but these pieces were almost always exceptional, and I hope I can appreciate anything that is high quality, regardless of genre.

Aboriginal Relations Minister Mike de Jong won't discuss the fate of the murals other than to say talks are in a preliminary stage.

But he has been quietly seeking input from native leaders about the fate of George H. Southwell's colourful paintings, which supposedly depict scenes from about 1792 to 1850.

The other three murals feature a native man being punished before a colonial court and a pair of landscapes celebrating Europeans colonizing the new world as natives look on impassively from the background.

Native leaders have long had a scathing critique of the artwork. They consider Southwell's paintings insensitive and racist.

By removing the murals, Premier Gordon Campbell could score major goodwill points among the native population -- something the government would be keen to do. One of the main themes in today's throne speech is expected to be the province's push for a "new relationship" with aboriginals that hinges on finalizing a series of multibillion-dollar land claims settlements.

But it will also surely re-ignite a debate over whether art is being trumped by political correctness.

The last time the issue raised hackles was in 2001, when an advisory panel to the Speaker's office hired art experts to appraise the work. The experts concluded that the removal of the murals would be "a major loss to the art history of the province."

Yet the advisory panel overruled the art experts, and urged that the murals be removed and preserved. That recommendation has so far been ignored.

My main problem with the murals is that people consider them "high art" when they are rather poorly executed. I say take them down and commision some real art.

News flash: This is not an historically accurate illustration of 18th Century Turkey. So let's burn down the Louvre: 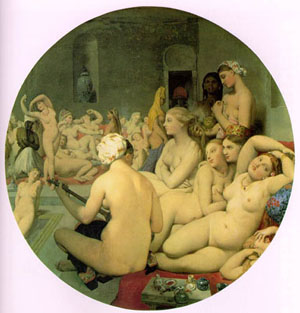 You're right. That tea set is all wrong.

wow I wonder what planet that James Bay mural is supposed to represent?

I find it interesting that such a crazy complicated mural contains no reference whatsoever to the city. No buildings at all (except for the obligatory legislative dome reference).

Its not the depiction I have a real problem with it is the fact that I think they look like something you see in a community centre in Bamfield.

This is an excellent opportunity to put up something of real quality. These can be removed and put in the National Gallery (yeah right!)

Use the page links at the lower-left to go to the next page to read additional posts.
Back to Victoria Photos