When you send Canadian warships to Somalia, Libya or perhaps again to Korea, you don't need all the Admirals to go along. So it doesn't matter which coast the desks are on, as long as the ships and crews are staying in Victoria.

Anyway it's not a done deal as the plan is yet to be finalized, probably in late May.

. So it doesn't matter which coast the desks are on, as long as the ships and crews are staying in Victoria.

I disagree, I wonder what the impact would be to the amount of ship repair work done on the west coast if the financial decisions are made by people living on the East? That could have a big impact on our local economy, I believe CFB esquimalt has 2000 civilian employees along with their navy personel!

Likely this scenario makes some sense and some cost efficiencies achieved - since the creation of CanCom (Canada Command) effecively once any Esquimalt-based warship leaves the harbour it has/is effectively been under Ottawa's command.

If I am reading this right the employees went to binding arbitration then the Federal Govt didn't like the decision and rolled the wage back?

ESQUIMALT, B.C. – Two Canadian warships are returning to port in Esquimalt, B.C. after colliding during manoeuvres while en route to Hawaii.
No one was hurt, but a Defence Department statement says HMCS Algonquin sustained significant damage to her port side hangar while HMCS Protecteur sustained damage of a lesser degree to her bow.

The statement says the ships were conducting towing exercises, which require close-quarters manoeuvring, when the collision occurred late Friday morning.

HMCS Protecteur was celebrating her anniversary on Friday. She was commissioned on August 30, 1969.

The good news is that there are local shipyard workers with recent experience in replacing bows.

Near Hawaii? If they are due back in Esquimalt today, this must have happened a few days ago. These ships ain't that fast. Approximate distance as the crow flies in miles from Victoria, Bc Canada to Maui United States is 2636 miles or 4241.32 Kilometers. < ie. at least 120 hours away. They left on the 26th.

Trainees on the ships were in the midst of towing exercises, which require close-quarters manoeuvring, when the collision occurred at around 11 a.m. PT Friday morning.

No one was hurt, but the HMCS Algonquin sustained significant damage to her port side hangar while HMCS Protecteur sustained damage of a lesser degree to her bow.

"In my time in the Navy, which goes back 25 years, I have not seen two Canadian ships collide during a tow-approach exercise," he said.

"This is a manoeuvre that's done in order to give the ship drivers practice. So that… if required, they could take a vessel under tow and they would be well practiced in how to do that," Pendergast said. "Something went wrong in this case."

I wonder of the recent visit to Victoria by Red Green had any influence in the Navy's decision to repair the ship?

A low flying helicopter will map the shoreline of Esquimalt Harbour tonight (Dec. 3), according to a CFB Esquimalt press release.

I don't even know what "this thing" is.   Is this a military operation (do we have Bell helicopters in our navy?) or some type of survey that requires a low tide?  No low tide at daylight hours works?  Flying a helicopter at night just sounds dangerous.  It's probably not, but still, seems odd.  Is this like the lowest tide of the year or something?

5 to 6 hundred metres is not exactly low flying, it is certainly within normal parameters.

This would be a private helicopter either purpose built for this use or a charter fitted out for it.

Wonder if they do that in Chinese military ports???

Low tide is at 9:28 pm PST at .36 feet, so they are not doing the mapping at the lowest tide according to tides at Victoria.

Probably a LIDAR survey. I bet the late hours are to minimize people being around as the laser isn't something you'd like to look at. Actually I'm kind of surprised they are allowed to do this at all so maybe I'm wrong about the technology.

I hope their instruments are calibrated for night flying, as there is a bit of a difference in thinking you are up at 1968 feet, when in fact you're stuck in the mud at low tide.

Talk about a rare sight. I went out to Metchosin earlier today and while sitting in my car near the ocean out of the mist appeared a Canadian Navy submarine. At least I hope it was a Canadian sub and not a Swedish vessel ready to enact some vengeance against Canada.

What was particularly strange is it appeared near that shipping vessel in the first photo, almost as though its ascent was intended to give the crew a bit of a fright. Either that or the sub had broken down and they sought assistance from the shipping vessel. Either way this was a bit of a surprise. 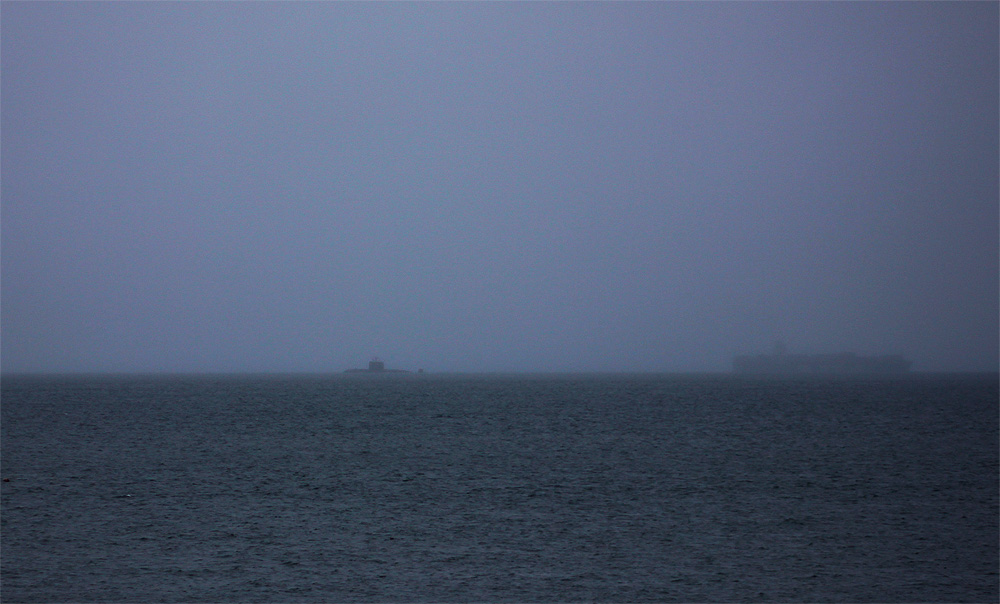 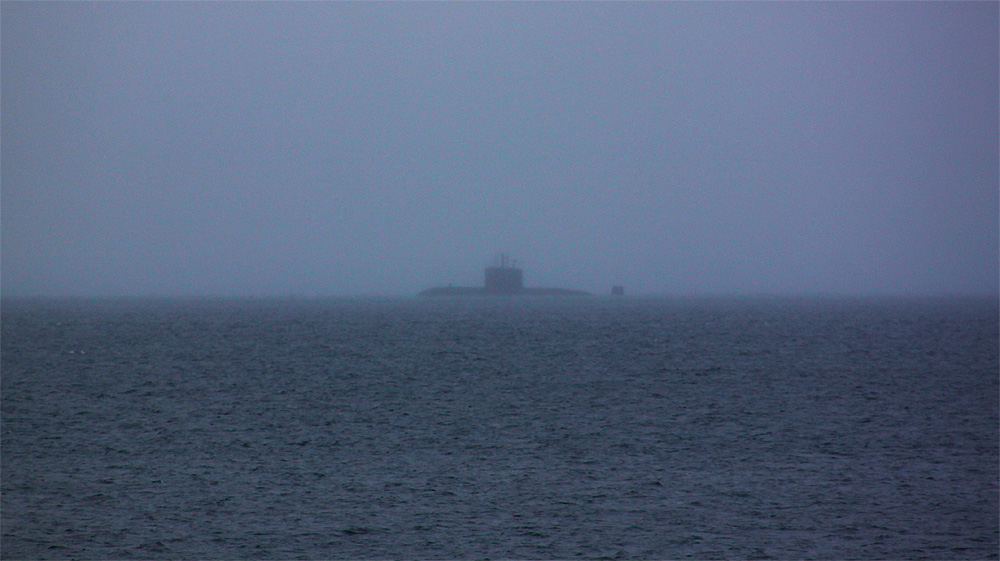 A fire in the engine room of the warship HMCS Protecteur has left the vessel stranded in the mid-Pacific in heavy seas, according to Commodore Bob Auchterlonie, the commander of the navy's Pacific fleet.

The fire broke out Thursday around 10:20 p.m. PT as the Protecteur was returning from operational duties with nearly 300 on board.

He said the fire significantly damaged the machinery that controls the vessel's propulsion, forcing the ship to stop in the water about 630 kilometres northeast of Pearl Harbor, Hawaii.

"At this point, it's looking like she will be towed back to Hawaii, into Pearl Harbor," Auchterlonie said. 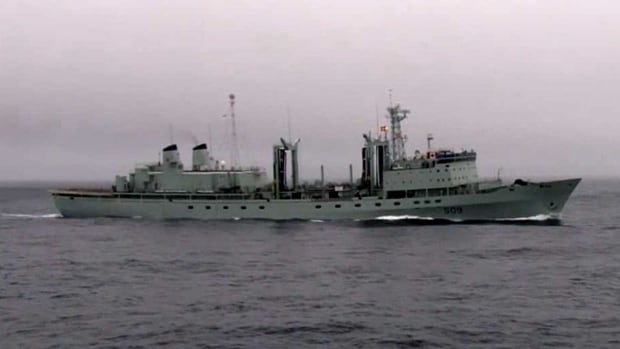 HMCS Protecteur, seen here in a Canadian Armed Forces video image, is stranded in the mid-Pacific in high seas

waiting to be towed to Pearl Harbor. (Canadian Armed Forces)

^ The tow line snapped when trying to tow her back to Pearl in heavy seas.

First they crash it into another one of our boats, now they set it on fire.

What are they trying to do to that poor ship?

Use the page links at the lower-left to go to the next page to read additional posts.
Back to Victoria and South Island Economy