Transit is free if you carry a bike helmet on board, or use the bicycle rack at the front of each bus, throughout Go By Bike Week starting today and extending through October 3rd.

Bus drivers and other employees working for BC Transit will require full vaccination by November 29th, according to a statement issued by the organization to its workforce this morning.

The mandatory vaccination mandate extends to BC Transit’s Operating Companies and its contractors.

The move comes as provincial and national employers extend similar calls for vaccination status for their employees, with fall deadlines for full vaccination.

On any given Thursday, even in mid-pandemic times, five flights leave from Victoria International Airport before 8am. The airport recommends arriving no later than an hour and a half before a plane takes off for a domestic flight, so anyone taking one of those flights should arrive at the airport before 6:30.

The trouble is, without a car or $75 for a taxi, there is currently no way to arrive that early.

The very first bus to arrive at the airport every morning pulls in 22 minutes after the first plane leaves, and too late to have a hope of catching the next two. Google Maps, for its part, suggests catching a bus from downtown at 11:51pm on Wednesday for a morning flight.

how do we manage to have terrible transit service to the ferries, to the airport, and to the naval base?  can this be run any worse?

look at these transit times from west shore: 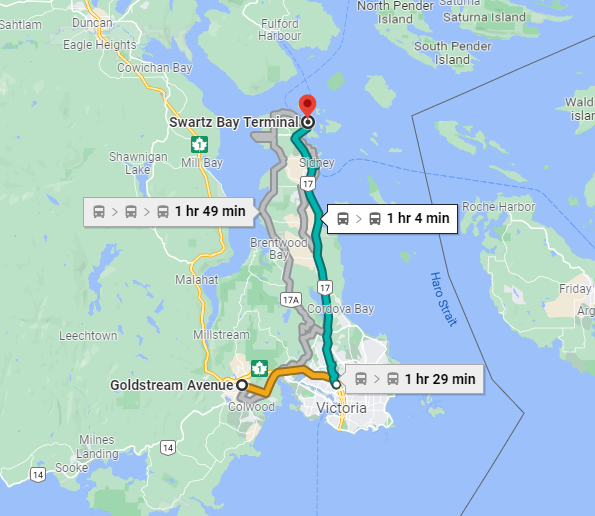 It’s not BC Transit’s role to connect every private transportation option.

Just book a later flight if you need transit to the terminal.

Are ferries bad? I thought the problem was more related to only taking cash than service. The 70 and 72 seem fairly well timed to the ferry schedule (during the summer the 70 will even wait if the ferry is late).

I've long agreed airport needs better service. I get the roads leading to it might not be able to handle double deckers but I don't see why there's no 73 Airport/Downtown or something. They recently did the survey for the peninsula and based on the map the airport having more (and direct to downtown service) was fairly request so maybe we'll get it soon.

2000 ? unincorporated and beyond sooke

we should have a direct bus from downtown and another from west shore to every odd-hour sailing.  surely that's not hard to do.

another bus should go swartz bay, sidney and airport all day long.  back and forth between the airport and the ferry with a stop in sidney in between each, each way. 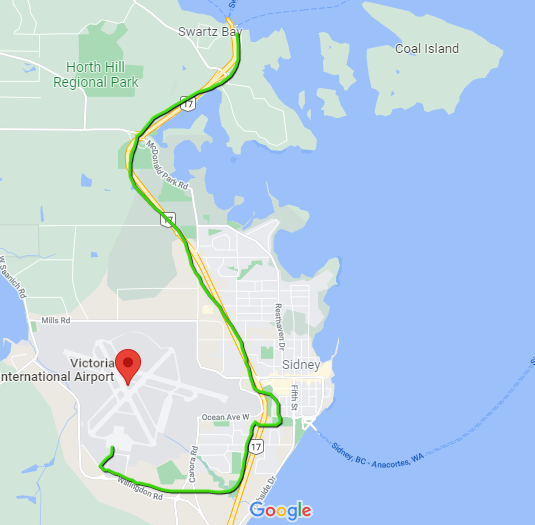 You can catch a taxi from McTavish to the airport, too.

But where’s everybody flying in a climate emergency?

I think BC Transit should do a big overhaul of the system honestly. Why are 11s running empty through Uplands because Gorge needs 10 minute service when we have the 9 that could cover that instead. Why did they interline the 21 and 7 when the 21 seems to need much more frequent service (why was the 7's service so high even when interlined with 2, every time I've taken it it basically empties out by Oak Bay avenue and there's like 5 people on it until downtown when 21 riders start getting on). Why is McKenzie so poorly served between Saanich and the TCH? Why does the 26 serve Saanich anyway, it barely stops and isn't that far from Quadra (Douglas that runs beside the Pat Bay by Mckenzie is further from any other service and all it gets is the 17 which only runs twice a day and is intended for Cedar Hill school). Why is the 15 only half express, why are they proposing a third direct route from Dockyard to Uvic, why is the 76 the only direct connection between the Peninsula and UVic but Westshore gets 39 and 51. So many things that could be fixed but just aren't because I guess can't cut service to Fairfield to add new service or the two people that 7 would have taken will have to leave slightly earlier.

^ Because there's a parking lot at BC Transit headquarters, that's why.  If the decision-makers at BCT had to actually *use* their own system to get to work, then they'd see these problems...

This is why we pay you the big bucks.

You can catch a taxi from McTavish to the airport, too.

But where’s everybody flying in a climate emergency?


We fly to Nfld. in the morning, departing from Vancouver of course. It’s cold there, no climate emergency.

Something interesting, buses now play a message (I'm guessing driver has to do it) saying "this bus will wait a few moments in order to keep the schedule" when waiting at a timing point. Weirdly that doesn't even start scrolling on the screen until the voice is completely done. I guess when they started doing the "face covers are mandatory on BC Transit vehicles" and "Please exit by the rear door, unless you require assistance" they realized they could do ones that are useful at all times like this one and the "Please move towards the back of the bus" (although people still don't seem to believe in standing past the back door).

Looks like no early outline of the winter service change. I'm hoping they change the 26 Uptown only trips back to 16. The few amount of stops (and not having to travel Saanich road for the like 3 people that get on/off) is nice. I assume the only reason was they could cancel the "unscheduled" 26 half trips easier than a full route if UVic went back to online only but unless covid suddenly gets much worse again to the point I doubt anyone will care about them cancelling 16 I really doubt that will happen.

I wonder if they'll bring back the UVic/Swartz Bay run that they ran on Friday and Sunday evenings about 2 years ago?

that would also be good, at the very least a shuttle before long weekends. The 39 was a mess the Friday before Thanksgiving, while I was waiting for the 26 one bus left full and there was about 2 buses worth of people left behind. I'm not sure if I would risk transferring to 70/72 at Royal Oak though, I'd personally probably use the 4.


VICTORIA - West Shore RCMP recently presented Transit Supervisor (TS) Jeff Birtwistle with an Officer in Charge Certificate of Appreciation to thank him for his actions in finding a missing child on what was his first day as a TS.

At 7 p.m. on May 1, 2021, West Shore RCMP received a call from a View Royal family saying their 10-year old daughter had uncharacteristically left their home without her phone or tablet. The girl has health challenges, and her parents were extremely concerned about her whereabouts.

West Shore RCMP officers attended the area and conducted extensive foot and vehicle patrols searching for the young girl. They also notified local taxi companies, BC Ferries and BC Transit, providing a description and a request to notify police if anyone saw her.

“The success of any investigation often relies on the cooperation between partnering organizations and local agencies,” said West Shore RCMP Superintendent Todd Preston. “It is the positive working relationships within our community that contributes to the safety and security of our residents. The actions of Jeffrey Birtwistle and BC Transit are prime examples of how a successful collaboration yields a positive outcome.”

Requests of this nature are common for BC Transit to receive, and there have been many instances where people in the organization have played a key role in locating missing persons. Once the information is received by BC Transit’s T-Comm team, the key details are communicated out to all employees on the road.

Jeff Birtwistle has been a Transit Operator since 2017, but this incident coincided with his first solo shift as an acting Transit Supervisor. He heard over the radio that a Transit Operator had a visual on someone matching the description of the child on the Old Island Highway in Colwood, and he headed to the area to see if he could help. A short time later, he caught up with the girl across from West Shore Recreation Centre.

Just 45 minutes after the initial call came in to West Shore RCMP, they were notified by BC Transit that TS Birtwistle had located the girl and would stay with her until police could arrive on the scene. It wasn’t long before she was returned to her worried family.

On November 1, an Officer in Charge Certificate of Appreciation was presented to Jeff Birtwistle by West Shore RCMP Superintendent Todd Preston at the Langford Transit Centre. The certificate commended Jeff for taking it upon himself to attend the area and complete further patrols to locate her. It states:

Mr. Birtwistle’s willingness to assist in the search and to take the time to follow up on a reported sighting by one of his BC Transit Drivers helped to locate this young girl. Mr. Birtwistle’s efforts are in keeping with the highest traditions of the Royal Canadian Mounted Police and helped to bring this situation to a quick resolution and ensure this young girl’s safety.

BC Transit congratulates Jeff Birtwistle and the rest of the team for their tremendous impact on this View Royal family and their wider community. This is just another example of the work BC Transit employees and operating partners do across the province to support emergency services in many ways.