Deaths of notable Victorians (and others)

It is with great sadness that Golf Canada, the Canadian Golf Hall of Fame Museum as well as the entire golf community mourns the loss of Margaret (Sutcliffe) Todd, who passed away July 15, 2019 at the age of 101.

Born May 31, 1918 in Montreal, Todd was a pioneer in Canadian women’s golf. A natural at the game, she won three British Columbia Amateur titles, two Canadian Women’s Senior titles and played on a host of teams, including Canada’s first international team to Great Britain. She also won the Victoria Golf Club championship an astonishing 14 times.

In 2010, Todd donated $100,000 to her alma mater, the University of Victoria, for the creation of the Jack and Margaret Todd Women’s Golf Award, an athletic scholarship awarded annually.

Front page of the Times Colonist:

It's been a while; let's see who stands head and shoulders above the below-ground set:

Bill joined the Royal Canadian Navy Reserves in 1947, Royal Canadian Navy in 1950 and retired in 1965. He then moved to Commercial Sales for Times Colonist, Fleming Printing, Manning Press, and Hemlock Printers to 1991. He was instrumental for the UVic Stadium as Manager rep for Saanich, Hornets Football teams as General Manager, Director of Local Football Committee, Victoria Cougars Hockey League as Public Relations, Membership Chairman for Saanich Chamber of Commerce and 40 Years with Gyro Club of Victoria, where he was President in 1976-77. He was a Lifetime Member of The Chief and Petty Officers Mess, The Korea Veterans Association of Canada, Inc. and The Canadian Tribal Destroyer Association. Bill was active in sports in his early years, hockey, football, stock car racing and curling. He volunteered at The Lodge at Broadmead teaching people how to use a computer.

George Peterhegyi escaped the 1956 Hungarian revolution by coming to Canada and working as a dry-cleaner, gardener, logging camp employee and VGH worker. He invented a vacuum press ironing board:

Brian Lawless has died aged 81. For many decades he owned Town and Country Realty & Insurance.

Award-winning designer and builder Bruce A. Cooke was responsible for many of our city's classic 50s and 60s modernist houses like 5069 Lochside and 4135 Barber St. shown below (current location unknown). 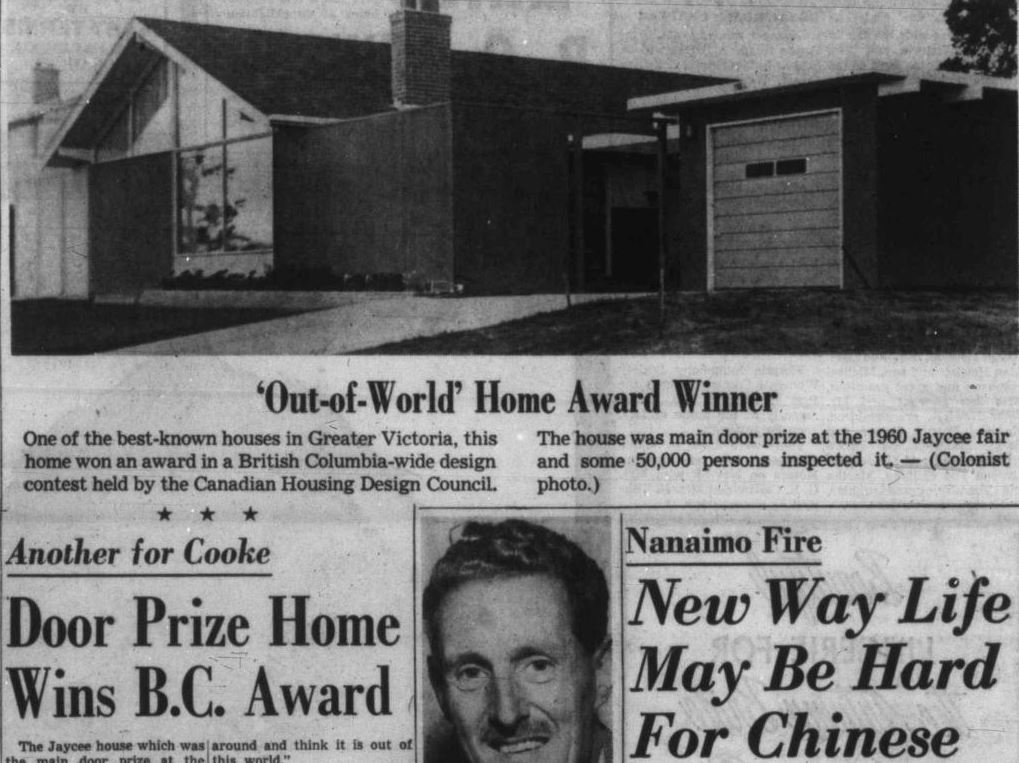 It cost me about $700 last time I ran my obituary in the newspaper, how much do you folks charge?

Better known as "Hunky Bill," Konyk dished out his trademark Ukrainian-style perogies from his station at the Vancouver exhibition for 52 years. The PNE confirmed his death in a statement on Wednesday.

"It is with incredible sadness that the Pacific National Exhibition acknowledges the passing of one of our longest standing concessionaires and iconic members of our Fair family, Bill Konyk, known across the Canadian fair industry as Hunky Bill," the statement read.

"Bill passed away peacefully last night, surrounded by his family."

Hunky Bill was his self-adopted nickname and the trademark for his perogy, restaurant and retail businesses. It also prompted a B.C. Human Rights complaint in the 1980s when a group claimed it was a derogatory term.

An account of the 1982 decision in The Vancouver Sun says the complaint was dismissed by Human Rights Branch chairman Dermod Owen-Flood. In his decision, he reportedly quoted “Alice in Wonderland,” saying “words mean exactly what the speaker intends, nothing more and nothing less.”

It cost me about $700 last time I ran my obituary in the newspaper, how much do you folks charge?

VV notices are free but we may make up stuff about you.

Newspaper notices are expensive. As this Axios article notes:

Obits, alongside public notice ads, are one of the last remaining consistent revenue streams that local newspapers rely on, although both are being challenged by the digital age.

By the numbers: In total, about $500 million in total annual revenue comes from obituaries, according to Adpay. There are more than a million paid obituaries created annually. For context, the newspaper market in the U.S. brings in roughly $25 billion in advertising and subscriptions combined.

There really is no substitute for a good old classified newspaper obituary. I was honoured to write one for my father and it was important to me that it be entered permanently in the newspaper of record so it could be read a hundred years from now. I didn't want it disappearing online due to an expired link.

a david foster song no less.  the lyrics are about the writer's girlfriend then a nurse locally here.

that's a skinny/big hair david and his first wife bj cook (still a victoria resident) cavorting beachside in the video.

Dave Richardson was a Canadian police officer at the time he wrote the lyrics for this song. The words were originally a poem written for his girl friend, which he passed on to his close friend David Foster. Richardson explained his lyrical inspiration in an interview: "In 1970 I was dating a nurse, whom I would eventually marry in 1971 (it only lasted four years, though - we were both not ready for such a commitment). One night I went to pick her up at her apartment, as we had planned on going out. When she opened the door I saw that she was upset to the point of tears. She still had a housecoat on and had her hair wrapped in a towel after a shower. She told me that two elderly ladies she had been caring for in the hospital had died that day at work, and she felt terribly sad about it, as she had come to know them fairly well over a period of time. Anyway, she more or less vented her feelings and I just listened. After she was finished, she thanked me for listening, and said she would get ready for our date. She went into the bedroom and closed the door, and I sat and watched TV waiting for her to come out. When she didn't return, I knocked on the door but she didn't answer, so I went in to find her fast asleep on the bed, still in her housecoat and with the towel still wrapped around her head. I guess she was just exhausted after her emotional day. So, I put a blanket over her, being careful not to wake her, and went home and wrote the song in about fifteen minutes or so. It was absolutely inspired. I have always felt that all I did was hold the pen in my hand, and that God did the writing.

The 'Be careful how you touch her, for she'll awaken' part, refers to when I put the blanket over her. 'The way she's always paying, for a debt she never owes…' - It wasn't her fault that the two ladies had died, and yet she felt so badly for them that she was crying."

"Be careful how you touch her, for she'll awaken
And sleep's the only freedom that she knows"

One of the titans of BC radio passed recently; John Ansell was an influential as they come in this province and had a nearly 50 year career - starting during the Second World War - including many years helming CJVI then later chairing the station's advisory board in the 1990's.

His powerful influence on the media in this province completely aside, he was a darned nice man. I had the pleasure of meeting John on a few occasions usually at media 'old boys' coffee and lunch get-togethers. He was a good family friend and had an utter lack of ego, and an encyclopedic memory regarding media colleagues past and present. He was a huge radio presence in Victoria, Calgary and Vancouver. John passed at age 93 in a White Rock long term care home.


VV notices are free but we may make up stuff about you.

Newspaper notices are expensive. As this Axios article notes:
..........

..................
There really is no substitute for a good old classified newspaper obituary. I was honoured to write one for my father and it was important to me that it be entered permanently in the newspaper of record so it could be read a hundred years from now. I didn't want it disappearing online due to an expired link.


What is up with gouging the dead and morning guess that’s what the newspapers have always done. Substantially cheaper if you put it in the lost and found.

Tom Ferris, founder of Ferris restaurant, has passed away from cancer.

Note not to be confused with Tom Ferris local long-time school board trustee.

Speaking of cancer, Alex Trebek has finished his chemo treatments and begun hosting the next season of Jeopardy. This might or might not be temporary as pancreatic cancer is known to be tenacious.

It is with immense sorrow that I announce the passing of my friend, business partner and mentor Thomas John Ferris. Tom passed peacefully at home with his loving wife Sandy , daughter Paula, grandchildren Alexa and Max and pug Molly at his side. Toms short battle with cancer was faced with incredible bravery, stoicism and positivity, much like he lived his life.

His generosity and friendship has touched countless staff and customers alike and he, much like the restaurant he founded 28 years ago has become a victoria institution.

There will be a celebration of Toms life at a later date. In lieu of flowers a go fund me page has been created for the Thomas John Ferris Memorial Scholarship fund, a fund created in Toms honour to assist hospitality workers enrolled in post secondary education. Post secondary education was important to Tom and this fund will be supported annually through the restaurants.

We lost a great one today, when it’s your time be sure to look him up, he won’t be hard to find, he’ll be the guy lying in the field surrounded by a multitude of pugs

Recipients of this fund will be hospitality workers who show strong work place ethics, community leadership and maintain a high gpa.

David Flaig has died. He was the owner and operator of Lumberworld on Quadra which he co-founded along with the late Clive Piercy as part of the Park Pacific investment and development group.

Oh gosh. He’s the father in law of a long-time acquaintance.

lumberworld was a force back in the 70's and 80's.  i think the story behind it was those guys got little satisfaction from their lumber/building suppliers back then so they just started their own one.

Stuart Dixon's name was synonymous with the game of squash in Victoria. He operated the Victoria Squash Club on Cook St. and entered the Canadian Squash Hall of Fame in 2010.

oh yes at one time being on the squash ladder was the in thing.

There will be a celebration of life for (Tom) Ferris held for all to attend on Thursday, Oct. 3 at the Bayview Place Roundhouse at 253 Esquimalt Rd. from 2 to 7 p.m.

The celebration will include music, food trucks and a life-size cutout of Ferris for people to “get a farewell selfie with.”