This would be a Tapestry seniors residence - http://www.concertpr....com/retirement

175 units, 133 of them rental in the lowrise and lower tower areas, 42 of them condos in upper part of the tower

This is an early design and may be subject to change 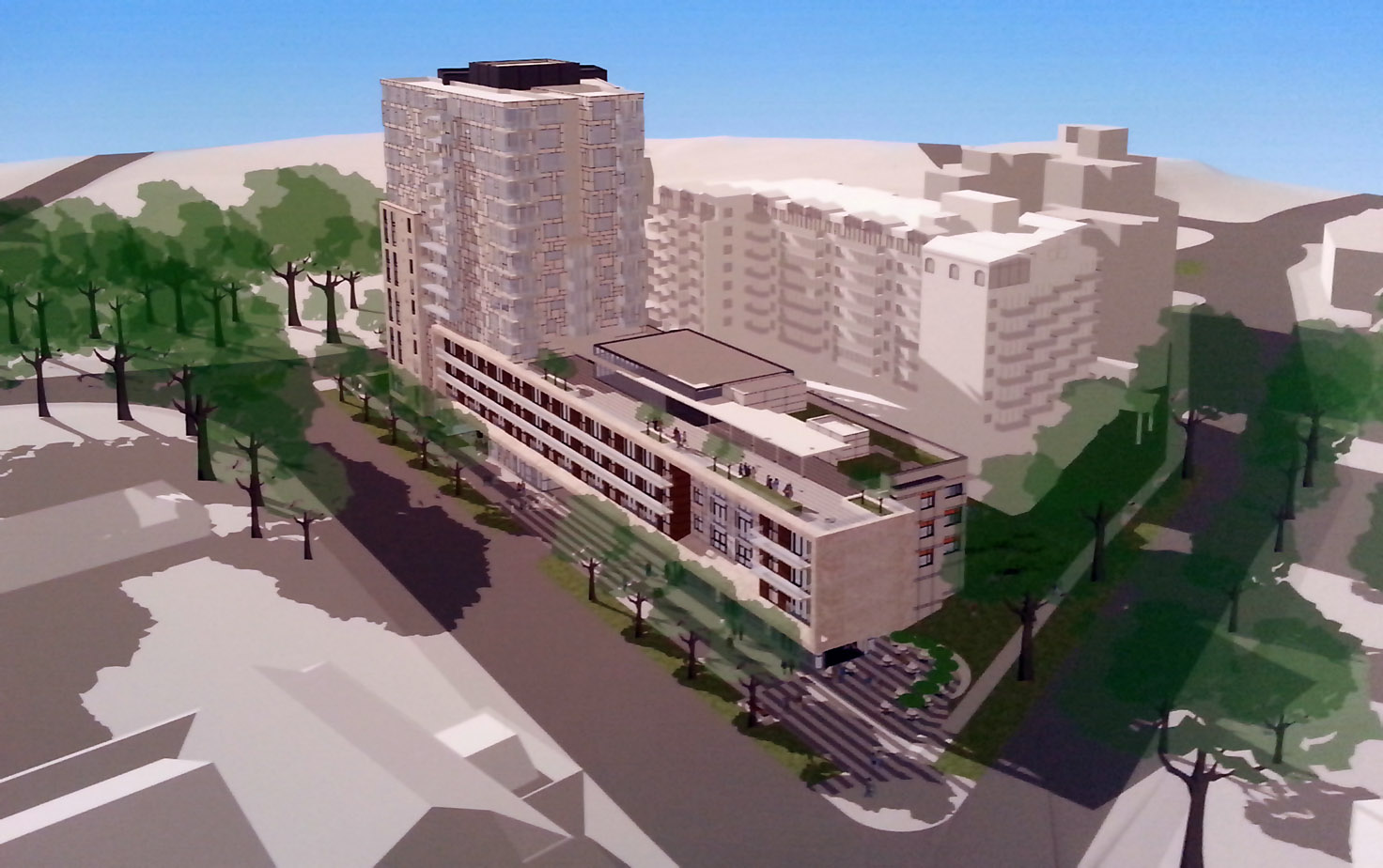 On the ground floor there is proposed to be commercial space on the corner, a driveway and parking area in the middle of the building, and operational functions at the bottom of the tower. Amenity space will be on top of the podium. 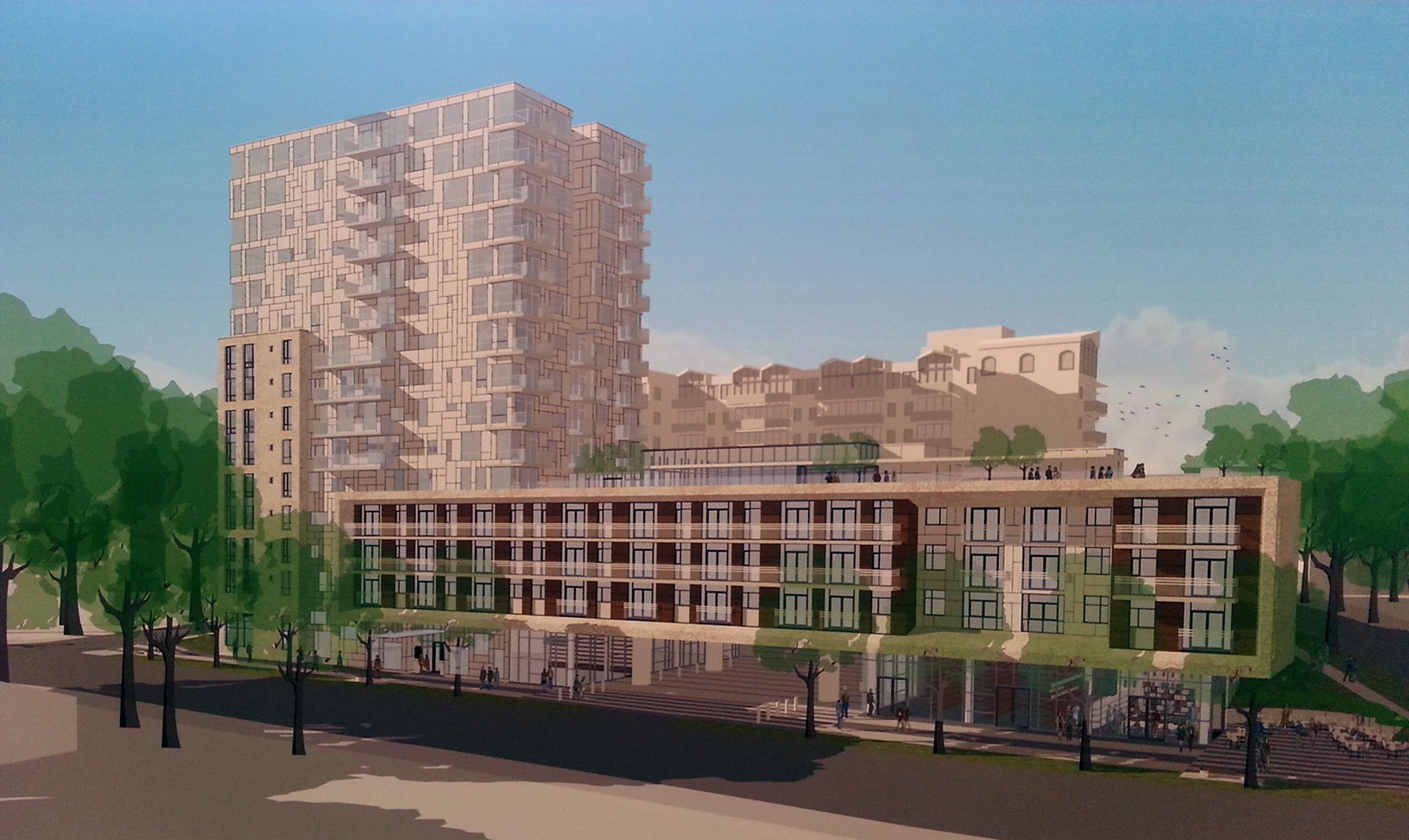 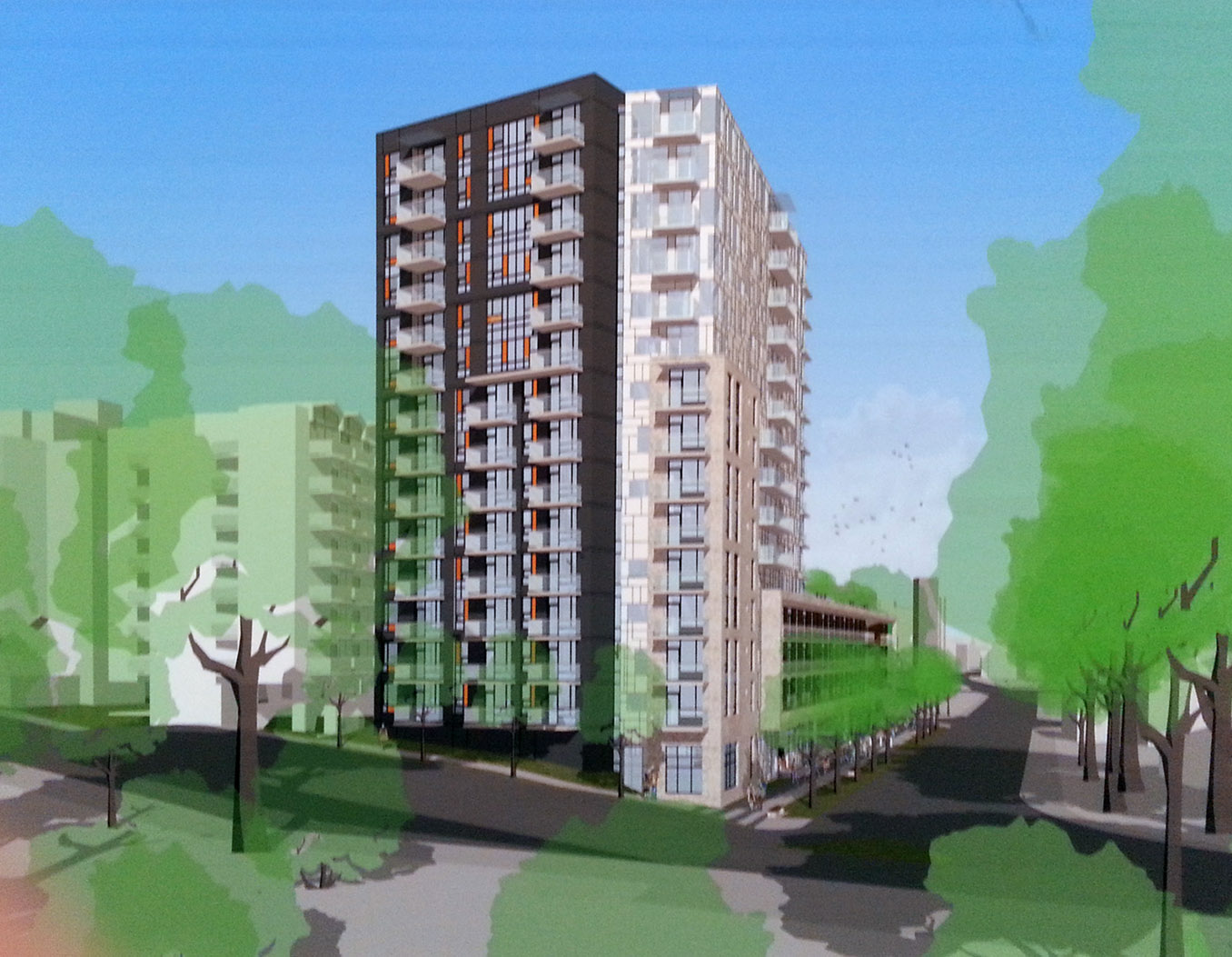 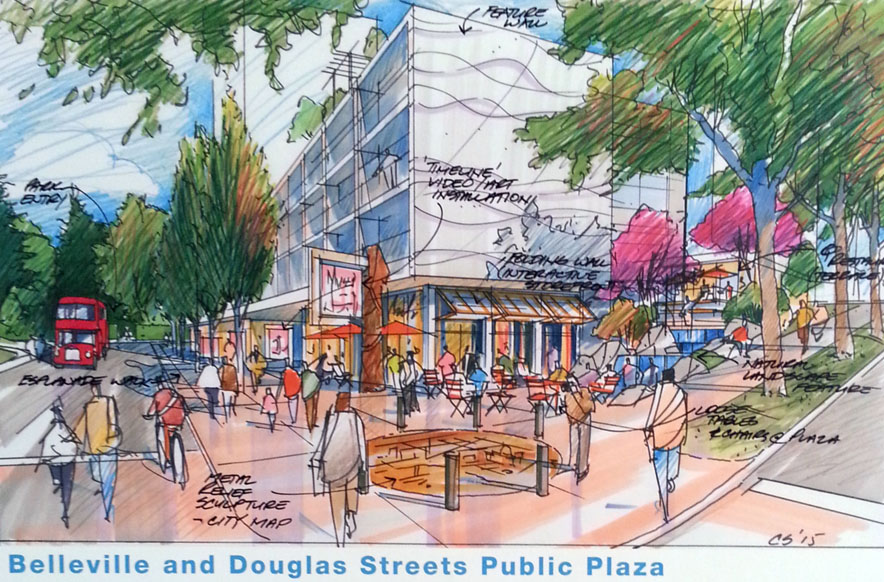 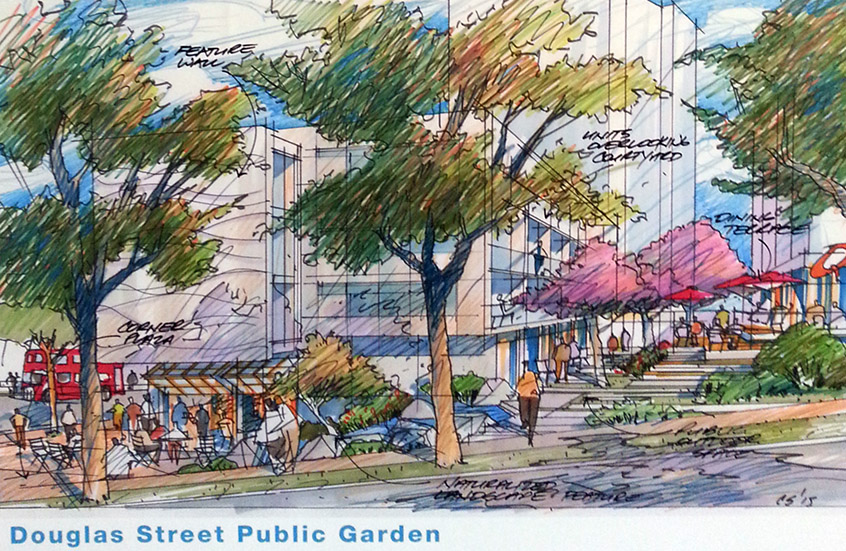 Jesus wept....for what might have been at this location. How short will that tower be when the JBNA gets through with it?

At first blush the tower is disappointing and the lowrise is awful. I'm flabbergasted. Concert has a bunch of great lowrise buildings in their portfolio. In Victoria they've already built a couple (365 Waterfront and Chelsea). I just don't get it.

For reference, the previous proposal by Westbank and James Cheng

It's much too institutional looking for this location. And I'm really surprised that the lowrise portion would be the worse offender as compared to the tower.

>>>This is an early design and may be subject to change<<<

Let's hope it is subject to change. That is ugly!

It's easily the worst design yet for this site. Not to sound too "Madoff-y", but this location demands something outstanding. The current proposal is anything but. Why not something with some curves or angles (other than 90 degree angles). The ground level is atrocious. The podium looks worse than the existing motel. When I dislike a mid-rise this much, there has to be something really wrong with the design.

why does every site demand something outstanding, which I guess means something like weird shapes, loud colours, etc. doesn't this site actually demand sensitivity to what's already there, like thunderbird park, crystal garden & st anne's, & new buildings shouldn't overwhelm them? not that I feel strongly one way or the other about these first renderings, it's just a pattern I think I see with every new building no matter where it is.

why does every site demand something outstanding...

Every site does not demand something outstanding (e.g. The Era on Yates), however due to its proximity to The Empress, St. Ann's, the RBCM and the Legislature, I strongly feel this location demands a project that goes beyond the tried & true. It's literally a once-in-a-lifetime opportunity to create something memorable in a highly visible and dare I say "sensitive" location.

I don't have a problem with the overall building design but definitely agree that the pictures aren't selling me on it. Hopefully the next round of plans has a bit more detail and makes the podium look less like a hospital.

If it's not a grey concrete bunker or a faux red brick tower, I'm pretty happy.

I was at the open house yesterday. The design is meh to me but nothing actually objectionable.

The only thing I found odd was the design of the driveway/plaza/whatever in the middle that would see vehicles dirve through the middle of the building to access parking.

...doesn't this site actually demand sensitivity to what's already there

I'm really getting a bad feeling about the bus station. Methinks people will demand something "sensitive" there, too. Meaning:

a) a bland bunker, or

b) an absurdly gigantic house, or

c) a mocking red-brick imitation of the Empress Hotel

I'll take a quick moment from my vacation to say that rendering looks awful. I wouldn't want that built anywhere in Victoria.

Lets not rush into anything, we have time to come up with a design that everybody north, south, east and west of Langford is crazy in favor of. The right height, set back, color, mid block walk through, thin scraper, no views blocked, curves, red brick, aluminum siding, not over whelming but at the same time not under whelming, architecturally pleasing with an emphases on fitting in with the surroundings. Maybe we could offer some incentives to the developer and have some space created to house the maritime museum ...

Lets not rush into anything, we have time to come up with a design that everybody south of Langford is crazy in favor of....

So that would be Metchosin & East Sooke? 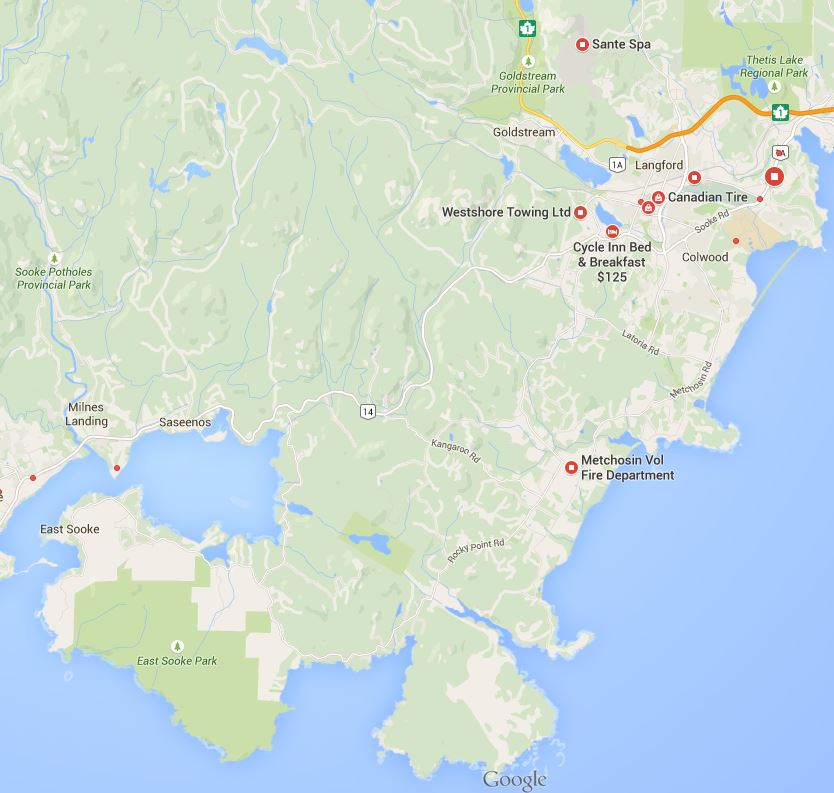 Prior to the unveiling of this new project we were spoiled by being treated to over a dozen James Cheng designs for the old Westbank plan, all of which included graceful curved facades and dazzling ramped gardens.

I think what could rescue this one would be some amazing attention to detail, additions which would set it apart from other condo projects. Keep in mind, any building ringing the harbour must be spectacular. These details must be visible from a block away and would keep rewarding the pedestrian as they approach. Interesting plantings and trees, meaningful art on that blank west wall, unique sidewalk treatment, quality materials where the building meets the ground and a real nice water feature this time. Not like "The Falls".

The architect for this project also designed Bayview I.

I attended the JBNA meeting last night and I was shocked to hear the positive comments in fact no one really had too much to say.  During the presentation when they unveiled 15 stories vertical with no step back 10 feet of the curb I thought here we go people will riot but no everyone was sort of not too bothered.  And the one women who did bring up the height the response was "its not a skyscraper it a backdrop".

I don't mind the height with step backs, we can't have just squat buildings, but I think in that neighbourhood it should be a landmark building, give them height but they should deliver something that can stand the test of time.