What type of careers do UVic visual arts grads go on to?

I only know one UVic visual art grad and he does merchandising for Burberry. Gets to fly around the world making sure the stores look good.

This one is going to Advisory Design Panel on May 23

This project is going to Council on November 22 with some redesigns. New plans are on the Dev Tracker and include lots of renderings. https://tender.victo...Number=REZ00621 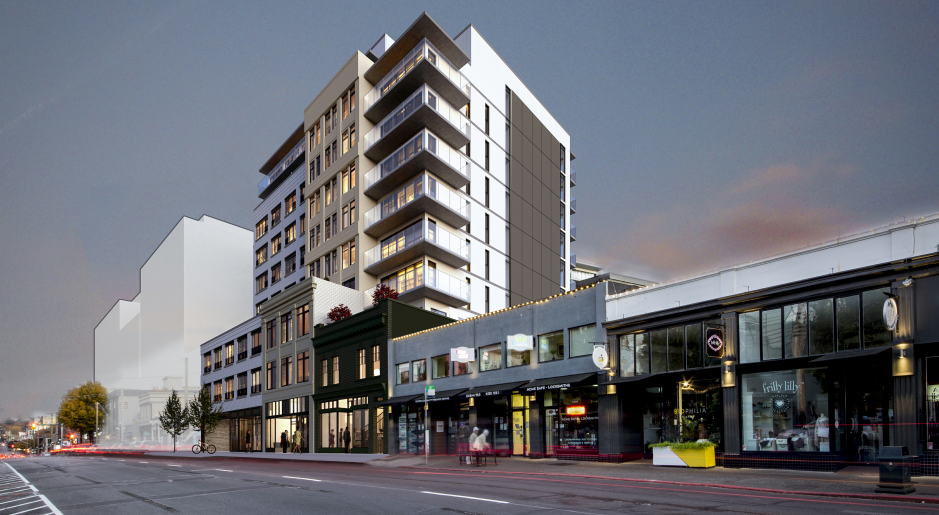 ^Going to be a lot of fresh eyes looking at this proposal. I am anxious to see how it's received by the new crew at council.

One of the positives is the retention of 819 and 825 Fort Street's façades. Thanks for the heads-up, Jackerbie!

Also, Musson Cattell Mackey, the architect firm that design this project, must be pushing well north of a dozen buildings built just in the downtown core over the last decade.

I wish there was more variation in height. I'd love to see it rise up to 12 floors at some point and drop down to 8 or 9 at others. I appreciate that would make for awkward floor plans, so we get another nearly-as-wide-as-it-is-tall "Victoria high rise special".

I wish there was more variation in height. I'd love to see it rise up to 12 floors at some point and drop down to 8 or 9 at others. I appreciate that would make for awkward floor plans, so we get another nearly-as-wide-as-it-is-tall "Victoria high rise special".

Except that there are two heritage facades included.

Just wait until council sees this. I can hear the cries of "Six Stories! Six Stories!".

With 100 units it should make calculating the number of affordable housing units that they need to commit to easy.

With 100 units it should make calculating the number of affordable housing units that they need to commit to easy.

^Yes, I hate that catch-all term "affordable". Like there's a magic lever a developer pulls and a suite's price automatically drops by half.

Methinks the very premise that there would be a market for "unaffordable" rental apartments in the 800-block of Fort Street is a bit hard to swallow.

Methinks the very premise that there would be a market for "unaffordable" rental apartments in the 800-block of Fort Street is a bit hard to swallow.

The developer has said that the units have been designed with the tech and service sector in mind. They're saving some coin right off the bat by asking for a parking variance, with only 44 residential parking stalls.

I'm liking the Fort Street side, but the south side still seems to be lacking in the personality department (insert joke about a VV member of your choice here).

On the top level I really think it would be ideal if there were a bit of a setback all around, with windows or inset balconies or terrace space etc. on both the east and west sides (no blank spots, in other words). Not going to happen, I know.

I have to wonder about the tax implications of providing subsidized housing.  If my corporation provided my house at say a 200k discount under fair market value, the CRA would be pounding their fist on my door looking for the income tax on the discount


Yup, someone has to pay for these units eventually. From what I understand these schemes are typically subsidized by marking up the market units; BC Housing funding in projects like Azzurro isn't the norm.

I wish I could be optimistic, but I'm pretty sure council thinking that they can just wish lower rents into existence will revert any progress that was made in speeding up approvals, increase red tape/costs even more and further increase the amount of people who'd rather die before moving out of their rent-controlled or subsidized housing. Sending us closer to San Francisco territory where if you're not an incumbent owner or a high-income worker... you either win a housing lottery or s**t on the streets.

This is going to CoTW on January 24 with recommendations to forward to a public hearing.

This is going to a public hearing:

No matter what developers do, the goalposts keep getting pushed further and further away by the lefties running the CoV...

While the project does not provide any “affordable” units, the applicant noted that based on current market rates it’s estimated that more than 50 per cent of the suites will rent to households in the “moderate” income bracket of between $55,000 and $85,000. However the applicant declined to put that in a legal agreement.

Coun. Jeremy Loveday said he expects a full explanation from the developer during the public hearing as to why the rental rates can’t be guaranteed.

Coun. Laurel Collins said it is exciting to have a proposal for rental in perpetuity come forward. But she said wants to see more detail about the proposed unit rents.

Oh, you're building a rental building? Cool. We do have a "housing crisis" [cue dramatic music and voice echo] after all.

Why aren't the rents guaranteed for perpetuity? We demand a full explanation! Why is this building not "affordable"?

The next phase is that rents will have to be approved by the city. Guar-an-frick-in-teed.