Yeah, it was a sketchy intersection with Humboldt left open. Closing that down was the right move. We could have done without the kitsch that accompanied it, or at the very least the arts trust could have moved the tulip canoe over for a couple of years, then moved it to the bridge now that we’re going to re-envision Humboldt with a group that knows what they’re doing (Diamond Schmitt and the gang working on Telus).

I'll be disappointed if somebody doesn't open a bakery called "Eating Humboldt Pie" in the base of this place.

It looks good but I'm still not sure I'm crazy about this building on this site. At Douglas and Caledonia or on Blanshard between Cormorant and Pandora I would be chipping in my own money to get it done. Dockside Green, Uptown.

Do we know what the rounded building is behind the DoubleTree in one of the renderings?

Build it already. This is the kind of beautiful building that Victoria sorely lacks.  It will fit in nicely there.

The new renderings and “What We Heard Report” reflect a significant improvement over the original and previous iterations.

It’s frustrating as a resident of Victoria seeing developers struggle and waste their own and everyone else’s time and money with poor initial proposals that are clearly lacking. Northern Junk stands out as a prime example, many of the earlier proposals, regardless of the requirements there were trying to meet, were just terrible. They were typical of a suburban apartment block, clearly not worthy of being one of the two gateways to downtown when crossing the Johnson Street Bridge. Yet a decade later they finally got it right, and yes, blame can be shared with the city for some of that.

Luckily Aryze has speed up the improvement process, yet, it’s rather ironic the report is titled “What We Heard”. From the start PPPDev’s response was to label anyone who questioned the proposal as uniformed and uneducated and standing firm on the original design. It was too bold and visionary for us boring Victorians he responded, yet in reality the original proposal was a boring blob. When Aastra states that it looks like something you’d find tucked away in Richmond, probably means there’s more than a little validity to this sentiment. I questioned the uniform glass wall, saying it would be better to break that up visually and that the street interaction was terrible. In post #372 on September 25, 2020 I wrote “If anything because of this location there should be greater setbacks and less site coverage”.

And what do you know, the new proposal reflects all of these points.. not because Zoomer said so, but because it was obvious to nearly everyone. The report proudly shows off how there is far better street interaction and alley design, heck even Gary Oaks (although the rendering wasn’t updated to show Garry Oaks). Setbacks and total site coverage has been reduced, the uniform Douglas street glass wall has been visually broken up, more consideration for the neighbours.. the list goes on.

I still find the entrance underwhelming and ordinary, but impressed by the degree of attention and improvement elsewhere. For the back wall facing Aria perhaps poplar trees would be a great visual screen and add nice greenery for the condo residents; although, I’m not sure if they are better suited for a downtown location than Garry Oaks. Likely so.

PPPDev, Vibrant Victorians are probably some of the biggest supporters you’ll have for supporting increased density. Hopefully you’ll be less defensive in the future and reflect listening from the start (although no need to agree) rather than issuing a report a year or two later with that title. I wouldn’t under estimate this group - where else will you find a captive audience who obsess over every nut, bolt, mullion and spandrel on dozens if not hundreds of buildings in Victoria and around the world for decades now, as well as urban planning discussions and debates.

This is moving to a public hearing:

This is moving to a public hearing:...

That aught to be a fun time.

This is moving to a public hearing:

the City owns the property.  they hand-picked the proponent.  how would they turn around and now veto the project?  of course we are talking about this council.

the City owns the property.  they hand-picked the proponent.  how would they turn around and now veto the project?  of course we are talking about this council.

The City has their money. Typical response would now be to screw them over!

isn’t the sale subject to rezoning? They might not have their money yet.

He owns a unit at the Parkside Victoria… possibly the new taller Telus building would block his view? 😂

This building is going to kill thousands of birds, over it's life span.

The Victoria Harbour region is a migratory bird santuary.

Aside from this, this massive glass structure is so inappropriate for a world class "green" city.

...this massive glass structure is so inappropriate for a world class "green" city.

Victoria is neither world class, nor green.

Are we saying this second architectural obstacle might be too much for those lucky birds who manage to get over the Empress Hotel? They'll be cruising along thinking they're in the clear, followed by sudden exclamations of "what the?!?" or "where the heck did that thing come from?!?"

I can vouch for that. Many times I've had a cat fall on my head because it pounced at a passing bird from the top of a highrise building (and missed its target, need I state the obvious). That particular cat has way more than nine lives, no doubt.

Just keep the Telus building inside, crack a few windows to let it stick its head out, and don't leave the door open accidentally. This way you can protect it from the non-sequitur nimby objections peppered with unnecessary punctuation.

Not sure this is the proper thread for this, but not sure where else it would go. It's been a topic of contention for the past couple years now, but until last night, I hadn't actually used the table tennis court on Humboldt. I was always supportive of it - I think things like this are great for public spaces and lead to a more vibrant downtown. I know the majority on here will disagree, but nevertheless. And as I said, sure I think it was a good idea, but I just never got around to trying it out.

My partner and I decided to go to Bartholomew's Pub for dinner, and when we walked past we saw a couple guys using the table - they looked like pretty legit players, had their own paddles, bikes right there, it looked like they had biked there specifically to play. We had a table inside near the window, and every time I turned out to look, they were still playing, or on a beverage break. All in, they must have played for maybe an hour after we got there.

On our way out, we noticed it was empty, so I suggested why not play for a bit? I went back into Bart's to get a pair of the communal paddles. I was then told that they are now given out at the hotel lobby, one floor up. So I went upstairs and asked at the front desk. Now the guy upstairs seemed a little perplexed - you could tell he doesn't get asked for the paddles often. He had to speak to someone else, and was finally able to find them. He asked what room I was staying in, and I just said I wasn't a guest, but I will bring them back. Now the paddles he brought out were pretty legit, good quality, but they were still wrapped in packaging, we must have been the first to use them! 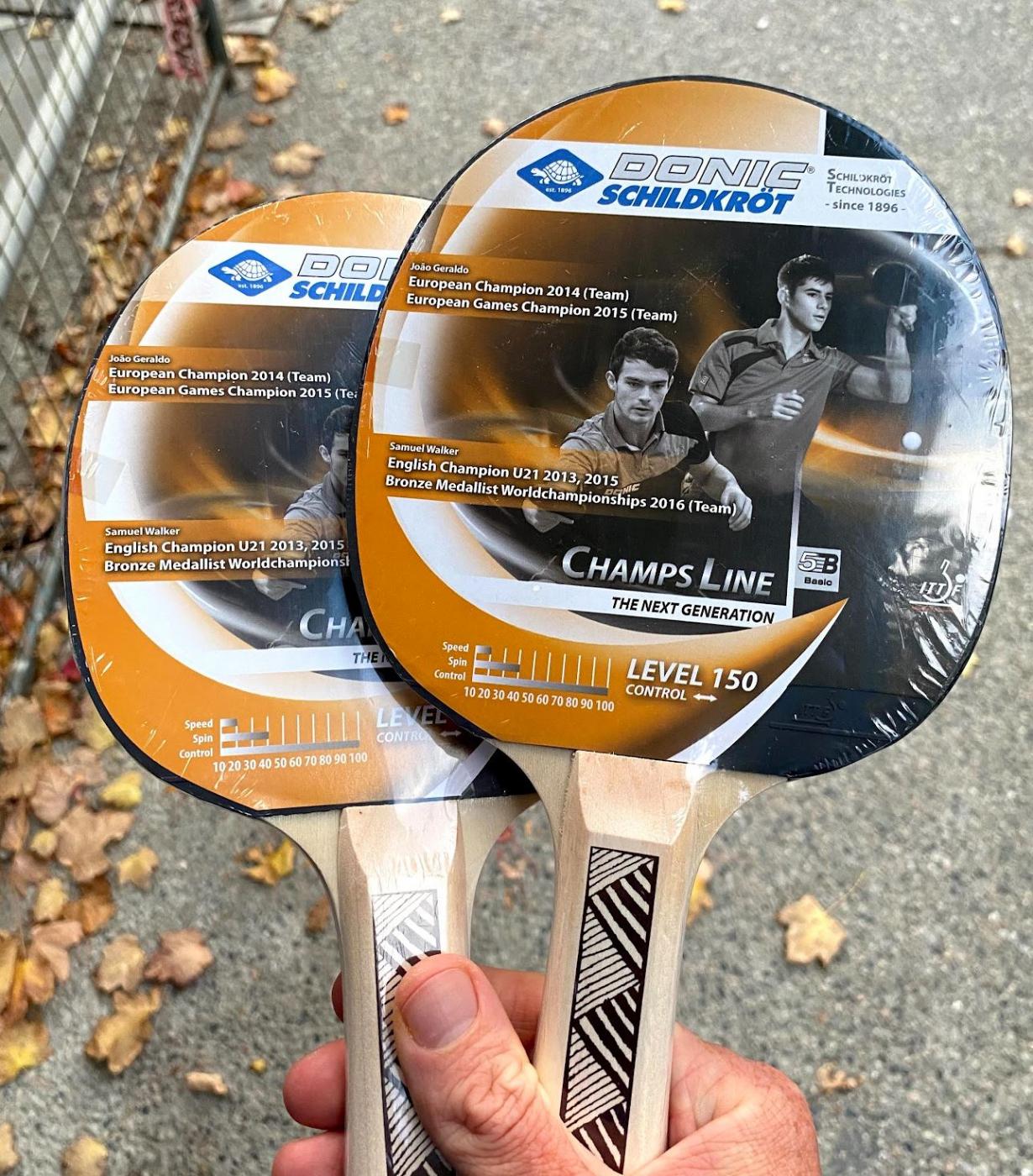 We started playing, it was a little breezy, but it never had an impact on our shots. The ball never got close to rolling out into traffic, as some opined that it might. Just had to chase it down in the bike lane a couple times. The table was really good quality too. No signs of wear and tear, just a small piece of faded graffiti in one corner.

Ten minutes into playing, a couple ladies showed up, and asked if we would be much longer. They mentioned they came earlier and there was a wait to get on, so they came back now instead. I mentioned we wouldn't be too long, maybe 15 min. Shortly thereafter though, they ended up leaving, so maybe we took too long.

Overheard some positive comments from passerbys as we played and even had a couple people come up to us and ask where we got the paddles from. We must have ended up playing for ~45 min. All in, it was pretty easy to play and I'll definitely be back sometime. I'm just a little choked that I waited until nearly October to try it out, as the nice sunny days will be at a premium for the next few months.

The table will be moving soon to Broad Street, btw.

Interesting, I did not know that. Do you know when it is moving there? And the block by Pags?