How did it fade?

Approved. Nobody opposed, but I couldn't tell if Isitt abstained.

aastra will be surprised to learn the housing crisis only started a few years ago at best:

A number of speakers at Thursday's public hearing warned council against overriding the official community plan to allow for increased density on the site. They voiced concerns as well about noise, dust, shade and the wisdom of locating emergency services in one building.

Others, however, highlighted the desperate shortage of affordable housing in the city as well as the need for a state-of-the-art fire hall that can withstand a major earthquake.

In the end, councillors argued that the ongoing housing and climate crises justified amending the community plan to allow the project to proceed.

"One of the problems with the official community plan, and the way that it's used sometimes, is that it's wielded as a shield against change," Mayor Lisa Helps said. "And I don't think that's right."

She said council wasn't in the middle of a housing crisis when it approved the official community plan in 2012 or it might look far different today.

Helps is not a fan of the CALUC process, that much is certain.

The issue of dust, though, that’s new.

The current CALUC process came in like fifteen years ago. Perhaps it is time to look at it. They are unelected and apart from some very light rules can basically do what they want in how they reflect back "public opinion". Perhaps just some structure for the templates that show their process.

"We had 100% of local residents opposed to a development at out CALUC meeting. We sent notification of the meeting 500 people and 4 attended."

Just for some context.

Either way I am so excited by this project I can hardly wait to see the further design iterations.

It's sort of refreshing to see the NIMBYs try on a new tactic dontcha think?

I have heard a dust complaint about the construction process before. If the development causes dust over the longer term that is alarming. That said some dust is human skin cells so maybe from all the new residents?

What's the timeline for this development getting underway?  I assume the fire hall component will come first.

Approved. Nobody opposed, but I couldn't tell if Isitt abstained.

Based on the video, he was neither yay nor nay, so looks like he abstained.

Older Victorians are reminiscing about the good ol' days, all the way back in the early 2010s.

The housing crisis seems to be one of those things that remains unprecedented and new every day. In the year 2030 we'll be saying the housing crisis started in 2025. And today's young people will be getting lectured by their kids re: they have no idea what it's like to hunt for an apartment, to have to share an apartment, to pay high rent, to be burdened by a big mortgage, etc.

My sense is that this project's approval will be a factor in favour of Chard's Cook Street Plaza proposal; height concerns won't carry as much weight given that CSP's taller building is only 12 storeys.

Two immediate outcomes from last night decision; future proposals will treat the OCP as a mere suggestion and property owners of sites zoned for six storeys will be pricing them as 15 to 20 storey potentially. Which won't bring housing prices down as the new owners will plead poverty to council, "We need 20 storeys to make any profit off our purchase".

Wasn’t much of the site already zoned for the height the developer pursued? The zoning permitted more than the OCP, in this case.

In this case those wide and rather ordinary looking levels above the firehall aren't just less than ideal for people living on the other side of Johnson, but they'll also impact the units on the north side of whatever tower eventually gets built on the Yates Street side of the Mazda property.

Also, methinks it would not be good at all for the remainder of the property to get built out with a uniform look. Ideally this entire project would have at least three distinct parts, if you get my meaning. 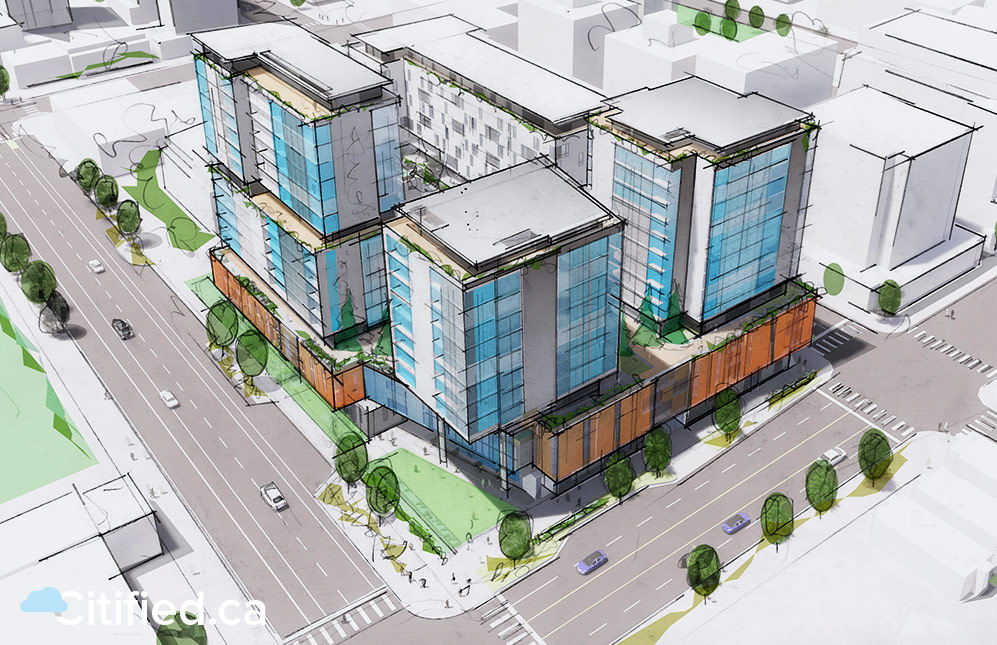 ...methinks it would not be good at all for the remainder of the property to get built out with a uniform look. Ideally this entire project would have at least three distinct parts...

I imagine the full build-out of the site will occur over the better part of a decade. Hopefully some variation in aesthetics will be possible over such a time frame. Of course, one need only look at the Bayview development to suggest that perhaps I shouldn't be so optimistic about variety in the finished product.

I imagine the full build-out of the site will occur over the better part of a decade. Hopefully some variation in aesthetics will be possible over such a time frame.

Dude, you're reading my mind. I hope it plays out as you say.

We've talked about the urban granularity issue many times. This block was going in a decent direction in that regard, what with the restaurant building on the corner, 1030 Yates, the Bossi House, & the small apartment building beside it. I really hope we don't end up with one big thing on the Mazda property that goes overboard with a uniform look-and-feel.

Which reminds me, whatever happened to that old proposal for that little lot beside 1030 Yates? That would have been exactly what the doctor ordered re: granularity.