62 replies to this topic

Anyway, back to pedestrians. I agree that most probably DO know the rules but many can't be bothered to follow them. It is maddening to see a light about to turn red and some bozo decides to start shuffling into the crossing, appearing completely oblivious.

Whereas vehicle drivers are known for their adherence to the rules of the road.

Whereas vehicle drivers are known for their adherence to the rules of the road.


To be clear, I think a lot of motorists are dreadful, too. And a bunch of cyclists. My broader issue is with humanity as a whole, but I'm trying to keep my digs on-topic.

I agree... I don't think anyone dismisses the fact that divers disregard many road rules... humanity sucks right now.

I blame him for a lot of things. Not only is he a convenient scapegoat (short user name), but he's also a good sport about it. It's refreshing to see that.

I agree... I don't think anyone dismisses the fact that divers disregard many road rules... humanity sucks right now.

I don't know, they seem to make a nice clean entry usually, and typically only go when the zone is clear.

^I did say most... generally 80% of the time I get a driver to stop a a nid block croswalk.

Is someone on a mobility scooter a pedestrian?

It's a level above your regular Traffic Control Person.

this guy picks apart a previous writers calculatuons but then throws in his own erroneous information.

Blanshard Street is currently designed as an urban highway, creating a major barrier to pedestrian travel. The proposed crosswalk is about 200 metres from existing pedestrian crossings and so would save up to 400 metres, about seven minutes, per walking trip, a significant improvement.

it’s not 200 m from each intersection and the 400 m round trip also assumes the person originated from the furthest possible point(s).

seven minutes saving on a round trip to Wendy’s does also not seem too onerous.

The distance from Bay to the new crosswalk location is not even 150 meters, and a 2 minute walk according to google. An average individual will walk that distance in approximately 1:30 seconds, if not faster.

Forgetting for a moment about the future bike lane that is proposed to go here, what reason do pedestrians need to cross Blanshard at Kings? What services/businesses can only be accessed here that the existing Hillside and Bay controlled intersections don't already accommodate?

Do the residents of Evergreen Terrace have an unusually high interest in visiting the CHEK TV studios? A potent need for a shortcut to the backside of the Times Colonist building? Perhaps Subway is their only source of nourishment?

Victoria Crosswalks are Hazards
Moved here two years ago and have had at least 6 close calls just missing pedestrians in crosswalks.
They are numerous, and inconsistantly marked.
Cars park immediatly beside them so many times peds are hidden until the last minute before they dart out.
Others loiter on sidewalk so dont know if going or not.
In Ottawa, you stand on curb and point in your intended direction of travel so drivers. have a warning of your intent. Works well.
Amazed there arnt more fatalities here.

I'm still of the opinion that there is already a perfectly legal unmarked crosswalk at this location per the motor vehicle code. And that was is really being discussed is not a "new" crosswalk, but the upgrading of an unmarked crosswalk to a marked crosswalk, which is designed to enhance safety and avoid accidents to the benefit of all the users of the road.

I think that when the issue is discussed in those terms, then the whole "let them walk 300 meters out of their way so I don't have to slow down" issue is a little harder to defend. What IMHO is really being said is, "let's mark the crosswalk so the incredible number of Victoria drivers who think only marked crosswalks are legal crosswalks don't accidentally kill some one in an at-fault accident."

Can anyone provide evidence that this site is somehow exempt from the MVA? Maybe there is an exemption due to the median, but I haven't been able to find it.

"crosswalk" means
(a) a portion of the roadway at an intersection or elsewhere distinctly indicated for pedestrian crossing by signs or by lines or other markings on the surface, or
(b) the portion of a highway at an intersection that is included within the connection of the lateral lines of the sidewalks on the opposite sides of the highway, or within the extension of the lateral lines of the sidewalk on one side of the highway, measured from the curbs, or in the absence of curbs, from the edges of the roadway;
Otherwise I think people are arguing from a false premise.

Maybe if folks are that eager to get a Baconator, the extra few minutes of walking would be beneficial. Isn't that encouraging more exercise?

On the Isitt scale this idea doesn't even register on the Wacky-o-meter, but it doesn't seem like a big priority either.

Its based on some worn grass....what about the areas that dont have grass? ie Douglas with the only crosswalks between Bay and Mayfair located at Hillside, and Burnside....thats a bit of a walk across a similar sized road.

It plays to an audience and provides justification for the 40 or so bikes/peds that may use this route as a crossing....lot of money to spend for a few people that cant walk to the corner like they have to at other roads

Its based on some worn grass...

Since this is all it takes to get a controlled pedestrian crossing, I think I'll have to do some creative foot dragging here: 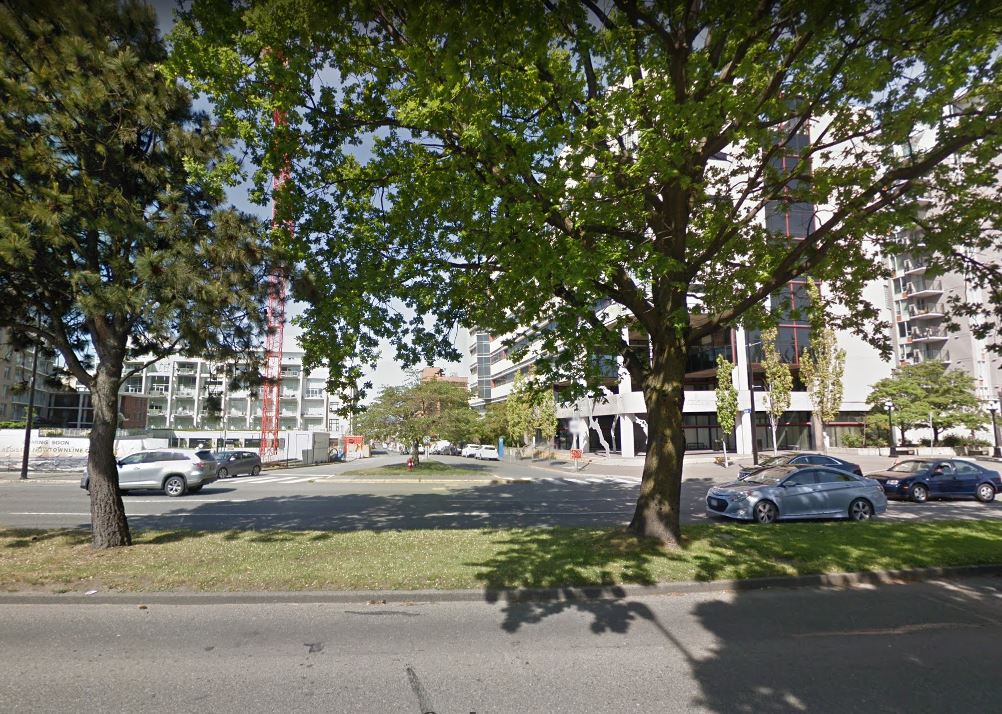 Only a real chump would walk all the way to Caledonia or Fisgard.

I like this idea to give pedestrians a heads up when they are crossing illegally....

Life's a journey......so roll down the window and enjoy the breeze.
You're not quite at the end of this discussion topic!