82 replies to this topic

Good documentary on Netflix about a guy who studied and then gamed the Price is Right forcing major changes. https://www.netflix..../title/81092327

I hope this new champion doesn't last long, don't care for her at all.

she outbuzzered him. could mean she’s real good. and did not get a single question wrong. and she’s only 27.

I couldn't believe she was blowing him away on the signalling device toward the end of the game. I was starting to think James was throwing the game but his sophisticated final wager shows he was desperate for a win right till the end. It's a mental game and I think Emma just rattled his confidence.

the new champion has 3 wins so far.

And now she is done, I was watching just to see someone beat her.

The three top money winners in Jeopardy history will vie for a share of $1.5 million US in January.

ABC and the quiz show's producer said Monday that Ken Jennings, Brad Rutter and James Holzhauer will compete in prime-time episodes on the network.

The first contestant to win three matches will receive $1 million. Each runner-up will take home $250,000.

Alex Trebek will host the contest, titled Jeopardy: The Greatest of All Time and debuting 8 p.m. ET on Jan. 7.

Rutter is the top all-time money winner with $4.7 million, followed by Jennings with $3.4 million and Holzhauer with $2.7 million.

my money is squarely on holzhauer.  so presumably this could last all week or even into week #2.  ratings bonanza i'm sure for the abc television network.

Can't wait. My money is on Holzhauer as well. However, these guys are super smart and excellent Jeopardy players. What could happen is that James will bet big but miss a key Daily Double, and that would give the slightly less daring Ken or Brad a critical win. I can't help thinking though, that this may be the culmination of the show, and Alex's career. Who knows what will happen in the autumn of 2020. Will it be a new format, new host, new look show? Or will Jeopardy be put to pasture after all these years, as we mourn Alex's passing? I hope not.

White will host Wheel of Fortune for three weeks. For the first two weeks, Mickey and Minnie Mouse characters will take over her spot with the letters, while surprise guests will stand in at the board during the third week. And the best perk that accompanies hosting the show? White got to ditch her famous heels.

They're the three highest money winners in "Jeopardy!" history, and

- they'll be competing against each other in the show's 'Greatest Of All Time' (G.O.A.T.) challenge, in front of America. The multiple night series, hosted by Alex Trebek of course, will consist of multiple matches. The first to win three, receives $1 million and the title of 'JEOPARDY!' G.O.A.T. Runners up will each receive $250,000.

When we heard the news, we ran straight to our old friend and local legend, Ken Jennings, to see how he was prepping for the big challenge. Little did we know when we were talking to him about "Life After Jeopardy!" in 2018, that they show wasn't quite done with him yet!

"I've known about this [G.O.A.T. competition] for months, but was sworn to secrecy," said Jennings, who became a household name after his record 74-game winning streak. His winnings total $3,370,700. "I couldn't have been more excited when I heard about it."

While a player himself, beneath it all - Jennings is just a big fan of the show too.

Turns out, he wasn't alone. Social media has been blowing up since Jennings' run, with appeals to the show to do a showdown.

"Hundreds of people online started saying 'When are they going to do the big showdown! We have to get Ken and Brad back to play James!" he said. "The 500th time I heard it, I thought, "Jeopardy!" probably is hearing this too, they are no dummies. They know if this is what the people want." 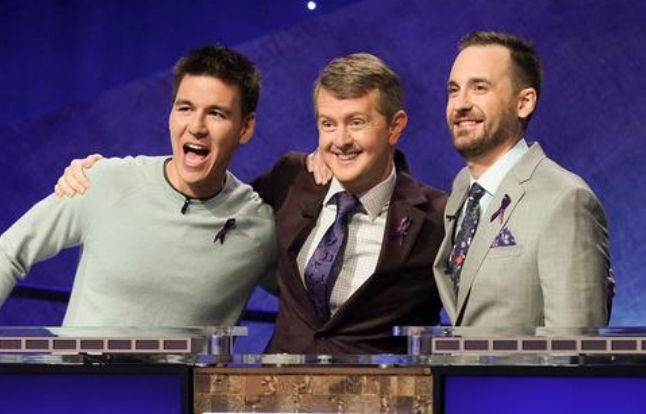 show moves to prime time for this tournament:

G.O.A.T. starts at 8 p.m. PST Tuesday, January 7 on KOMO 4 - and runs, at that same time nightly, through the 9th (additional shows may be added if necessary).

Jeopardy! titans compete for $1M, 'greatest of all time' title - Trio 'can have fun trash talking without anyone punching down,' says Holzhauer

Rutter enters the contest as the top winner on any TV game show with $4.69 million in Jeopardy play.

Jennings holds the winning-streak record, 74 games, and has collected $3.37 million. Holzhauer set and broke more than a dozen records for the largest single-day winnings, won the 2019 Tournament of Champions and earned $2.7 million in winnings.

Rutter is the veteran player, making his first Jeopardy appearance nearly 20 years ago, in October 2000, when champs were "retired" from regular-season play after five victories. Jennings' first game was in June 2004, a year after the rules were changed to allow players to rack up unlimited wins.

Subsequent tournament play has seen Rutter consistently triumph. But Jennings can claim a qualified exhibition victory: During a 2011 face-off with IBM's Watson, the computer won, but Jennings topped Rutter to come in second.

But each night of the tournament consists of two games, with the points from each added up to determine a winner, and Holzhauer edged out Jennings 8,200 to 7,800 after Game 2’s first round. Rutter fell behind by zeroing out twice on a pair of incorrect Daily Double responses (ouch), and Holzhauer held a slight lead going into Final Jeopardy. He won Game 2, but Jennings’ big Game 1 win helped him eke out the overall Night 1 victory, with a total of 63,400 to Holzhauer’s 63,200. One down, two more to go!

Thanks for spoiling that for everybody.

Thanks for spoiling that for everybody.

y'all don't have time shifting channels?  you still using rabbit ears to pull in your tv signal?

i even use time-shift to watch live sports.  and place bets on the games after they've already ended in many cases.

^I could google the result if I wanted to but I didn't, nor do many other folks.

You may think it makes you important to be the first with this sort of news, you're mistaken .


Life's a journey......so roll down the window and enjoy the breeze.
You're not quite at the end of this discussion topic!

Use the page links at the lower-left to go to the next page to read additional posts.
Back to General Discussion