Pick your poison. Which pile of BS has the least offensive smell? The pile on the left or the pile on the right? Exercise your free will to choose between them.

Media gatekeeping is all about keeping minds trapped within the confines of false dichotomies. Funny thing about choosing the lesser of two evils: no matter which one you choose, you're choosing evil.

Just be glad you’re not the guy forced to drive either car.

Just be glad you’re not the guy forced to drive either car.

But the rest of us are passengers in one of those cars.

David Eby’s idea of municipalities automatically allowing zoning as per the Official Community Plan is a much better solution for creating housing that the ‘missing middle” solution that the City of Victoria has come up with. Eby’s solution still provides a modicum of control through the development permit process while providing the developer with properties to build more multifamily housing on.

The OCP was developed through discussion with all the neighbourhoods. The “missing middle” solution is clearly not supported by a majority.

Many people who do not support it worked hard and saved to buy a home and now pay property taxes that support the city. The support for the “missing middle” seems to emanate from those who seek a solution to our housing crisis that can better be achieved by Eby’s OCP idea.

Mayor Lisa Helps has indicated that neighbourhoods were not affected by the change in rules that allowed the division of larger buildings into apartments. I can assure you that the Rockland area was negatively affected and Victoria’s version of the “Uplands” was no longer. Property values went down.

If it is truly more housing they are attempting to create and not just their legacy, they should pass a bylaw requiring the OCP to be followed.

It would save a developer about $250,000 to provide all the plans and consultants reports required to apply for a rezoning — and about two years. 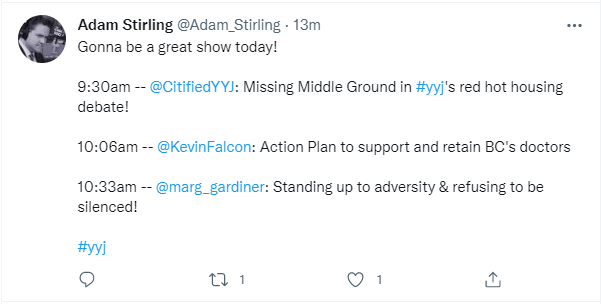 But that’s not a reason not to proceed with the policy, which one expert says will ‘make things less bad in the long run’

Sue Hiscocks, who has lived in the city for 18 years, waited more than two hours for a chance to express her opposition but left before her turn was granted.

Hiscocks told Capital Daily she does not believe the city has done adequate consultation on the policy and says without efforts to curb real estate speculation and investment, new developments could be bought up by investors rather than providing homes for residents. She would not have been alone in expressing those views, which were a common refrain among opponents and even some supporters at the hearing.

“I was going to say at the microphone … ‘Mayor, Victoria is full,’” Hiscocks said.

Not really representative of the opposition. Doesn’t mention the 800 letters and the ratio of opposition there nor provide a link to that. “Journalism”.