6 replies to this topic

Plans are up on Dec Tracker for Aryze’s new Quadro development at Quadra and Fisgard. 98 units of purpose-built rental are planned in a 10-storey building with at-grade commercial and underground parking. 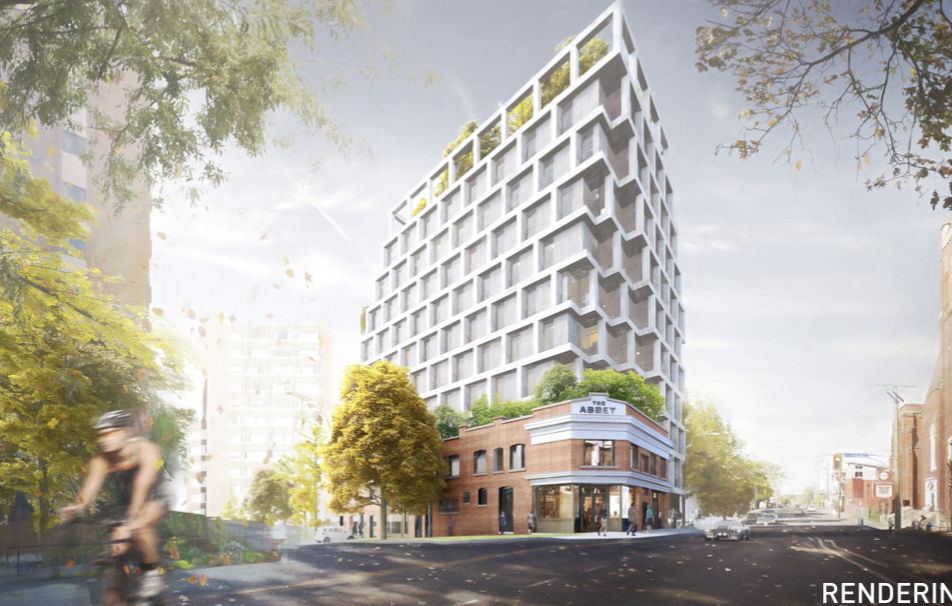 The design reminds me of the landmark Bjarke Ingels tower Vancouver House (near the Granville Bridge).

FFS, just destroy that little sh*tbox at the bottom.

Pam Madoff is going to have a stroke.


I think there is a good chance of approval: the 10-storey proposed height is actually less than what is permitted under the site zoning, and the height is also lower than both Sandpiper (12 storeys) and North Park Manor (16 storeys) nearby. This one might not need a full public hearing, though they are consulting via the CALUC process.

What's the problem? The little building on the corner looks great. If I didn't know any better I'd be wondering if you were a dyed-in-the-wool Victoria-style heritage advocate (where the acceptable options are limited to leaving an old building as is or tearing it down, all other possibilities excluded).

North Park should be making the effort to preserve the presence of these character buildings. Obviously in this case there's potential for 10 stories of new construction to overshadow the old facade, but to my eye there's something about the design of this new building and the relationship between them that enables the restored old facade to have a fair bit of pop.

Similar to Telus Ocean I expect significant design panel feedback will help the proponents figure out this current mess.

It’s as if they bought a stock semi-trendy design and plunked it down on one of the couple pieces of land they’re planning to build on. Problem - there is already a building there. I see zero thoughtful integration or understanding of context, nor even a bold purposeful contrast with the heritage podium.

There are dozens of possible approaches that could work better - a minimal modern white exoskeleton that could wrap around the podium and extend up into the tower portion. Think sleek modern tree roots, but without covering much of the podium - around the main entrance so that pops and makes a statement and then spaced widely after that. Carry that forward into the tower with a few more curves at least at first before continuing with the boxy design. Key is to not hide or obscure the podium but tie it in to one cohesive building.

The current design is begging for a setback, the above idea may help reduce the visual need for that.

Other possibilities include doing the exact opposite, with the heritage podium level appear to grow over and encompass the modern white tower - do so by incorporating brick or even modern copper toned elements. More likely to be approved because you’re not messing with ‘heritage’.