7 replies to this topic

Despite Metchosin’s housing needs report highlighting issues with affordability and the availability of housing for renters and seniors, Mayor John Ranns says there’s no plan to build more housing.

The housing needs report, prepared by the

Unfortunately due to the paywall I can’t see how the rural character helps seniors. I presume it offers safety. And quiet. Not sure what else.

Ranns said the report makes recommendations based on the needs of an urban community, not a rural one like Metchosin is.

He added that the district tries to be flexible with allowing people to run businesses from within their homes, add secondary suites to their homes and have mobile homes on their property, which he said should help solve the issues of affordability, seniors looking to downsize and the lack of rental housing options in the community. But he said building new housing would be ineffective, especially seniors-focused housing, when Metchosin is far away from most services seniors need.

“Do we basically condemn this community into being another Langford, another Colwood — is that good for the region?” he added."

Amended from my North Saanich discussion:


Far be it for me to defend farming. But can’t they like two things at once? Yes they quite like driving past the cows in the field, but they also like the concept of farming in the neighbourhood?

I just don’t think North Saanich Metchosin is the “solution” to our housing “crisis”.

And those that want to age in place there can extract a million or two from their home equity to pay for a cab to Langford once a week or a local person to change their diaper.

I mean, it's Metchosin, not Atlin.  The aging residents can find a ride to the doctor or the specialist or the cancer clinic.

4x the land mass of the City of Victoria, with 5% of the population.

Is the path of least resistance to put pressure on neighbourhoods in Victoria and concoct social forces like deciding racism is at the crux of houses there, or to start a conversation on housing in places like Metchosin?

Let’s just leave Metchosin out of it. In Rock Bay alone we can build 10,000 units. Then all the corridors I have identified time and time again here.

Is the path of least resistance to put pressure on neighbourhoods in Victoria and concoct social forces like deciding racism is at the crux of houses there, or to start a conversation on housing in places like Metchosin?

There are a number of examples where Helps has most likely hindered her cause by taking things too far.  Does insulting every man, woman and child in Metchosin help end racism and increase housing?  No.  It was a stupid thing to post on her blog.  It justifies segments of the population that have a different opinion than hers to label her as a nutbar.

...It justifies segments of the population that have a different opinion than hers to label her as a nutbar.

Only because she is a nutbar.

Yellow is the Hudson district, with over 800 units.  So maybe 1,500 residents, or nearly 1/3 the population of Metchosin. 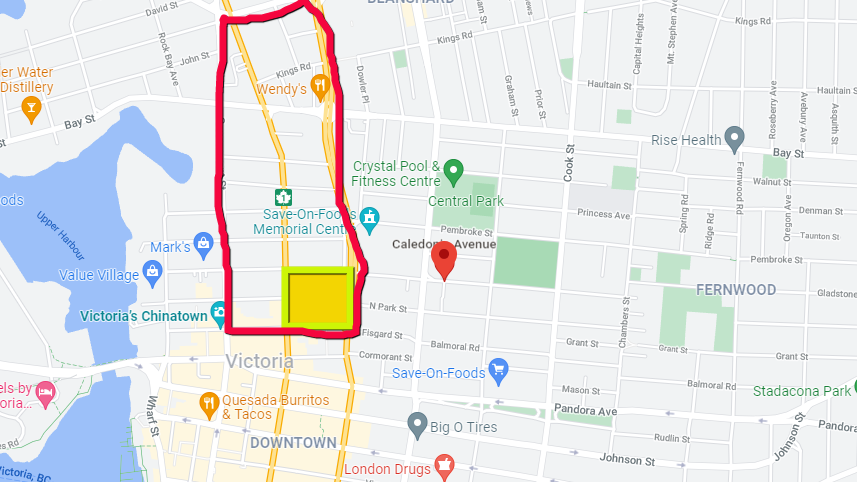 Build out RED with more Hudsons and you have easily 6,000 units.  More than double the population of Metchosin.