92 replies to this topic

My own community is changing very quickly. My neighbours and I didn’t sign up for that, it’s being forced on us. And the residents around here are starting to wonder why Sooke has to grow so fast and add so much density, but Metchosin doesn’t, East Sooke doesn’t, neither does Highlands, etc. That’s eventually going to put more pressure on low density areas of the urban core by virtue of development exhaustion in other communities. And believe me, there are many parts of the CRD exhausted by what’s happening on the construction front. It’s making a lot of people very upset, and this election could very well deliver an anti-growth message.

Interesting.  The Sooke Mayor is indeed hell-bent on growth.  The two Metchosin mayor candidates and it looks like every council candidate wants to preserve the rural aspects of the municipality.

About 25,000 people rely on Sooke's very limited commercial services now. Isn't that crazy? That's a bigger population than Port Alberni, which has about 18,000 people. But PA has a very well developed commercial base, proper road network, in-town transit, in-town jobs, and so on.

The other issue is, Sooke can't accommodate the growth it has set out to pursue. There aren't enough planning staff to handle the applications, the sewage plant is at capacity, and the road network is for a town of 10,000 people. People around here are not happy by how the growth has been managed, but it's happening.

Well the voters have some choices:

I have no idea how we can even begin to solve this problem when we have 13 different municipalities and sub parts within those municipalities that all have differing desires. Mike raised a very good point. If we focus hard on building up in the core, people who don’t want to live like that will want to move to where they do want to live. Which means demand for more suburban style SFH. That puts pressure on landowners in rural areas like Metchosin, west Saanich, blenkinsop valley, and east Sooke. I do not get the “we must preserve the rural areas” argument when it comes to land close to a major regional core. We need parks, not rural land in the middle of a city.

This is why I am grateful we are fractured into 13 different municipalities. Hyper localization is how we can defend ourselves from globalism where one desire is being force upon all….
I love parks but we really have no shortage. Rural areas produce and provide different things than parks. Food, other forms of recreation, a lifestyle, etc.

Don’t forget though, the 13 are surrounded by water and the urban containment boundary. Eventually everything within will become densified as more and more people arrive here.

If we as a society truly value the lifestyle that is our rural communities, then we have to open up development beyond the current confines. Otherwise, if this is ‘it,’ it’s only a matter of time before rural Saanich goes the way of Gordon Head.

Especially if Eby has his way.

Especially if Eby has his way.

The spelling mistake in the title bodes well. A little rushed, maybe? There are grammatical goof-ups all over the place. Could this be a fake doc, Sparky?

I got the link from David Eby’s housing page at the bottom.

Yikes. They need to polish that up a little.

…or delete it all together and forget trying to be everybody’s landlord ….and get back to fixing and providing government services.

They need to be voted out as government ASAP.

TC reporter listens to CFAX for an hour, writes article about it.

Murdock was a three-term councillor over a decade until 2018, while Haynes was elected mayor in 2018.

The debate was hosted by CFAX radio and moderated by Ryan Price.

Haynes defended his record as mayor and his leadership during the pandemic. Murdock painted the current mayor’s leadership as one that puts excessive planning and studies ahead of action.

Murdock also raised the issue of council’s costly firing — including a $600,000 payout — of former chief a­dministrative officer Paul Thorkelsson in November 2021 so council could “go in a new direction,” saying he has seen no evidence of what that direction is.

Murdock said he experienced as a councillor how “traumatic” the firing of a previous CAO was to the organization, arguing that taxpayers expect council and staff to co-operate and that “adults can work together to get the job done.”

He pointed to an eight-year process on garden suites, a housing strategy that has yet to produce housing, a nine-year development of the Shelbourne ­Valley Action Plan, as well as the ­yet-to-be-established citizens assembly on amalgamation or service integration between Victoria and Saanich, first proposed in 2018.

^ Murdock came across as a spoiled brat running for a high school student council.

He didn't talk much about how he was planning on accomplishing his platform of building affordable homes and walkable neighbourhoods. The affordable ship sailed long ago and I have no idea of how to make the area's largest municipality walkable. Dean's idea is to add more coffee shops.

Fred has bigger goals for parks, garden suites and rental suites on the same property and commercial ideas such as a film school.

I wish there was a better option than either.

The debate over North Saanich’s Official Community Plan has cast a large shadow over this weekend’s municipal election.
Three mayoral candidates and 13 council candidates are fighting it out for seven spots around the council table, and even if they don’t specifically mention the OCP in campaign material, it’s in the subtext of their campaign promises, especially those who vow to do whatever they can to keep North Saanich rural.
A review of the district’s plan over the past few years has deeply divided the community, with groups like Save North Saanich, which opposed the review, calling the process flawed due to a lack of consultation and a perceived focus on adding development and density in a largely rural community.
Other members of the community, however, have expressed concern about lack of options for aging in place, and called for more affordable housing through gentle densification.
Both sides claim the views of the other reflect a minority in the district.
https://www.timescol...lection-5947447

Two-time councillor Murray Weisenberger has decided to step into the mayoral race in part to defend the work of the previous council, carry on with completing the OCP process and provide some experience from the chair.

“I don’t think being mayor is an entry-level position,” Weisenberger told the Times Colonist. “Experience and knowledge gained over time is important and I have that experience in North Saanich.”

On the flip side is Peter Jones, who has been endorsed by Save North Saanich and said he will do whatever he can to maintain North Saanich’s rural landscape, suggesting the existing infrastructure cannot handle densification, which would forever alter the community fabric.

The third mayoral candidate is Nancy Borden, who is campaigning on bridging the gap between the sides in the district.

Both sides claim the views of the other reflect a minority in the district.

Why not a referendum then on the OCP or level of development?

Can we at least agree the word “rural” for a community like North Saanich is antiquated in the year 2022?

North Saanich is a low density suburb, home to an international airport and one of the largest ferry terminals on the continent. If it’s rural, then Victoria is a metropolis.

I think we have to understand what the "rural" people most value.  Will they accept development along the busy roads or at intersections, or is their feeling of rural also dependant on being able to drive down a major road and just see fields?

Just for demonstration and ignoring what is here now, and if it's in the ALR: 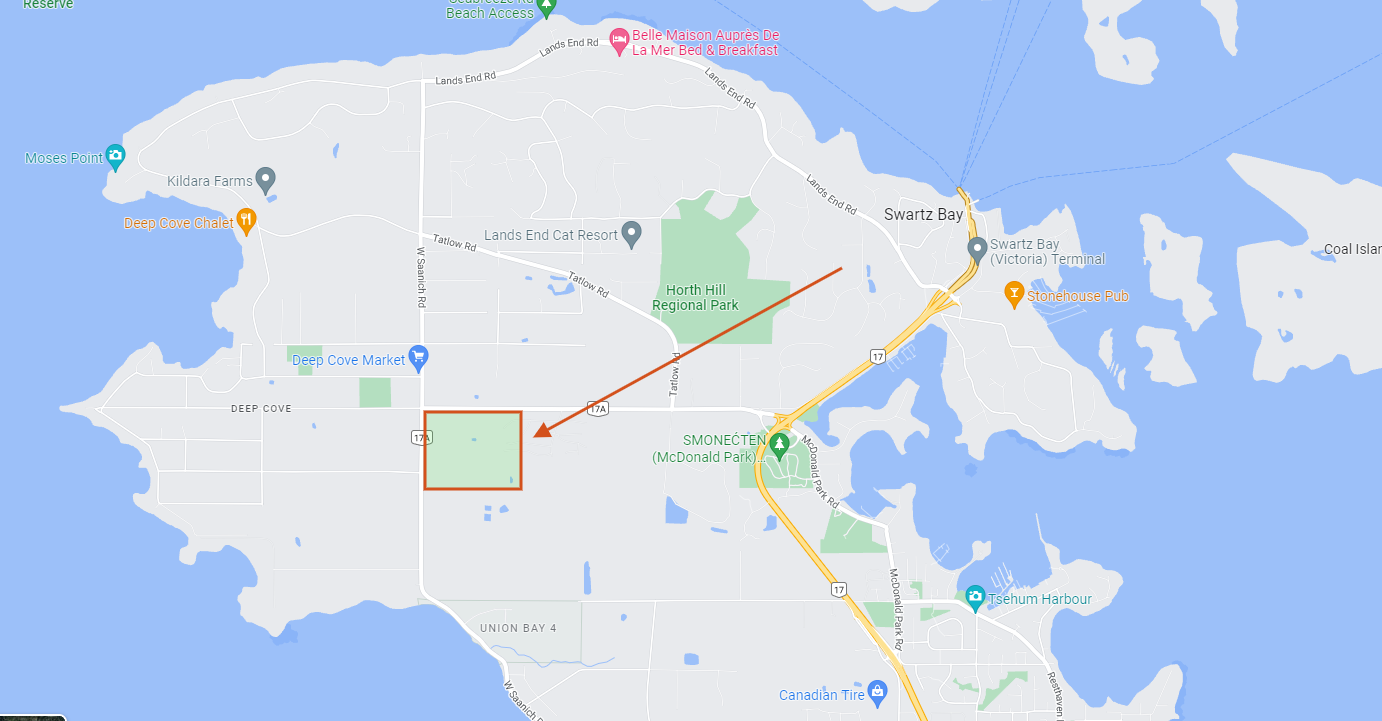 Would most residents support a 2,000 home subdivision here, with townhomes and apartments, and senior living homes, if the rest of the municipality can be kept rural?  Now seniors can age in place with more supports than their SFDs, young familes can buy here, and some workers can rent here.

I think the only fields most residents see are the airport and Parkland school, to be honest. It’s just a suburb, with suburban streets, and lots of driveways.