The state has proven it will impose restrictions on people's rights and freedom for the "greater good". No more than one child per couple.

But yes, 52 weeks is combined between mom and dad. 17 weeks for mom and the remaining 35 is split however they want. But EI will only pay out for 52 weeks total.

Note this is new, but there is now an option for longer leave now, but at same total payout from EI (e.g. you can take 86 weeks total combined leave at same total pay from EI amount). https://www.canada.c...ntal-leave.html

No Injuries After GVERT, Patrol Officers Rescue Person In Crisis From Rooftop

Victoria, BC – A person in crisis was rescued from a rooftop by VicPD officers last night.

Just before 6:45 p.m., Patrol officers were called to a hotel in the 100-block of Douglas Street for a report that a person in crisis, armed with a baseball bat, had run to the top of the building and was on the roof. When they arrived, they located a person in crisis on the roof of the hotel.

Officers with the Greater Victoria Emergency Response Team (GVERT), including Crisis Negotiators, were deployed alongside Patrol officers and Victoria Fire Department firefighters to help rescue the person. At several times during the incident the person in crisis positioned themselves at the rooftop ledge.

After several hours of negotiation, the person in crisis surrendered to officers and a Victoria Fire Department ladder truck was utilized to assist in bringing them down from the rooftop safely. They were apprehended under the Mental Health Act and transported to hospital.

No one was physically injured during the call.

Which hotel is in the 100 block of Douglas Street?

Does place operate as a hotel? 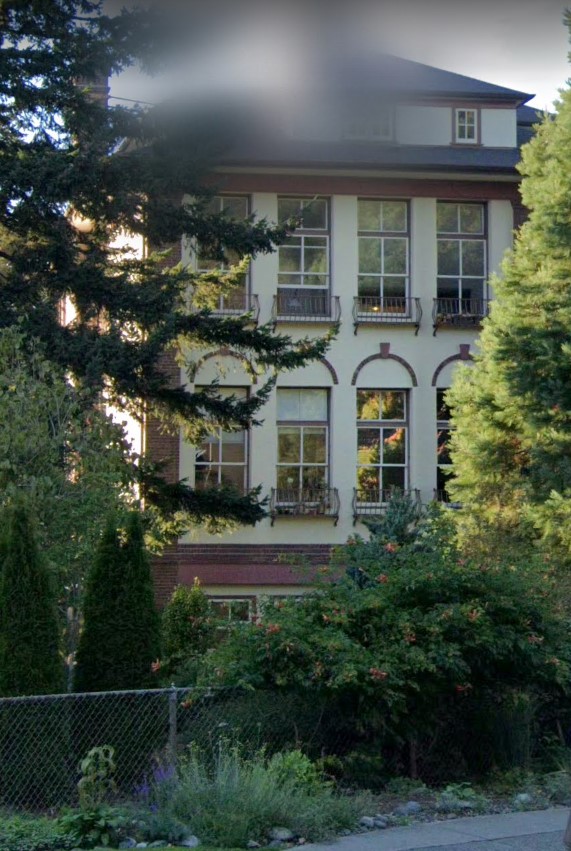 Ya. Odd. Might be a digit missing in the piece.

We shared an amazing Canada Day with the community & we were humbled to see the support for #GVERT & officers across the region. It made a difference today! Thank you! #yyj
@canadadayvic @CityOfVictoria 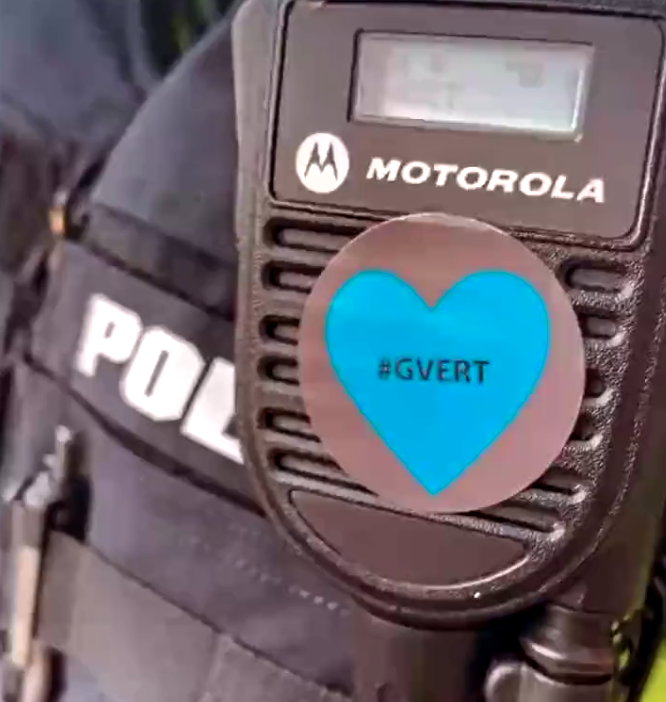 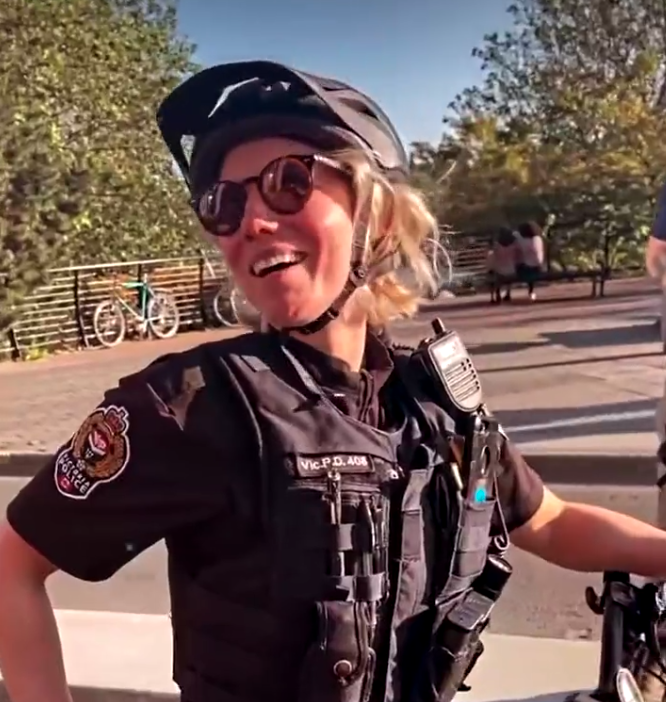 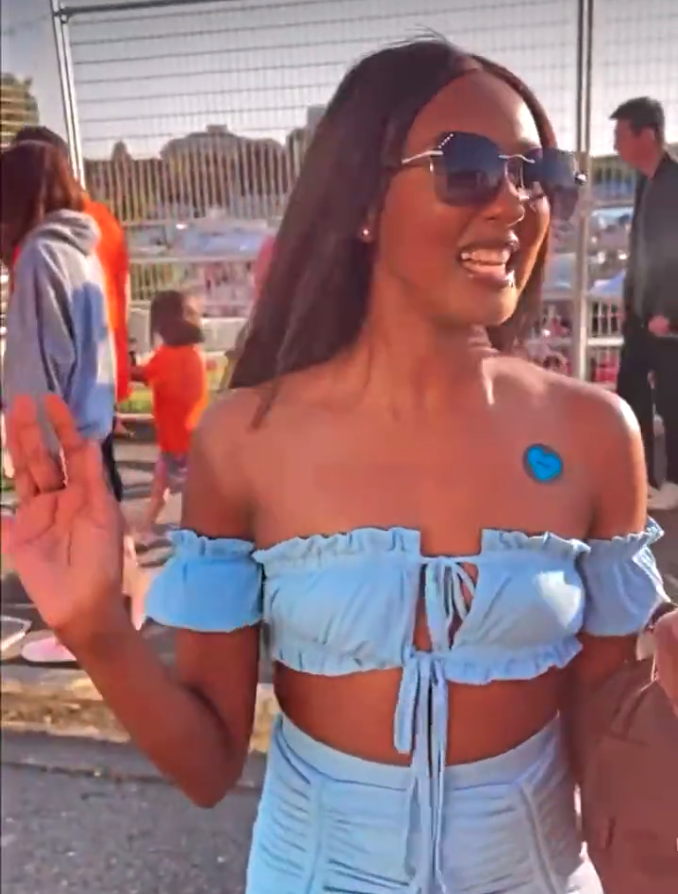 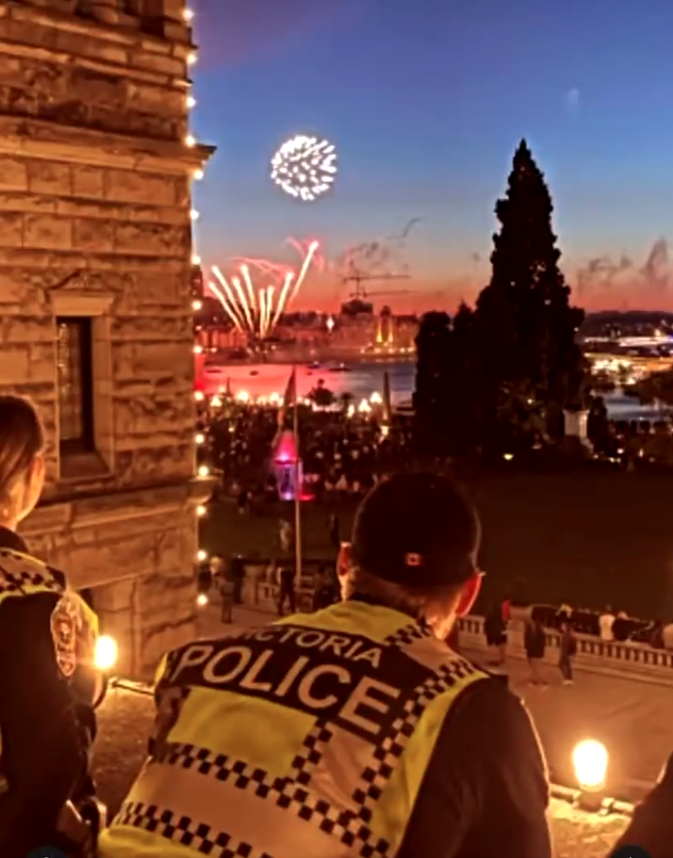 Consider the risks: Why would anyone want to be a cop?

Police unit responds to another call hours after six of their members were gunned down
by Jack Knox, Times-Colonist - July 2, 2022 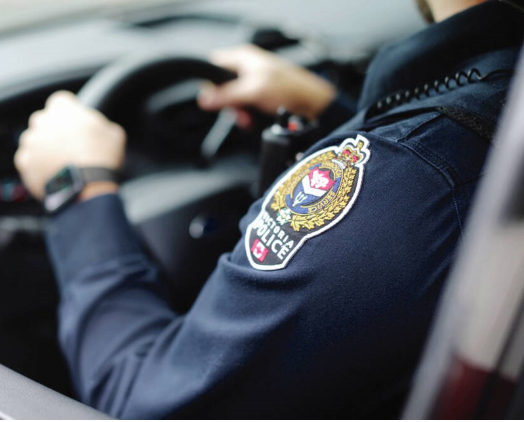 Just seven hours after six of their number were gunned down, the remaining members of the Greater Victoria Emergency Response Team had to respond to another call.

This time the crisis involved a distraught person, clutching a baseball bat, on the roof of a downtown hotel.

This time it ended peacefully.

Still, imagine being one of those cops — drained, reeling, still trying to catch your breath — and your phone goes off, ­telling you it’s time to gear up and do it again.

People keep saying that they never thought this could happen in a peaceful place like Saanich, but that’s also what people said when Stephen Reid, the bank- robber-turned-author-turned-bank-robber, opened fire on police during a wild car chase through James Bay after a Cook Street Village hold-up in 1999. That’s what they said when two officers responding to a ­shooting were among the four people killed by a man in Fredericton in 2018 and when a man hoping to kindle a revolution against the Canadian government shot five RCMP officers, three fatally, in Moncton, N.B., in 2014.

It’s what they said when four Mounties were murdered on a farm/chop shop/grow op near Mayerthorpe, Alta., in 2005 and when three more were shot to death by a deranged man with an army surplus .303 near Kamloops 60 years ago last week.

Policing has always been risky. Getting shot is rare, but getting hurt isn’t. In October, 39 of VicPD’s 249 officers were unable to attend calls for reasons that included physical and psychological injuries. Those who have left the job talk about the tremendous weight that disappears when they no longer go into every day worrying that, out of the blue, violence can explode.

They also talk about the rising volume, complexity and severity of calls, and a dispiriting lack of support. When Victoria city hall approved a Bastion Square mural that included the acronym ACAB — All Cops Are Bastards — the grim humour bouncing around the police station suggested that maybe they could just soften it to Some Cops Are Bastards, or SCAB.

Ray Bernoties just retired as Oak Bay police chief, capping a 30-year career that included a quarter century as a Mountie. Policing, he says, offers a lot: meaningful work, and excellent pay, benefits, pension, time off and camaraderie. But then…

“They say ‘ignorance is bliss’. If that’s true, policing is the exact opposite,” Bernoties says. “Not only are cops aware but they’re hyper aware and struggle to turn that off even when out with their families. We’re now more educated on the mental health issues that can be caused by decades of service, or a single incident, but our awareness comes at a time when there is a ‘piling on’ to police. Canadian police have our issues but our critics don’t limit themselves to our issues. If an American police video goes viral, we can feel the public see us differently.”

He now looks at policing through another lens, that of a father. “It’s a noble profession that will take a toll on a person. I have two sons and, at this stage, despite knowing lots of great people who are cops, neither seems interested in policing. While I’d be proud and supportive if they ever choose policing as a career, I’m frankly relieved that it’s not on their radar.”
More: https://www.timescol...e-a-cop-5540873

Based on media articles, 911 operators are the softest workers we have in this province.

B.C. 911 operators forced to work more overtime than ever before due to 'critical' labour shortage

On Monday, E-Comm notified more than 150 other full-time dispatchers that the agency “may have to resort” to forcing extra shifts upon some workers in order to meet minimum staffing requirements over the Canada Day long weekend.
https://www.timescol...hortage-5541094
Stop hiring so many women.  It's very badly out of sync compared to the population.
Among 911 Emergency Dispatchers, 73.2% of them are women compared to 26.8% which are men.
https://www.zippia.c...s/demographics/

Consider the risks: Why would anyone want to be a cop?
Policing has always been risky. Getting shot is rare, but getting hurt isn’t. In October, 39 of VicPD’s 249 officers were unable to attend c
Ray Bernoties just retired as Oak Bay police chief, capping a 30-year career that included a quarter century as a Mountie. Policing, he says, offers a lot: meaningful work, and excellent pay, benefits, pension, time off and camaraderie. But then…

1.)As Chief Bernoties says: money, pensions, and time off.

I think it usually has pretty generous early retirement options too. If you started young enough.

Joseph Wambaugh: "The physical dangers of policing (are) overstated by TV shows and movies, but police officers are constantly exposed to the worst of people and ordinary people at their worst. This produces premature cynics and makes it one of the most emotionally dangerous jobs in the world."

1.)As Chief Bernoties says: money, pensions, and time off.

3) For a certain portion, the power is a huge attraction. Getting paid to be a bully. And have instant respect, at least by some people. Just for wearing the uniform and gear.

Which hotel is in the 100 block of Douglas Street?

Does place operate as a hotel?

^ The building at 120 Douglas street is the former Beacon Hill School that was constructed in 1914 and closed in the 70's. It was then converted into strata residential units.

I am assuming that the reference that VicPD made regarding the word "hotel" is that one or more of the units could be rented as vacation stays.

Speaking of hate speech, what about that mural?

Less than 20 months ago, the same individual defended the council-funded mural in Bastion Square that included “All Cops are Bastards” as artistic expression and promoting difficult conversations.

Let’s hope that in October we will elect a mayor with an understanding of freedom of expression, hate speech and hypocrisy. 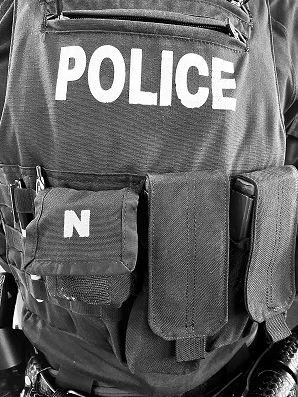 The quick actions of two West Shore RCMP frontline officers contributed to saving a man’s life with the administering of naloxone.

On July 4, 2022, just before 3:00 a.m., West Shore RCMP frontline officers responded to an abandoned 911 call near Goldstream Avenue in Langford. Frontline officers were successful in narrowing down the area the call originated from and located a 60-year-old man requesting immediate help for his unresponsive partner.

The officers found a man laying face down and unresponsive to first aid attempts. His pulse was weak and his breathing was minimal. The officers recognized the male was in medical distress related to an apparent opioid overdose. One of the officers quickly administered a dose of naloxone. After minimal improvement was observed, a second dose was given, resulting in the 53-year-old man breathing again. He was transported to the hospital by BC Emergency Health Services for further medical treatment.

Officer training and information on the administration of naloxone has been developed at the National RCMP level so officers know about the risks and symptoms from contact with opioids, how to minimize the likelihood of contact and how to administer the naloxone.

Our training, the addition of naloxone to frontline officer’s kit and the quick actions of these officers were all contributing factors to saving this man’s life, says Constable Meghan Groulx, spokesperson for the West Shore RCMP.

Speaking of hate speech, what about that mural?

Less than 20 months ago, the same individual defended the council-funded mural in Bastion Square that included “All Cops are Bastards” as artistic expression and promoting difficult conversations.

Let’s hope that in October we will elect a mayor with an understanding of freedom of expression, hate speech and hypocrisy.


The"ACAB" reference has been removed from the letter "S" in the word "Justice".

In case you have trouble reading the words in the picture, it says

"This letter has been censored by the City of Victoria influenced by the Victoria Police Department. In doing so Victoria is contributing to the silence of black and indigenous voices and experience across this land".

Still rude in my opinion. 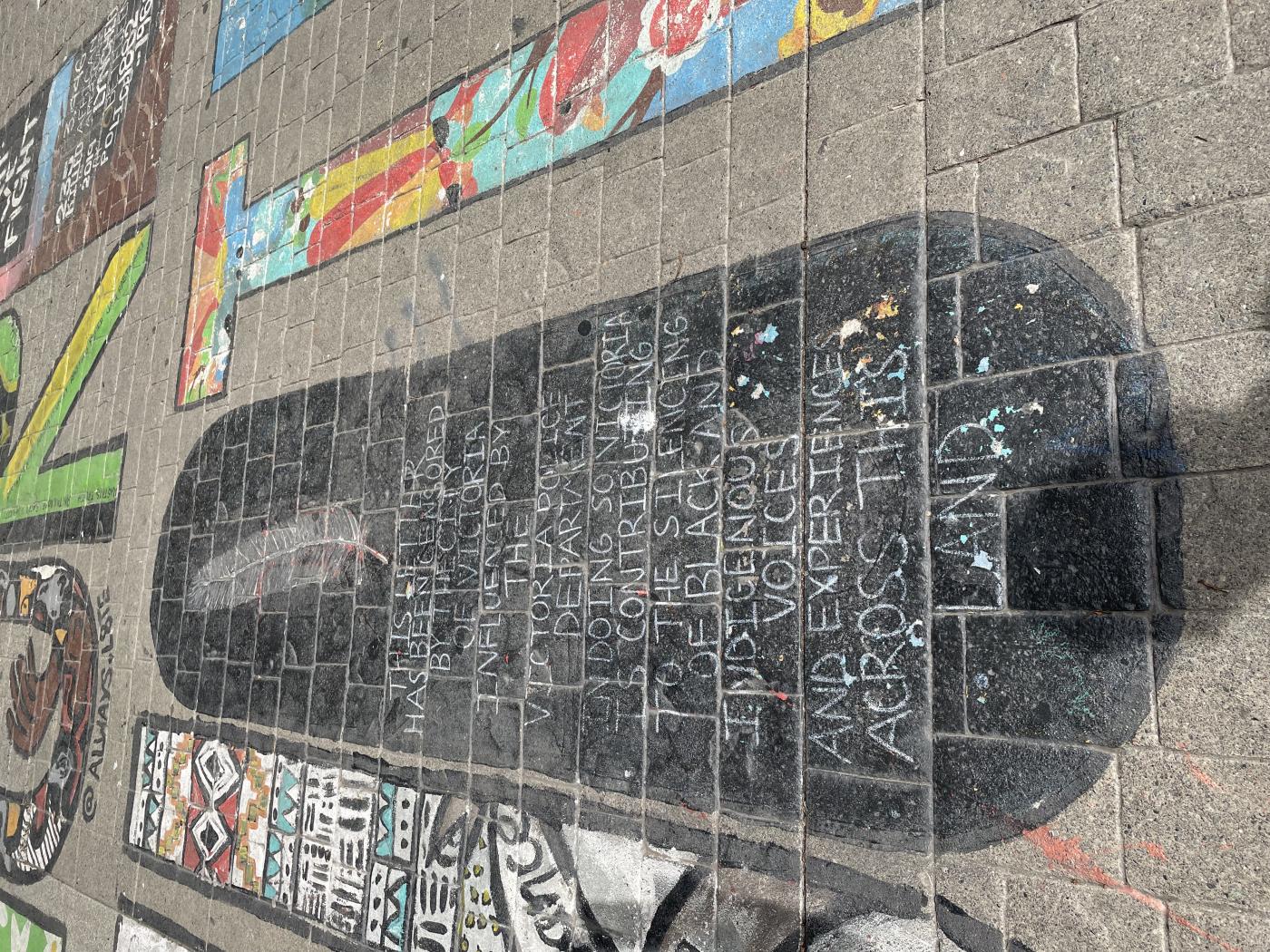 ^ Thanks Sparky. Bottom line is that the group that was paid to paint the mural painted something different then what they proposed and then council refused to hold them accountable. The group was paid anyways and allowed to seek more grant money the next year.

Just another example of how members of this council have a very specific and personal agenda they are determined to promote with the use of taxpayer dollars.