73 replies to this topic

Thanks, everybody for the fascinating research into a forgotten bit of history.

20 or so years ago that corner was a barber shop. Maybe even since that old archives photo was taken. My friends and I used to go there because we knew Ken the barber. We suspected Ken got back into hard drugs and sure enough he was fatally stabbed in a notorious drug-related attack at a Wark St. apartment in 2005.

I once made up a business card with my phone number as EVergreen 3-9126. It worked if you understood the code.

^ After Saanich Realty moved out sometime in 1942 the north corner (3588) became the Quadra Heights Barber shop, and you can see the barber stripes on the corner of the building in the archive photo from the late 40's. The barber shop survived until 1953 when it became the Quadra Fruit Market.

The following year that location evolved into the Quadra Corner store and in 1957 is when Phyll's Confectionery became the store written about in my first and second post.

I will look for the history of when again (3588) turned into a barber shop. I will also do another piece on the evolution of the confectioneries and grocery stores at this location.

Don't change that dial, there's more after this break.

The contractor that has preserved the sign (instead of stuccoing over it) has been in touch with everybody he can think of, BC Museum, Auction houses, etc.

Does anyone have any ideas? The only thought we discussed was to see if there were any decendants that might like to preserve this treasure. ??

Have you finished the siding on your chicken processing facility yet Sparky? You could stick it up there

^ Good point. Chicken on the run with grandpa's repaired shoes. I like the ring of that.

There is no basement under the north end of this building just a tall crawl space. I once removed two large metal screens from down there that had been used for taxidermy or possibly tanning leather. There was also salt in there.

Heritage Acres Central Saanich may want it.Otherwise it sounds like a cool piece for den.

A two-foot stone wall has been built on the corner of the property. I predict this will ensure that any out of control trucks that may hit the building will now be launched into the air and completely through the window.

^ I was thinking the same thing last week when I drove by.

A two-foot stone wall has been built on the corner of the property.

The sidewalk will be between that wall and the building, and the road will be wider and have bike lanes at that intersection.

Actually Tatersall (west of Quadra) is having a MAJOR face lift. I grew up on that street.....I had better go get some "construction" shots.

...Tatersall (west of Quadra) is having a MAJOR face lift...


Long overdue. I hope it's more than just a some big-ass sidewalks and traffic calming. Tattersall is the logical extension of Saanich Road east of Vernon (Pat Bay Hwy) and with some improvements could make for a decent east-west connector.

^ Funny you should bring this up as I was just discussing this street recently. Up until the early 60's Tattersall was a dead end street between Savannah and Calumet. There was a creek that ran through the properties on the dead ends that now travel through a pipe for most of the way....similar to Bowker.

^ oh and it needs a better left turn lane and advanced arrow for northbound Quadra traffic. 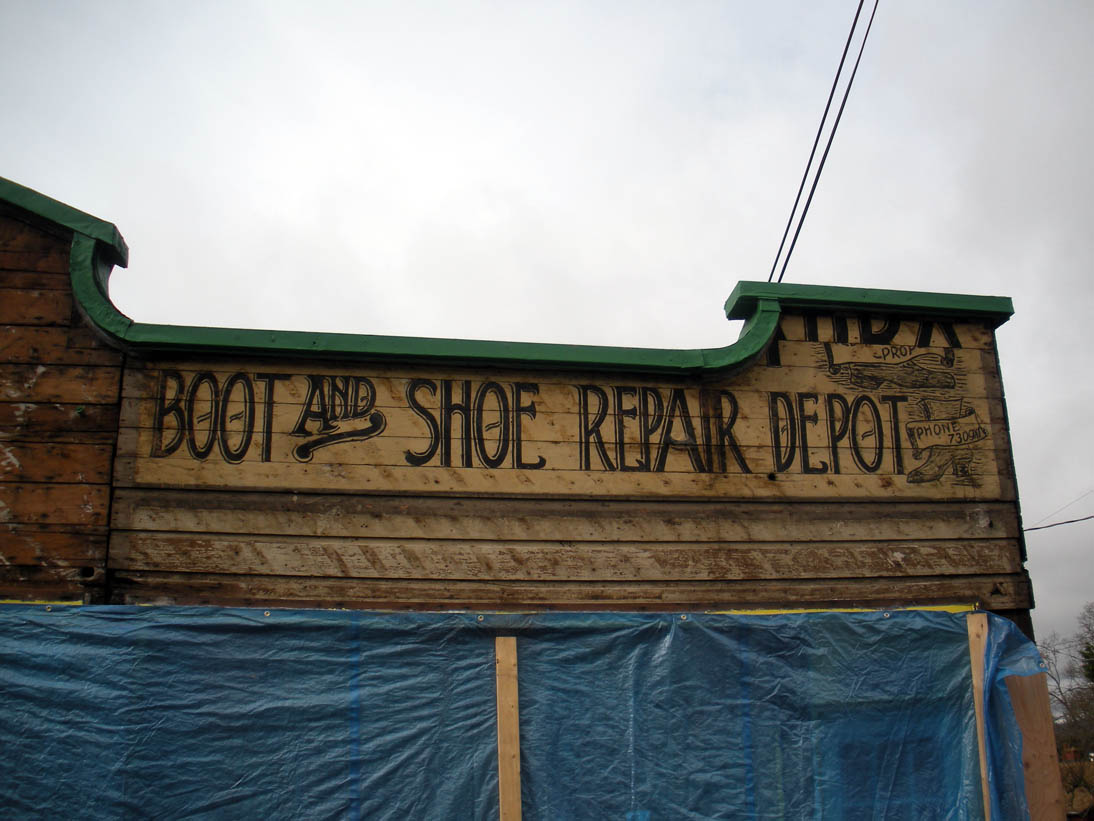 This one has been bugging me. The upper board with the letters missing is in a bit of a shadow, but if you look at the alphabet and the way the letters are shaped it narrows it down to either a HBX or an HDX, ...or what looks like an H could be an IBX or IDX. That IS an X though.

I looked up the abbreviation of what HDX means and it is a government or military abbreviation for "HALF DUPLEX". So, maybe this was part of a for sale or for rent sign attached to the Boot repair Shop.

I lightened the image a bit and there seems to be another board with more letters.

Is a half-duplex like saying half a pair of socks?

I doubt a little-known abbreviation would be given such prominent placement. I think that's the top of an "A" rather than an "X". "-LAURA"?

EDIT: Your close-up shows the leg of the "R" and a portion of the distinctive downward-curved cross-piece of the "A".

This is better than the NY Times crossword puzzle.

It's the last three letters of QUADRA..!