In essence Charter is a major player in unified communications although the Voice piece is virtually non-existent today so about 99% of their expertise lies in data comms, aka network routing/switching/monitoring. They do it all from design, builds, maintenance and support. A major Canadian partner with Cisco, Juniper and Avaya among many other vendors. Very low key, below the horizon profile and by design.

This is the outfit that bought out Boardwalk Communications in 2016; they have about 100 staff from Victoria to Toronto with major hubs in Vancouver and Calgary. Not sure about this HQ though as that picture was first posted on the site over a year ago. Haven't been out there lately so no idea if there has been any progress on this building. 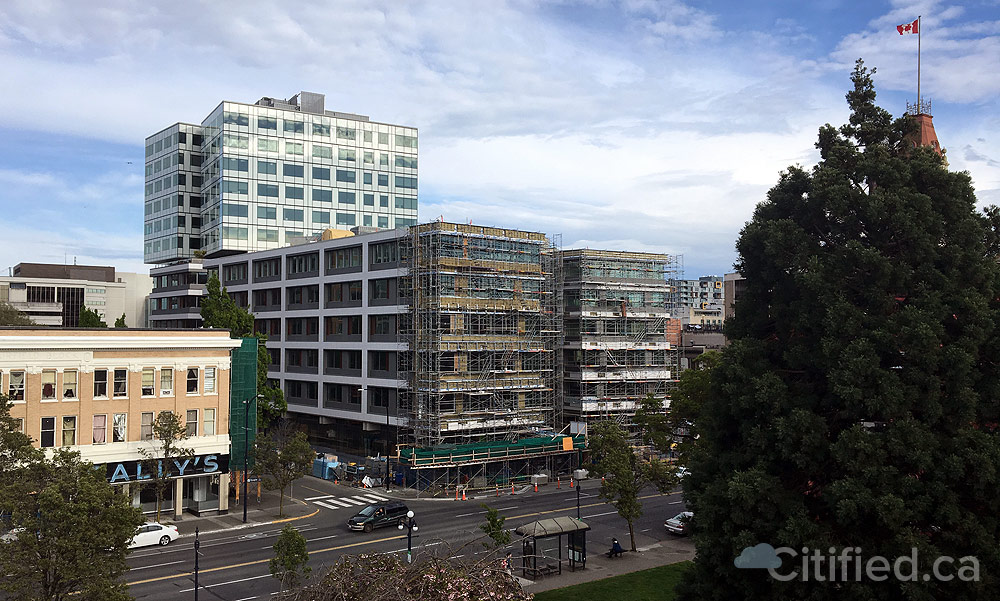 BCI's new headquarters, a 13-storey office tower along the 700-block of Pandora Avenue, is currently staffed by over 500 workers. That number is expected to rise to 600 over the short term with many more more situating at BCI's Victoria headquarters over the medium term. 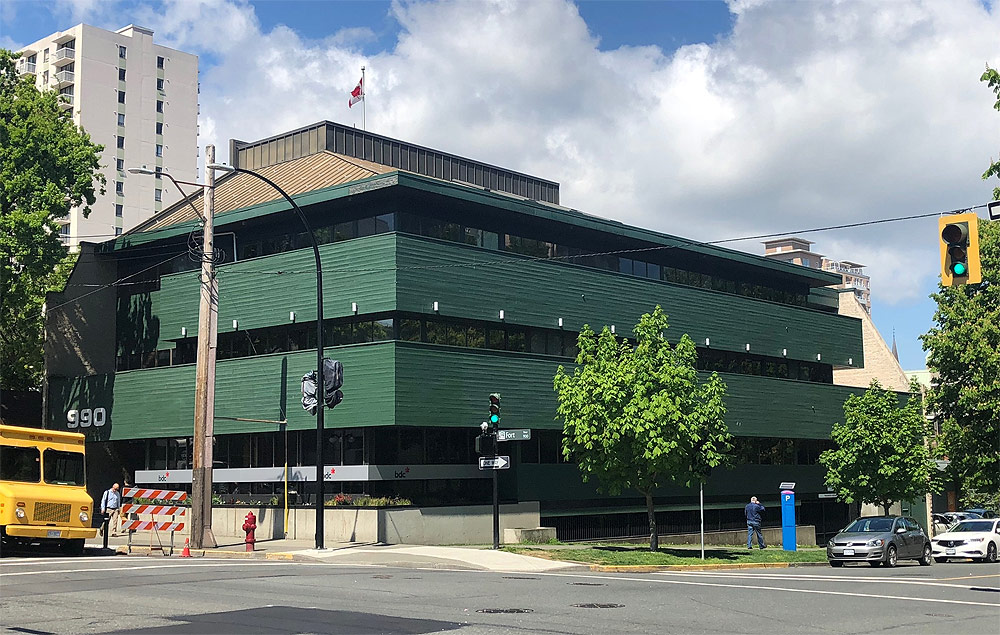 990 Fort Street has been sold to Devon Properties, the Capital's largest rental property management firm. Devon Properties will be vacating its Oak Bay offices of 26 years and transitioning its operation to downtown Victoria in early 2019.


this author has a reading comprehension problem.

There must be zero oversight of the content being published.

I supplied the data for that report. I can assure you there has not occurred what the author of that piece says has occurred. 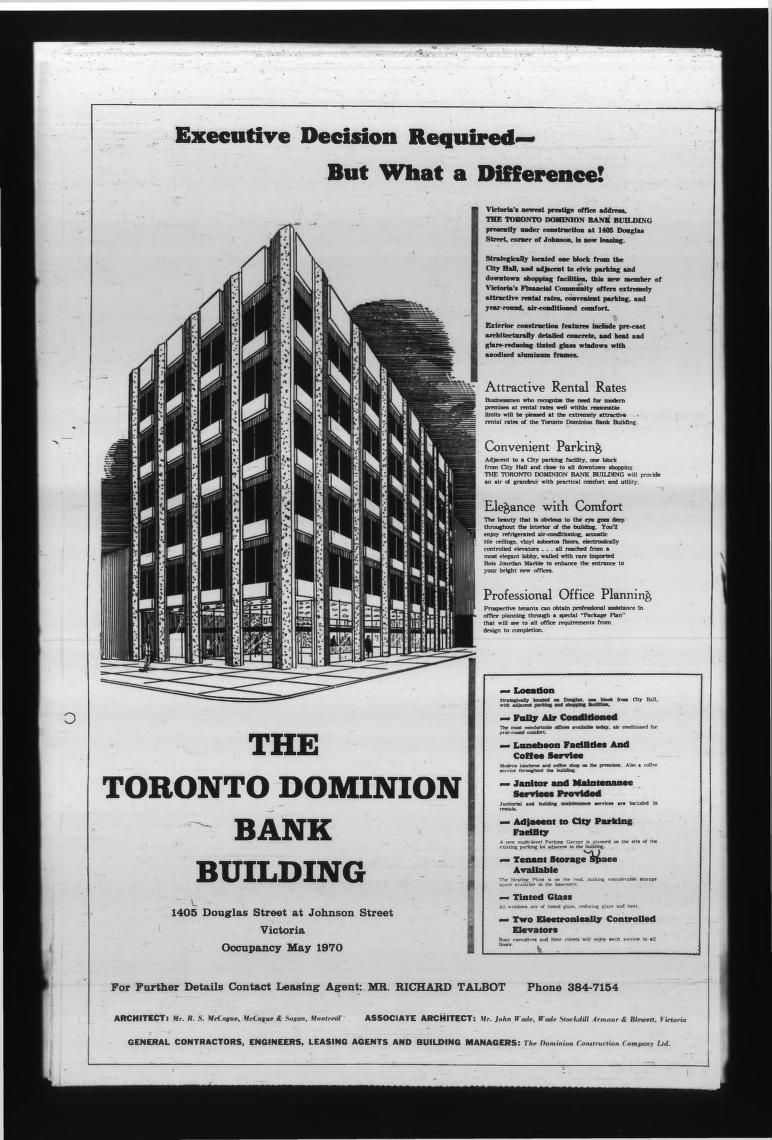 Interesting use of an isometric illustration to make a building that is barely half the height of its predecessor seem taller.

The new building does have a nice interior.

The building would be so much nicer if it had clear windows and a lobby or restaurant you could see into like in the drawing. As it is right now it's a dreadful black hole.

It is not really correct that employees will "move there". They choose to work there sometimes when they want to but can still also continue to work downtown as well. It is plug-in flex space not somewhere that you work your full week.

I can already foresee Victoria mayoral candidates’ talking points in 2030:

“I plan to bring back government office workers to the downtown core!”

“My plan will reinvigorate the downtown office market!”

“We need solutions for downtown Victoria’s office market, and my platform has what it takes to make a difference!”

“We all know the office market is struggling, but it doesn’t have to be!”

court-involved sale of a downtown building with subway etc. in it at fort and blanshard.  $6.3M.

High profile office and retail building on the corner of Fort and Blanshard. CA required for further information. All offers should be sent to the listing agents by 5:00pm 20th November 2019 and must be subject to Court approval. Upon review and an acceptance by the Seller, an application will be made to the Court for approval.

A little history on the development of the Richard Blanshard Building aka The MInistry of Health building.

Long before the Richard Blanshard Building existed, this site was home to the First Presbyterian Congregation church, established in 1862. Pictured below is a view of Blanshard Street with the church circled in red.

The original Pandora building was built in 1955 to house the BC Electric Company and was the first large-scale Modernist building in Victoria. It was designed by Thompson, Berwick, Pratt & Partners. At the time, it was considered an impressive example of avant-garde design. The tall, narrow, and linear building is built of concrete with curtain wall cladding. The curtain wall construction creates an open and ethereal impression, with its narrow columns and large window fronts on both sides. It is the reinforced concrete frame which supports the full weight of the structure. The building retains its unique aluminum sunshade louvres to screen and diffuse direct sunlight.

In 1974, a 200,000-square-foot addition was designed by Siddall Dennis Warner Architects and built behind the original Pandora Street building. After that, both buildings became home to the Ministry of Health. The Neo-Brutalist design of the new wing is markedly different to the original building (although this style was generally influenced by Modernism), and is remarkable for the contrast between the stepped, vertical sections immediately behind the Pandora wing, and the strong horizontal "layer-cake" lines of the main sections facing Blanshard and Amelia Streets. Instead of the airy, wide expanse of windows found on the Pandora wing, the addition features flat concrete pillars which extend outwards in front of the windows on the Blanshard, Cormorant, and Amelia Street sides.

It is clear that the architecture firm tasked with building the addition to the old BC Electric Company building decided to put their own stamp on the building and had no interest in creating a structure that would harmonize with the original building. But, although the Neo-Brutalist addition appears to be at odds with the airy lines of the Modernist building, there are a few small harmonies to be found in the sometimes unforgiving, and unadorned, neo-Brutalist exterior. The set backs and generous planting areas at the corner of Pandora and Blanshard are echoed by equally generous setbacks at the corner of Cormorant and Blanshard, and on the Amelia Street side, the stepped sections of the concrete structure are inset with large window fronts in an echo of the light, airy interiors of the original Modernist building. 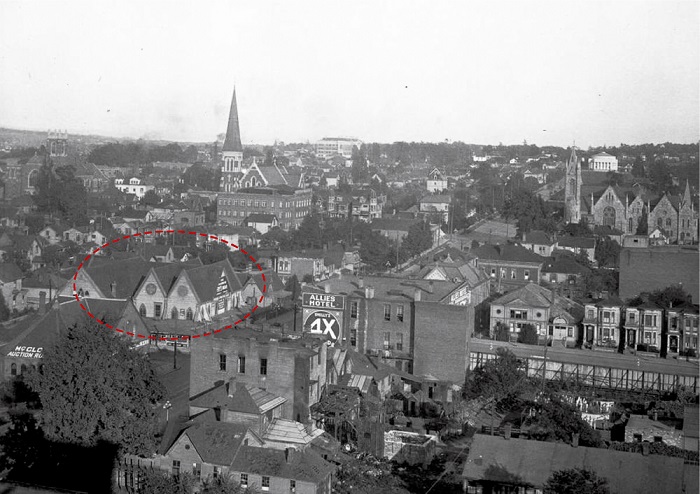 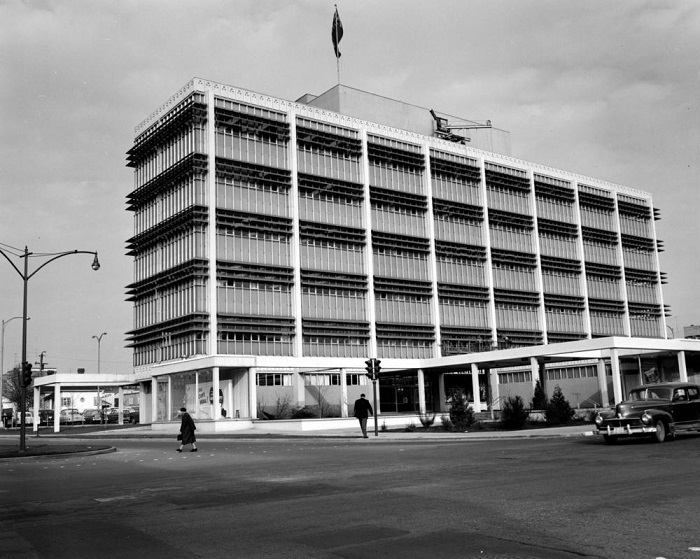 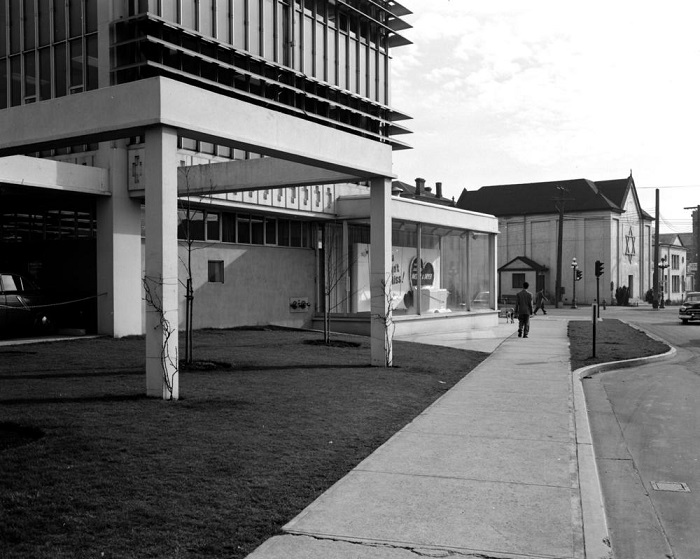 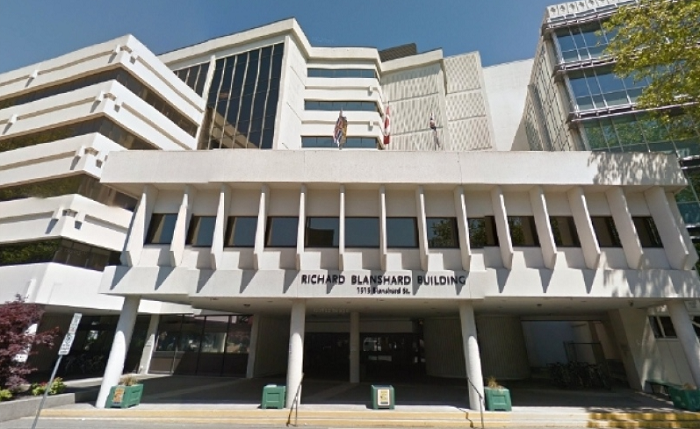 Check out the old houses on that block beside the 1950s wing under construction.

There is a new co-working space on Store street. Interesting design.