Greater Victoria lost the equivalent of 12 Beacon Hill Parks in tree cover over six years, according to a study by the non-profit society Habitat Acquisition Trust.

“We all have a sense we’re losing trees but the sheer mass of tree cover lost was surprising,” said executive director Adam Taylor.

The amount of tree cover loss and the rate at which it happens in developing regions is cause for alarm, Taylor said.

“How are these municipalities going to manage stormwater when they’re losing trees at this rate?” Taylor asked.

“Trees literally suck up water, prevent it from cascading in those big floods with costly messes. They retain water during the dry periods. They also absorb air pollution and clean the air. As we lose trees, taxpayers will pay for that.”

The study compared aerial photos of the capital region taken in 2005 and 2011. Using Geographic Information Systems software, tree loss and development in the 13 municipalities were mapped, charted and analyzed. The report was funded in part by the Capital Regional District and the Real Estate Foundation of B.C.

The study showed Saanich lost the most treed land over the six-year period: 378 hectares, equivalent to 146 of the University of Victoria’s Finnerty Gardens.

“The cause wasn’t anything specific — which was interesting and a bit shocking,” Taylor said.

The disappearance of trees in Saanich appears to be the result of urbanization and a multitude of small, changing land-use projects, rather than major building developments.

Langford lost the second-most land — 118 hectares — with the loss driven by development in areas such as Bear Mountain and Westhills, Taylor said.
Victoria lost the greatest percentage of treed land. While 42 hectares might not seem like a lot, it is 8.8 per cent of the city’s little remaining tree cover, Taylor said.

With the amount of tree canopy cover in Saanich eroding, the municipality is looking to toughen up its existing tree preservation bylaw in hopes of protecting what’s left of the urban forest.

The changes include adding more species – grand fir and big leaf maple – to Saanich’s list of protected trees, and reducing the size threshold for cutting to put even more protections on seedlings and young trees on private property.

“We lost about 2.5 per cent of our canopy cover between 2005 and 2009, which equated to about 280 hectares of canopy cover,” said Cory Manton, Saanich’s manager of urban forestry, horticulture and natural areas.

“If this trend continued forever, you’re going to find an imbalance at some point where the trees are no longer going to provide the benefits that they do for us today.”

Besides the things that trees do for the environment, etc they're also an important part of the landscape here. Where would we be without our arbutuses & garry oaks? Where would we be without our arbutuses & garry oaks?

I would be spending a lot less time cleaning gutters, and raking.

Not a fan of Garry Oaks... They already (its only late July!) look like they are dying, and even when in full cover, barely give much coverage compared to other trees. And we are SURROUNDED by the damned things.

Arbutus are cool to look at but are sooo dirty, glad to not have any as immediate neighbours.

Maples, pines, cedars... They are all good in my books


Let the forest burn so that it can regenerate itself naturally

Big brother won't let that happen though. They won't light it up at Dallas rd and let it brun up and over the hill and into the meadows like what should happen

Well, people are just as much part of nature as anything else, so "natural ecosystem" is kind of redundant. The local "ecosystem" now includes a whole lot of people it didn't used to. Many of them have the peculiar illusion that they are somehow separate from nature and the world that surrounds them and act accordingly, which leads to odd and sometimes distressing modifications in our local "ecosystem".

I live on a hilltop that used to be second growth forest (in which I and some rock climber friends used to play). Now that the houses, lots, and paved parking are here (and have been for around 30 years) we no longer have a forest. We have surviving trees. Not being part of the forest as they used to be, they are slowly disappearing as they become unsafe and have to be removed.

My back yard used to have four nice tall firs. It now has two as the co-op decided they didn't want them to get blown down and wreck my unit. They get inspected yearly, but the end result is not in doubt if the hill remains as populated as it is. Eventually there will be none left.

Not a fan of Garry Oaks... They already (its only late July!) look like they are dying, and even when in full cover, barely give much coverage compared to other trees. And we are SURROUNDED by the damned things.

Arbutus are cool to look at but are sooo dirty, glad to not have any as immediate neighbours.

Maples, pines, cedars... They are all good in my books

Amen. They are just awful, awful trees. Their leaves and sap are so caustic and $hitty. I had three big ones in my yard at my old place in Gordon Head and they just ate through my roof. Much like raccoons, they add relatively very little to the local ecosystem. Let's nuke 'em, I say!

I wonder how much of the tree "loss" is a result of development cycles.

For example, land was cleared in the post-war period to make way for houses. The new subdivisions were landscaped with tree seedlings, which have grown and filled in over the years.

I expect a fair number of those trees are now needing replacement, for one reason or another. The replacement trees being small, result in a temporary loss of tree coverage.

We also lose trees every winter (well, most winters, anyhow) when storms roll in. A mature Japanese cherry blossom came down two winters ago just a few houses away from my place and it was replaced by a tiny tree that could barely hold itself up. Over the years multiple trees in the neighbourhood have come down as a result of heavy winds.

If we want trees around in the future it's critical that we plant new trees every year. We don't live in a "wild" forest that is capable of renewing itself. As has been pointed out, every year trees die from storms, disease, old age and being cut down for other reasons and we need to replace those that are lost.

There's a Black Locust somewhere doing its damndest to singlehandedly fix this problem. I can't find the parent tree, but incredibly persistent shoots are materializing all over my yard and garden. I am astonished at how fast the things grow.

If we want trees around in the future it's critical that we plant new trees every year. We don't live in a "wild" forest that is capable of renewing itself. As has been pointed out, every year trees die from storms, disease, old age and being cut down for other reasons and we need to replace those that are lost.

Has anyone else noticed that the most common trees planted around our region as of late are ...palm trees? I love the darned things myself but I've noticed that given any opportunity a municipality will plant a palm! Yes, this particular specie of palm is hardy and can withstand a bit of a winter freeze, but what will happen when we get a 100 year winter? We'll lose hundreds of trees around the region in a matter of days!

They're creeping up on us!

Check it: Douglas @ Tolmie Goldstream Avenue Saanich City Hall and there are many more examples throughout the region. They're also popping en masse in private yards.

http://goo.gl/maps/GiPP1
Did someone say palm trees in victoria?
There's a few across the street too. Someone got into a palm-tree war on this street and someone went too far.

Here is another way to guarantee that a tree will be cut down long before it naturally dies.
In this case at the corner of Fort and Douglas at the Royal bank some one who is obviously not a brilliant horticuluralist plants a Monkey Tree under the overhang of the bank.

Monkey trees can grow heights of over 110 ft tall and can live over 100 years.

This one here because of where it was planted will have maybe 10 years of life ahead of it before it needs to be cut once the top of it is cut thats the beginning of the end for the tree.

Its just as bad as when I see people plant sequoia trees right next to thier house .

Apparently the two trees are/were the tallest in the City of Victoria. 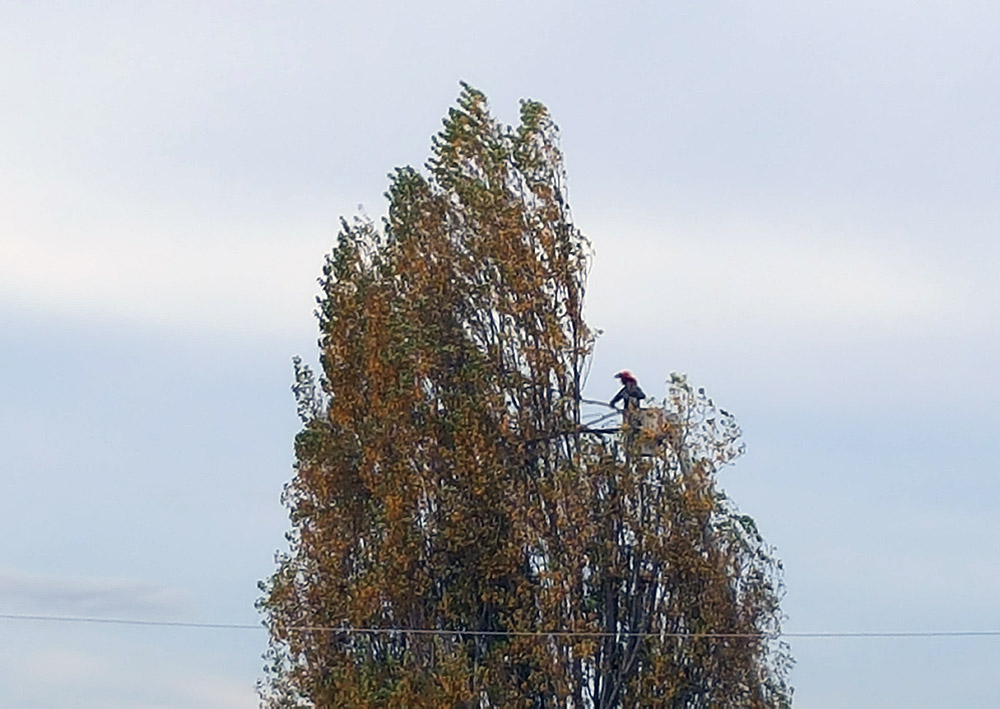 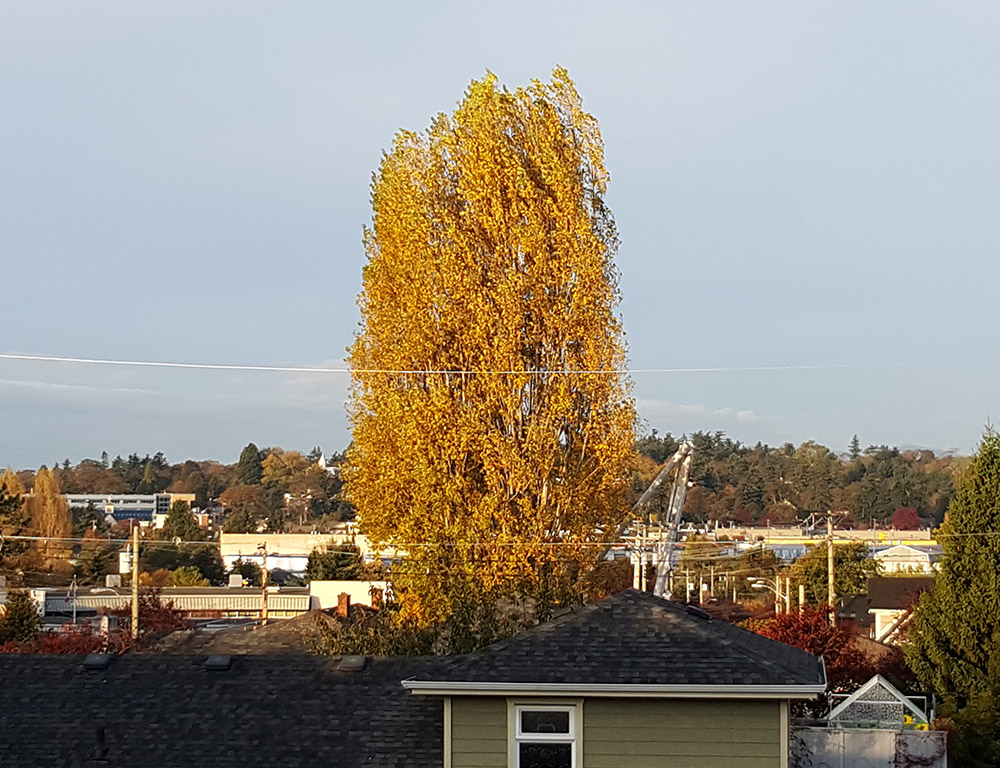 Are they really so tall? They don't look it. How tall are we talking?

This one by Beacon Hill Park seems to be the same height as the old 13-story apartment block right beside it.

Back away a little and it's the height of a 9 or 10-storey residential building. From what I've been told those Vic West trees reached about 150'. Considering the guy with the saw is about 6' tall, 25x him stacked head to toe looks about right.

Is anyone as concerned as I am about some of Victoria's taller trees blocking the view of the Sooke Hills?

Have look at the Giant Redwoods in Irving Park at Menzies and Michigan...now those are BIG.