Is this a floating bridge? There still needs to be clearance for the ships at the Institute of Ocean Sciences

Plenty of clearance at the North Saanich end of the bridge until it settles on the sea.

Why would we need to evacuate the region? In the history of the modern first world no city of our size has ever had to evacuate. Except in times of world war.

If we ever have to evacuate it's because of nuclear war, and we will not be returning for a few decades.

Are you sure about that?

900,000 people evacuated southern California due to forest forest fires in 2007

2.5-million people were evacuated from FL, GA and SC as Hurricane Matthew approached

Before you hit the post button, ask yourself whether it adds to the conversation, or whether it's created through a sudden impulse just to post something amusing to yourself.

Major regional earthquake centred somewhere in the CRD, resulting in no power, no water, completely laid to waste infrastructure - with a projected timeline for a fix of a minimum of two to four years ... and the Malahat is impassible, destroyed in the earthquake.

75+% of the CRD has to leave the area to continue to live their lives ... but nobody can get out on any roadway, leaving the entire CRD having to evacuate on the B.C. Ferry system ... IF the ferry terminals aren't totally destroyed in the earthquake.

If the ferry system AND the Malahat were to be completely incapacitated ... to say we of the CRD are "screwed" would be an understatement.

Regardless, as noted above, having a city of near 400,000 dependant on a single two lane bottleneck that leads into a narrow and twisting mountain pass is in and of itself (minus the earthquake) ridiculous.
Even if folks were to be able to remain in Victoria after a disaster, if anything were to simultaneously happen to the ferry terminals and the Malahat ... we CRD types would most definitely be wishing somebody had the foresight to build a bridge!


This disaster is one in 500 years. No point planning for it. Also, we do not need to all leave at once. You can go 3 weeks or more without food.

Are you sure about that?


We do not get hurricanes.

We do not have enough urban forest to ever have a wildfire issue here.

We have no nuclear plants.

Plenty of clearance at the North Saanich end of the bridge until it settles on the sea.

Here is the end of Wain Road, so the incline would need to begin further to the east at right side of photo, and run a distance offshore to deeper water as a suspension bridge. Yes/No? 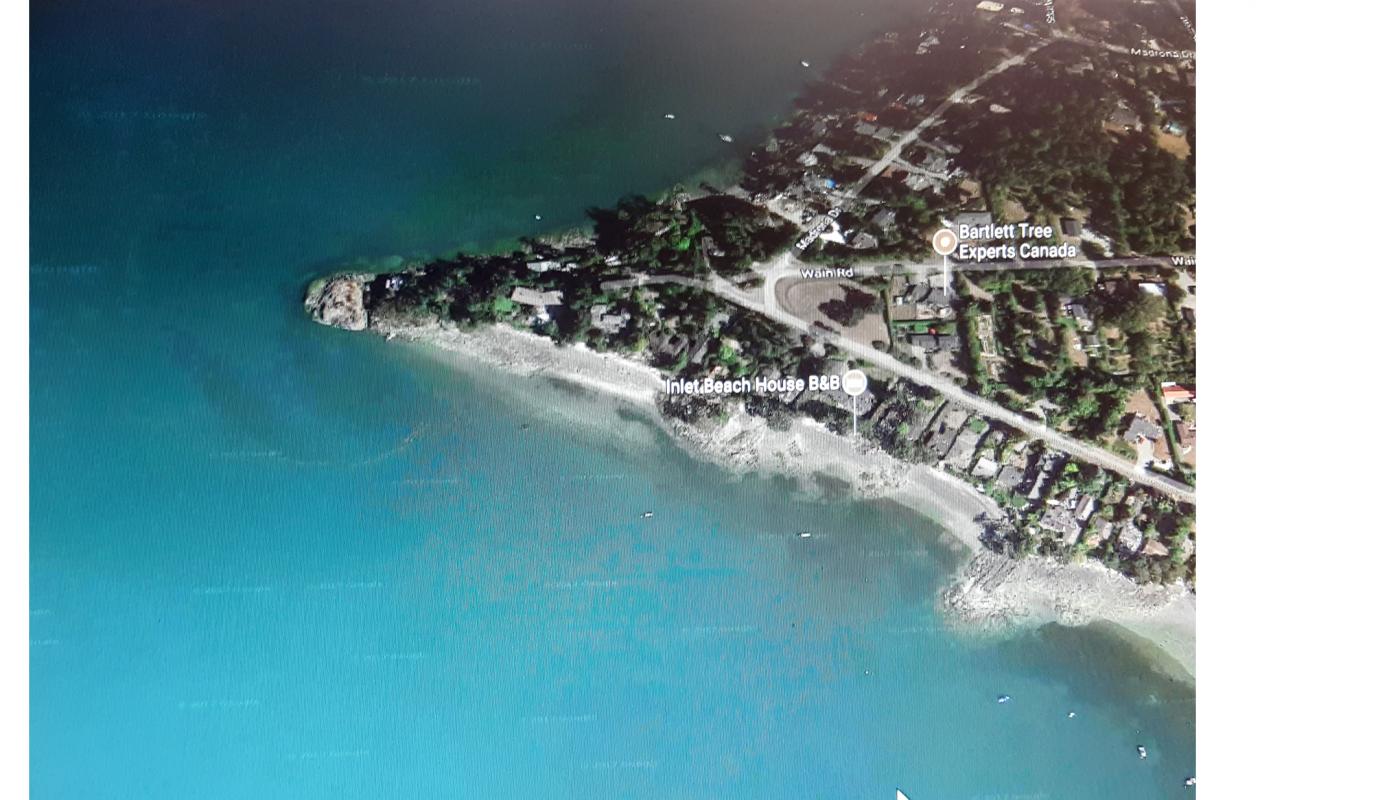 We do not get hurricanes....

We got those typhoons but they were something far short of spectacular.

If we get the earthquake that levels us, Seattle and Vancouver will be worse off than us, we will need to survive in place for at least two weeks. No point evacuating.

Why do people need to leave the island at all after our hypothetical mega disaster? Vancouver Island has a small population compared to its sheer size. Bountiful ocean and wilderness, lots of small farms, abundant rainfall, temperate climate, varied elevations... When we're speculating about preposterous catastrophes I'd say Vancouver Island would be near the top of the list re: the most comfortable places in which to ride out the world's transition to the Mad Max era.

Apply your favourite mega disaster scenario to any other part of Canada and right off the bat you've got the unsurvivable winter to contend with.

Deer and rabbits to eat.

...Deer and rabbits to eat.

You think a major disaster is going to stop the deer/bunny-huggers from protesting the killing of these cute critters?

A massive earthquake or typhoon or whatever would likely take out this fancy new bridge anyways.

Apply your favourite mega disaster scenario to any other part of Canada and right off the bat you've got the unsurvivable winter to contend with.

And soon it will be a requirement to have snow tires mounted on all cars year around indefinitely, especially when crossing bridges that have slippery when frosty warnings, or when travelling overseas to Vancouver.

Bats are endangered too.

I lived on a gulf island (not Saltspring). Trust me, they would be opposed. If there were tolls then people would simultaneously complain about the high tolls AND all the evils a bridge would bring. And to be fair to them, a bridge would fundamentally change the character of the island.

I doubt a bridge to SSI will ever be seriously proposed, but if one were to go ahead you'd have to first arrest 50$ of the island blockading the project.

Remember - on Saltspring expanding a coffee roaster was unacceptable to the locals. With that attitude imaging the opposition to a bridge that actually would be a big deal,

I am sure you are kidding, but if you did that, you'd still have to supply ferry service to SSI.

CFAX has picked up the story right off of this thread.

With major construction delays on the Malahat and a consensus that the lone mountain corridor is over worked, is it time to re-visit a floating bridge from the Victoria airport to Mill Bay?

If you look at a map you'll see my bridge lands just east of Shawnigan Lake. It's a lot further north than most would imagine. Travel time from Shawnigan to the bridge in Cowichan would be about 10 minutes with a proper connection. Maybe even less. Compare that to 40 minutes to travel to View Royal where you suddenly hit traffic and gridlock, if not sooner.

And with a beefed up 17 the travel time to downtown would be sognifacantly faster than a comparable Malahat route.

A bridge across Saanich Inlet makes the most sense as an alternate to the Malahat and therefore will probably never happen.

Did I already say this? A bridge across the inlet would effectively merge communities in the other regional district with Greater Victoria. Methinks the political implications are more than enough to prevent it from happening for decades to come. Statistics Canada would eventually be obliged to adjust its definition of Victoria CMA, too.

...Methinks the political implications are more than enough to prevent it from happening for decades to come...

Sad, but true. With the level of cooperation in the CRD sketchy at best, it's hard to imagine the roadblocks that would come up in working with another regional district