The More Victoria Changes, the More It Stays the Same... 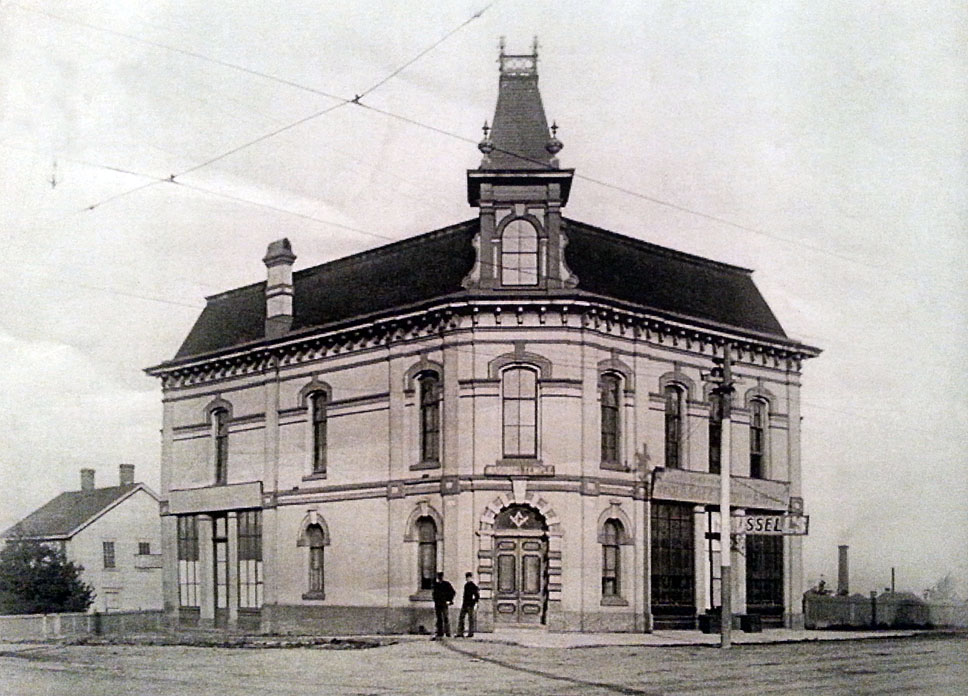 more about bastion square. I'll try to go in chronological order. It would be a lot handier to have a plan or layout to see that all this time it didn't change a whole lot from that time. anyway from the older pic above originally the square was along the northern side of the old fort.

then by 1885 the first law courts building gets built on the same site, view @ langley:

by 1937 it was paved there wasn't a dropoff at wharf st. the view from govt st:

facing the old hbc warehouse where the wharfside is now...

& looking the other way about 10yrs later:

in the 1960s it gets pedestrianized. there's an arch & anchor at the entrance:

in the 1990s the current arch is built at government st.

in 2008 the canoe sculpture is installed: 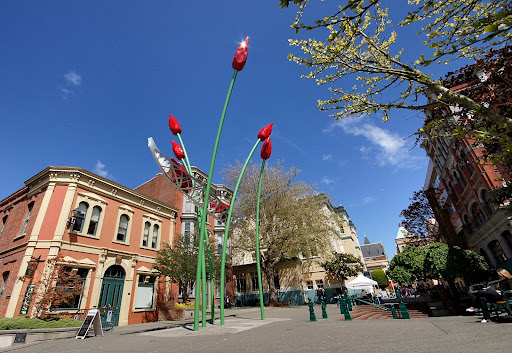 Also, "jail square" would be a much more accurate name than bastion square. of course that wouldn't go over so well. But since the space we know as bastion square today was created when the jail was constructed outside the original fort's palisades, it has a lot less to do with bastions that the location of that original jail & police station!

or at least the seed was planted. I think there's no doubt that everything followed from the choice of the location of that jail. seems we can learn a lot by looking at overlaid maps like the ones above.

The buildings on the south side of the square are roughly a continuous wall obviously because that's where the fort's wall was. When they came down they just put new buildings along the same lines as the wall. I can't figure out why the burnes block, beaver block & macdonald block are set back relative to the jail/courthouse/museum is/was though, causing the square to widen in the lower area. why didn't they line them up with the jail to create a continuous street wall? Maybe it was just because there was so much industrial activity there, and they needed the space. that macdonald block was apparently crowded with workshops & other stuff, so maybe they needed enough room outside for a horse & buggy to turn around (just my best guess). or since the jail was oriented towards the harbour maybe they just didn't want to block the view. whatever the reason, when the burnes & beaver buildings were built ~20 years later I guess it would have made sense to line them up with the existing macdonald block.

Victorians have a reputation for being “more British than the British,” in part due to our enduring love of flower baskets, tearooms and lawn bowling. But are we really “more British” than other Canadians?

To find out, Dr. Alexandra D’Arcy, UVic linguistics professor and director of the sociolinguistics research lab, is searching for clues in the way we speak.

“There’s an undeniably high British presence in the city—roughly 30 per cent of Victoria’s population in censuses from 1881 to 1951 claimed British origin—but born and bred Canadians have been the majority,” notes D’Arcy.“Linguistically speaking, this means Canadians are the primary influence. But this doesn’t mean that traces of our partly British roots won’t persist. What I want to know is where—and how—these traces persist.”

Victoria was settled by Europeans relatively late—robust settlement didn’t really begin until about 1860, she notes. “That means I can trace the development of spoken English right back to the city’s earliest days.”

Her lab’s state-of-the-art language software enables her team to search and interact with sound files, and transcribe and analyze each sample. They look for key words and phrases that are markers of British and North American usage.

For instance, while British people tend to say: “Have you got any butter?” North Americans say: “Do you have any butter?” Other telltale words include pronunciation of the words schedule (skedule or shedule) and news (nooz or nyooz).“With historical as well as contemporary data, we’re able to put the development of English in Victoria into context with the development of standard urban Canadian English,” says D’Arcy.

“These linguistic features are harder and harder to find evidence for in urban contexts west of Quebec,” she adds. “That they are here suggests Victorians have held on to these older, more conservative pronunciations with greater tenacity. This does make us unique!” The study gives linguists a rare opportunity to “watch” a dialect evolve, says D’Arcy—knowledge that will be used to develop better teaching and language assessment tools. And we all get a better understanding of who we are as Victorians. “We seldom think about the way we speak,” she says, “but it can tell us a lot about ourselves.”

^
A friend is participating in this language study. He is a fourth generation Victorian: his mother is participating, and I believe they have a recording of his grandmother speaking that is also being analyzed. It's subtle, but he DOES have a distinguishable accent. I can certainly hear my own "West Coaster" accent when I spend time with anyone outside BC.

...building is continuing at an unheard of pace, and Greater Victoria is likely to reach the same kinds of totals recorded in 2017.

- Read more at the Times-Colonist....

Can something really be considered unheard of if you heard of it as recently as the late 1970s?

It's funny, Victorians today want to marvel at the intense pace of things now by noting how the numbers in 2018 are almost comparable to the numbers back in the 1960s/1970s. But... wasn't Victoria supposed to be small and sleepy back then? If we're impressed by x when Victoria's population is almost 400,000 then shouldn't x+ have absolutely blown our minds back when Victoria's population was still shy of 200,000?

I don't know about "an unheard of pace" for example, there have only been 50 postings on here in the past 15 years about things that stay the same.

This thread is one of those things that stays the same.

"A parking area to accommodate about 30 cars would cost an estimated $10,000... the laminated wood ramp and observation platform, extending over the road, another $10,000..."

"...there was tremendous opposition to parking at night in the area."

"...if such projects were to be stopped by small groups of residents, "we're not going to get anywhere with any beautification."

Still think it would be an awesome place for a restaurant...

The following article might just be one of the best examples ever of the point that I think I was trying to make with this thread. Some excerpts:

A Vancouverite reflects on Victoria:
Jackson, Kristin
May, 1990

The land of the newly wed and nearly dead.

That's what we used to call Victoria when I was growing up in Vancouver.

To many Vancouverites, Victoria was a drowsy little seaside town popular with young married couples and senior citizens. Many of its residents either worked for the government or lived off their retirement cheques.

How suffocatingly quaint, sneered we big-city kids. How unsophisticated. How... boring.

Yet Victoria has changed, and I've changed. The city is growing rapidly and is increasingly sophisticated. My youthful perceptions -- and prejudices -- have mellowed. And now that we're both more grown-up, Victoria strikes me as a fine place to visit or live.

(I won't ask what the writer thought of Nanaimo or Kelowna or Bellingham, not to mention the suburbs of Greater Vancouver.)

Anyway, any guesses as to the year when this was published? Here's some more:

Victoria is no longer a little sister to the bustling, cosmopolitan city of Vancouver on the B.C. mainland.

The Victoria area is booming -- its population increasing by several per cent each year to the current ???,???. New -- and renovated -- hotels, stores, restaurants and homes are sprouting all over.

While modern-day Victoria isn't growing at anything like a gold-rush pace, the city is booming...

'"There are some concerns about transportation and congestion... and about running out of developable land in the urban area,"

Urban growth has already changed the face of the city. In the old neighborhoods near the downtown, boxy apartment buildings loom above graceful 100-year-old wooden houses. New hotels and condominiums are sprouting up around the Inner Harbor.

And Greater Victoria already sprawls for miles; once out of the downtown area the British heritage dwindles and there's little to distinguish its suburbs from those of other North American cities.

It should be plainly obvious that the writer is talking about the new Victoria. Refreshed, reinvented, re-imagined, booming with growth and change...

Right. So... what year are we talking about?

Although something tells me you could probably find the same story from those days, too.

Something tells me you'll be able to find the same story twenty years from now. It just seems to be part of the local shtick.

aastra is making quite the effort to be in the running for VV's Poster of the Year medallion.

I'm sure you'll find some way to job me yet again.

You're going too far back. Be serious now.