Thanks for sharing! At first glance, it's a huge improvement and fits in well with the building directly across Government.
Looking forward to seeing what the Wharf and Courtney sides will look like - some retail along there would really liven up the block.

I think so too, the main issue for me is the stuff at street level. I think that whole block needs storefronts or patios or some other signs of activity & transparency along the sidewalks. Right now there aren't even doors or windows.

...such a huge improvement for that area... Having retail along Government and Wharf is so critical.

The government street side looks great. I love the window heights at ground level. The rehab of the heritage looks good. My only concern is that the modern addition looks a little too much like it is taking its cues from the Belmont Building. The hard lined overhang in particular.

Thanks for the positive feedback so far! I will work on bringing the requested views as soon as I get them. There is going to be about 16,000 sqf of ground floor retail in the proposed plans, which also will have a number of large sidewak patio areas. Livening the entire block is a key goal of this project. Currently it is a dead zone.

^ Agreed the street fronts along every side of that building require massive improvement.

A design that integrates well with the sidewalk would make this project a success.

...My only concern is that the modern addition looks a little too much like it is taking its cues from the Belmont Building. The hard lined overhang in particular.

Actually, that is one of the things I like about this design. It creates a nice symmetry with the iconic structure across the street without mimicking it or adding faux heritage elements (as was done to the current "modern" building on this site). Done well, this new building will create a grand gateway to the symbolic entrance of downtown. Of course once City Hall gets their hands on the design I imagine the resulting structure will bear little resemblance to this design; assuming it gets past those bastions of good taste at all.

What the Government Street side needs is a restaurant/pub. After 10 a.m. when the bollards come up and Government Street is closed to vehicles, the establishment should be able to spread tables outside, as well as Sam's, and at various other places along Government. Obviously most of the tables would have to be removed again by 2 a.m. when the road is reopened for trucks and deliveries for the next day. Tourists and locals would just eat up downtown with that kind of vibrancy.

^ Agreed on the patio idea. I think the south facing side of the building would be the best spot for a good pub/restaurant with a patio (potentially stretching around to the east facing/Government St side). Lots of sun, great views of the water/inner harbour and heaps of foot traffic going by. If it happens, I hope to see something unique there over another Milestone's like chain establishment but that may be asking too much.

Come to think of it, and using my excellent photoshop skills, I think I've found the perfect spot:

My god, is that seagull crap that's coating that roof????

If they're going to put a patio out there they will need a patriot missile defense system to eliminate the seagulls.

Haha lets hope not. But yes there are definitly plans to put in patio space there, and maximize it everywhere else. The building actually only will cover about 80% of the site.

The developers now say in an email to VV that there may be (quote) "drastic" changes to the facade. The massing and heritage portions will remain as currently proposed.

I am not sure I am liking the term "drastic" as I was pretty happy with what was presented so far.

Hi guys, after meeting with some city counsellors the feedback we received was to look at other possible design options for the site. If any of you have any design input you think would be interesting let me know, as having design ideas from the greator community was an idea one city counsellor put forth due to this sites prominence. As of yet no decision had been made on design, but we may explore other possibilities. Some of the criticisms was it copied the surrounding buildings possibly to much and was not unique enough, just some critiques. Due to this sites prominence in victoria we aim to design and build the very best possible building we can!

this came up on another thread. it would definitely be... 'distinct' from the old custom house.

what about something like this facing the harbour. the irregular metallic screen wouldn't clash too much with the grey stone of the existing building. it would be a really cool juxtaposition imho:

from the harbour I guess it would look something like this

In the end I think what matters most is the interaction with the surrounding area at street level. I guess 100 residential units on that block is great but I also think it almost doesn't matter what else is done or what it looks like if the street level isn't fixed. The renderings that have been released so far seem to be on the right track. Maybe at one time when there were currency exchange & CRA offices in there it made sense to have a single entrance/exit but it really held back the rest of the area.

So CLEARLY (tongue planted firmly in cheek) the City is looking for something very cutting edge for this location. I would suggest perhaps using Frank Gehry as inspiration... 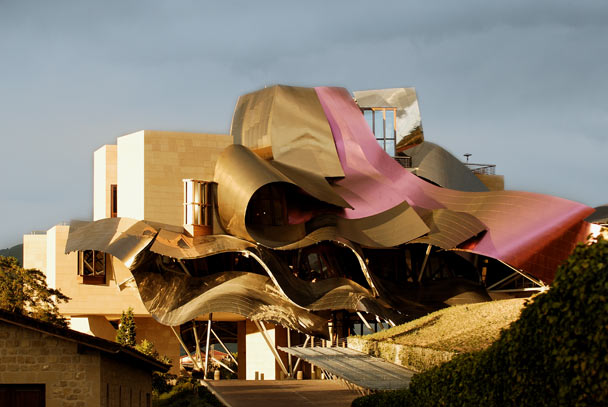 In response to mikes use of the word "drastic" I believe this is far to strong a word. We are simply looking to make minor alterations to the design, it's not going to be a complete remodel, just change some design elements and features here and their. My apologies for the confusion on wording, I missed it earlier.

I would also say the city hasn't directed use in any direction, just to investigate some other design ideas for the current plan. When I have the next version of the plans I will post them.

One more comment in regards to my initial post today, I should have worded it more like "exploring input ideas on th current plan". Not seeking drastic design changes as this was the intended post. My apologies for all the confusion, I misinterpreted some wording earlier myself.

All I ask is there is no faux heritage or obligatory red brick elements...and whatever Pam Madoff suggests, do the exact opposite.