My latest favourite is Radiolab. Amazing.

I love CanadaLand for my politico media fix.

There's our local and informative Lisa Gene and Eric Show which should be essential listening for VV fans.

The Joe Rogan Experience is unexpectedly informative and entertaining.

What a great idea!!!

When I walk my dogs I have a variety to choose that I really enjoy;

Desert Island Discs has to be one of my favorites. Its over 30 years of interview with famous and not so famous people about what music they would want on a desert Island...sounds corny, but its a BBC classic with interviews with folks like Judi Dench, Michael Caine, David Attenborough, Tom Jones, etc....

WW2: War and Words BBC; best one I found this week is a 12 episode (15 min each) about the role the BBC played in WW2

Friday Night Comedy Podcast, but only when it's the Now Show or the News Quiz

and of course lisa, gene and eric and any of the growler hour shows both at 29er radio (thanks for the shout out gumgum)

joe rogan is moving to a spotify platform exclusive by the end of the year.  still free to watch/listen.

Joe Rogan, comedian and host of one of the most popular podcasts in the world, is taking his show to Spotify. The Joe Rogan Experience will soon become a Spotify exclusive, meaning episodes’ full audio and video will only be available through the platform starting later this year. Up until now, Rogan’s show has never been available on Spotify, let alone exclusive to any platform.

The show will become available on Spotify globally starting on September 1st, and it’ll become an exclusive sometime after that point. Listeners won’t have to pay to access the episodes, but they will have to become Spotify users. Spotify said in a press release that Rogan retains creative control over his show. It didn’t disclose how much it spent on the deal. The company will also work with an ad agency to jointly sell ads against the program. Rogan said last year his show reached about 190 million downloads a month.

Spotify’s podcast ambitions always directly targeted Apple, which, up until now, has been the biggest name in podcast players. But with the Rogan deal, Spotify also has another new target: YouTube. When it began testing its video podcasting feature earlier this month, it did so with the backing of two popular YouTubers. Rogan is one of the most popular YouTube podcasters, often with millions of people watching each episode, so losing his voice on the platform is a major hit to YouTube and a big gain for Spotify.

Half the fun was seeing the best-of clips from his shows on YouTube. Now Spotify will copyright restrict the content and it’ll be a mess.

Remember shock jock Howard Stern, the guy you’d hear syndicated on a station or two in our region? Yeah, neither does anyone else. He disappeared when he switched to satellite exclusively (I can’t even remember the name of the satellite company!).

Stern yanks in $90M US a year on SiriusXM and it has been a smash hit for both parties. He has more listeners then any other podcaster in the world.

What?? Well I’ll be. I didn’t even know the guy still had a show!

Adam Corolla pulls in $11M a year working for Westwood One or Salem. Big dollars. I’m sure Rogan is making a killing.

Adam Corolla pulls in $11M a year working for Westwood One or Salem. Big dollars. I’m sure Rogan is making a killing.

Spotify is reportedly paying in excess of $100M for the licensing deal. The podcast itself had revenue of $30M in 2019. 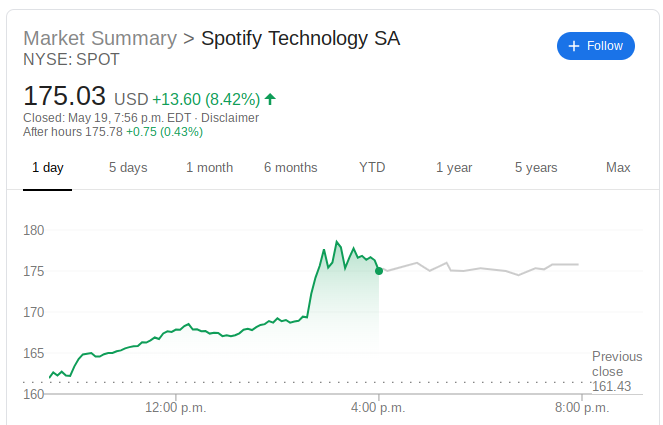 i am reminded though that prageru ads got booted from spotify.  bad bad tech.

Wouldn’t it be something if Joe brought Prager back.

The podcast has evolved into a major money-maker for Rogan, who had been best known for hosting Fear Factor and supporting roles in sitcoms like Newsradio before starting The Joe Rogan Experience. He has claimed that his show gets as many as 190 million downloads per month. Between ad revenue, live shows and YouTube broadcasts of the program, Rogan made $30 million last year, making him Forbes’ highest-paid podcaster of 2019.

With this new arrangement, Rogan’s future earnings will dwarf that figure. Terms of the deal were not disclosed but the Wall Street Journal is reporting that the deal is worth more than $100 million. Spotify has been willing to pay fat sums in order to get the biggest names in the business. It shelled out $155 million for Bill Simmons’ The Ringer earlier this year (with another $51 million coming down the pike), and $194 million for Alex Blumberg and Matt Lieber’s Gimlet.  In pursuing Rogan, the streamer is looking to convert his massive fanbase into subscribers. For Rogan, the money may be too good to pass up.

“It’s the Howard Stern move,” says an industry expert, who estimates that Rogan’s deal with Spotify will be as lucrative as Stern’s with Sirius XM. Forbes estimates that Stern made $93 million in 2019.

Donald Trump Jr. announced he would be joining libertarian commentator Dave Rubin’s alternative social network Locals.com on Thursday in an effort to take on Silicon Valley.

In response to Twitter’s new feature which allows users to turn off replies to their tweets, Rubin claimed on the website, “This is just step one… Soon certain people will be able to choose not to be quote tweeted either. The media and big tech industries are destroying themselves hand in hand,” before encouraging people to join his own social network.

“Im in,” responded Trump Jr, who appeared on Rubin’s YouTube show The Rubin Report last year. “LMK. People with opinions who don’t just mimic those of the leftists in Silicon Valley definitely need a place where they don’t have to be concerned about being deplatformed demonetized etc. etc. by an arbitrary board of leftist thought police!!!

Relatively politically liberal, Rogan has supported Bernie Sanders (though recently shifted his support to President Donald Trump), is pro-choice and believes in more social spending for the working class, but he also regularly gives right-wing commentators the space to share their ideas and often questions issues of LGBT equality. So it’s not all that surprising Rogan is loved by so many and that, as a figure who perpetuates a kind of toxic masculinity – what with his penchant for hunting, MMA fighting, and heteronormative views – he has become a beloved figure particularly in conservative circles that largely thrive online.

the daily wire is moving its entire office (and nearly 100 staffers) from los angeles to nashville tennesee.

Technical Alpha: Comedic technology and digital media (video games and film) podcast. Two hosts who occasionally get in somewhat heated arguements, but manage to be the best of friends again in the next segment. Their creative ad reads are better than half of the stand up comics I've heard and it's off the cuff.

spotify wokesters must be pulling their hair out.