42 replies to this topic

Tentatively known as The Residences at Royal Oak, the building will be situated at Tri-Eagle Plaza near the nexus of West Saanich Road, Glanford Road and Quadra Street and just south of the Royal Oak Shopping Centre. 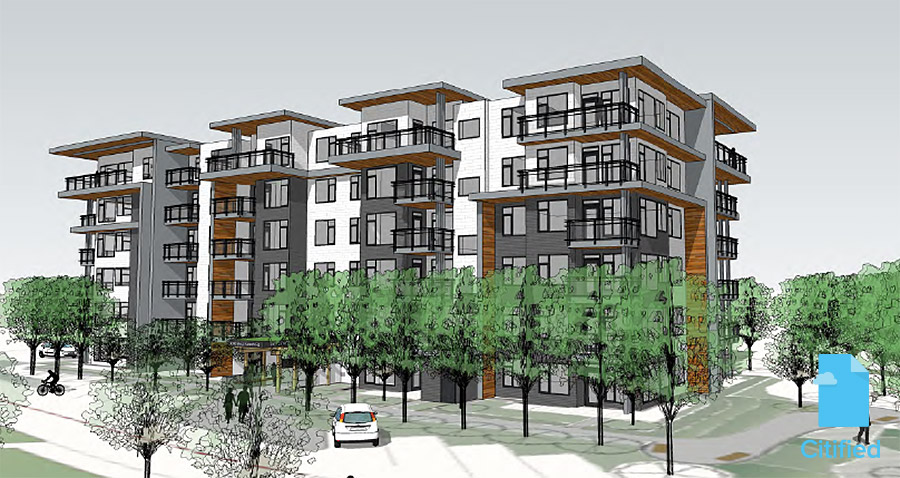 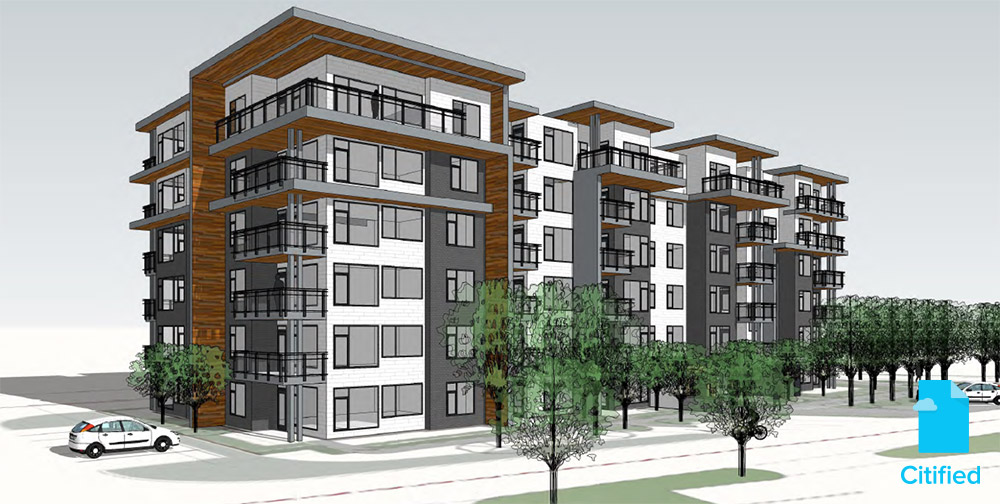 There is an excellent trail network from there starting with the Royal Oak Trail.

Interesting, Saanich considers both Royal Oak and Broadmead a single urban centre, although they really function as two separate centres given the highway that bisects them.

Nice. Do you know where it will be situated on that site? From an overhead view, I would suspect it would be right across the small road from McDonald's, which might make the North facing units harder to sell than normal... 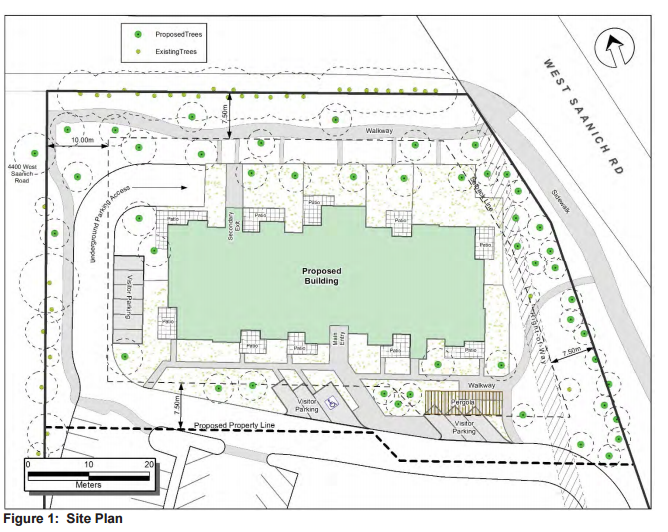 A 60-unit residential development has been approved by Saanich council for an empty lot at 4396 West Saanich Road south of Royal Oak Shopping Centre.

Dubbed Radius at Royal Oak, the six-storey woodframe condo from developers Tri-Eagle Development and Jawl Residential, will include a collection of one- and two-bedroom homes ranging between 630 and approximately 1,200 square feet. In-keeping with the duo's affinity for ground level garden homes made popular at their recently sold-out Uptown Place development, a collection of the sought after units will also be available. [Full article] 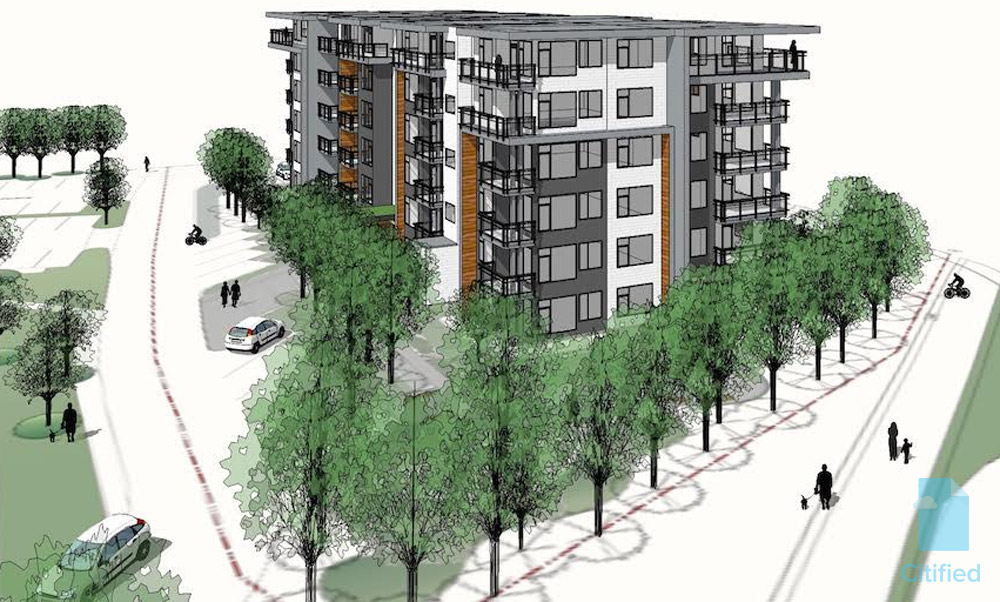 This project is now proceeding as a 66-unit purpose-built rental project.

This building is starting to take shape.

The thing I like about this project is its location.

Close to transportation and shopping, and not close to other residential neighbours.

I have sent my assistant to the site to get some detailed information so standby for that. In the meantime here is a shot taken from the rear of the building. I like the rear. Quieter and afternoon sun. 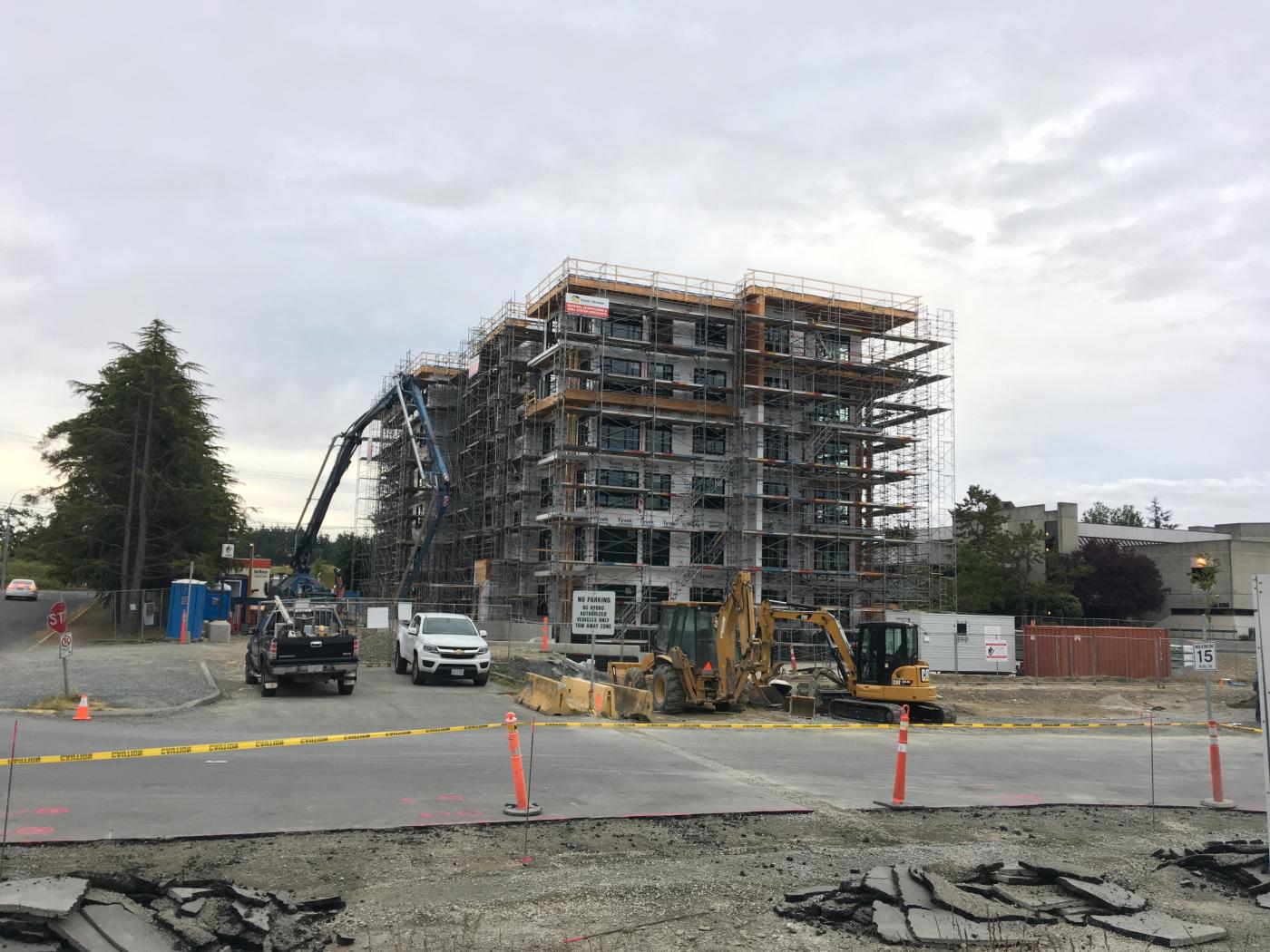 Went to their contact page and it looks like Devon is the property manager. They're really going for these new suburban rentals.

< 1500 is their lowest price bracket in their application form while the smallest unit is just over 500 sqft. They seem to be going for a high end price tag.

With vacancy rates as low as they are I think a lot of people will suck it up even though the project seems to be lacking on perks you'd expect in a luxury complex. The finishes and proximity to nature is what's being marketed. They should also advertise that there's no Colwood Crawl or tent cities to be experienced.

The building is not your typical rental. Nine foot ceilings throughout save for some top floor units with 11 or 12 foot ceilings, ample underground secure parking and higher end finishings.

Yup, the materials are quality and the design is slick. But for the price range they seem to be aiming for I expected stuff like an exercise room, a pool and/or some sort of pampering. I'm selling the location short, though - proximity to the outdoors and other natural amenities is a given in nearly all of the CRD so I don't think they're swinging above weight in that department. $1500 as a floor for a 1 BR is basically what you pay for a new-ish suburban condo close to transit in Metro Vancouver.

It’s also what you’d pay for a one bedroom in downtown Victoria, and far more depending on the unit height.

But its not downtown?

Isn't it a slippery slope to start thinking rentals in the suburbs are worth as much as downtown, when really all they have is a higher ceiling?

In my first VV post I remarked how rental prices in downtown aren't much higher than in the nearby suburbs for similar units, until you get to the Westshore or Central Saanich; I suppose there's a systemic preference for that. People (particularly families and older folks) would rather live in a quiet residential neighborhood a couple of kilometers from the core than live where noise, pollution and crime are concentrated, even if it would be convenient. Victoria isn't a big city so even a neighborhood by the countryside like Royal Oak is a manageable drive away from work and entertainment. Most of the regional population doesn't need to spend 1+ hours behind the wheel every workday.

There's probably some supply-and-demand at work too; tons of older rental stock in and around downtown that drives competition but outside of some main arteries there are few rental options in Saanich. So if the preference for residential silence that's not too far from town does exist, then the scarcity of rentals would also drive their price up. Cadboro Bay's charm comes in part from a lack of long-term renters, if you will.

Now, downtown rental price tags can be a bit misleading because there's a lot of penny-pinching; your unit probably doesn't come with parking, you might have to pay extra for storage and your bike needs to go somewhere that won't get stolen overnight. For new rentals those things can easily add up to $200+ per month. But the difference is still not very pronounced. Good for the car-ditchers, who might pay less bills living downtown than those living much further away.

(but aha - no car equals no Costco trips! What do you say now, Kev?)