The tallest structure of BC Housing's Nigel Valley Development in Saanich could rise to 16-storeys and will co... (view full profile)
Learn more about Nigel Valley, C1 on Citified.ca

I wonder how hard it would be to restore the creek & have it go through a park-type area in the middle of the neighbourhood. maybe it wouldn't be worth the effort.

It might be the biggest redevelopment of its type, not only in the province but in the country.

The newly orchestrated Nigel Valley Project in Saanich is a combination of the five existing social service and housing providers situated between Vernon Avenue, Saanich Road and Darwin Avenue.

B.C. Housing has made the first step with a rezoning application to Saanich and is leading the project, which could reach $100 million in costs. It will see a 15-year-replacement plan for Broadmead Care’s Nigel House, Island Community Mental Health’s Darwin apartments and Newbridge apartments, the Garth Homer Building, Greater Victoria Housing Society’s Nigel Square and B.C. Housing’s wheelchair-accessible Battin Fielding townhomes and apartments.

There are currently 63 residents in the Island Community Mental Health buildings, 18 in affordable GVHS units, 26 in Nigel House, and 79 in B.C. Housing units. Garth Homer supports 200 day clients. Those numbers could increase as high as 124 for ICMH, 67 for GVHS, up to 75 in Nigel House, 168 in B.C. Housing units, and 75 new residential care spots for Broadmead, though all numbers are preliminary.

“Some of us began lobbying for this years ago and eventually we attracted the interest of B.C. Housing, who agreed to put money into the master plan for the project,” said Garth Homer Society executive director Mitchell Temkin. “There’s the expression it takes a village to raise a child, and we’re saying, it takes a neighbourhood to make a life. It’s our real ambition to make a place for people who don’t have opportunities, people with mental health or physical disabilities, or limited funding, a place for them to make a life, and the key thing to impress here is it’s not just a bunch of real estate.”

In total, the development proposes 14 new buildings. Twelve are between four and six storeys, which includes two potential market housing rental buildings, as well as an eight- to 16-storey market rental building. B.C. Housing has a preliminary plan for an eight-storey non-market residential building. All these will sit on top of additional fill, as the valley was already filled in 40 years ago to hide a creek that feeds Swan Lake.

In total, the development proposes 14 new buildings. Twelve are between four and six storeys,

Insufficient density to make much of a difference in the overall housing stock in the area.

the print version of the article says it will be about 400 units of affordable & supportive housing, that's not chump change

the print version of the article says it will be about 400 units of affordable & supportive housing, that's not chump change

Compared to how many today?

well the 4th paragraph has current & projected numbers. it looks like number of units should double or triple although nothing is finalized.

The Neighbourhood Plan for the site offers some conceptual drawings for the area and how the 16-storey market residential building may look:
http://bchousing.org...urhood plan.pdf 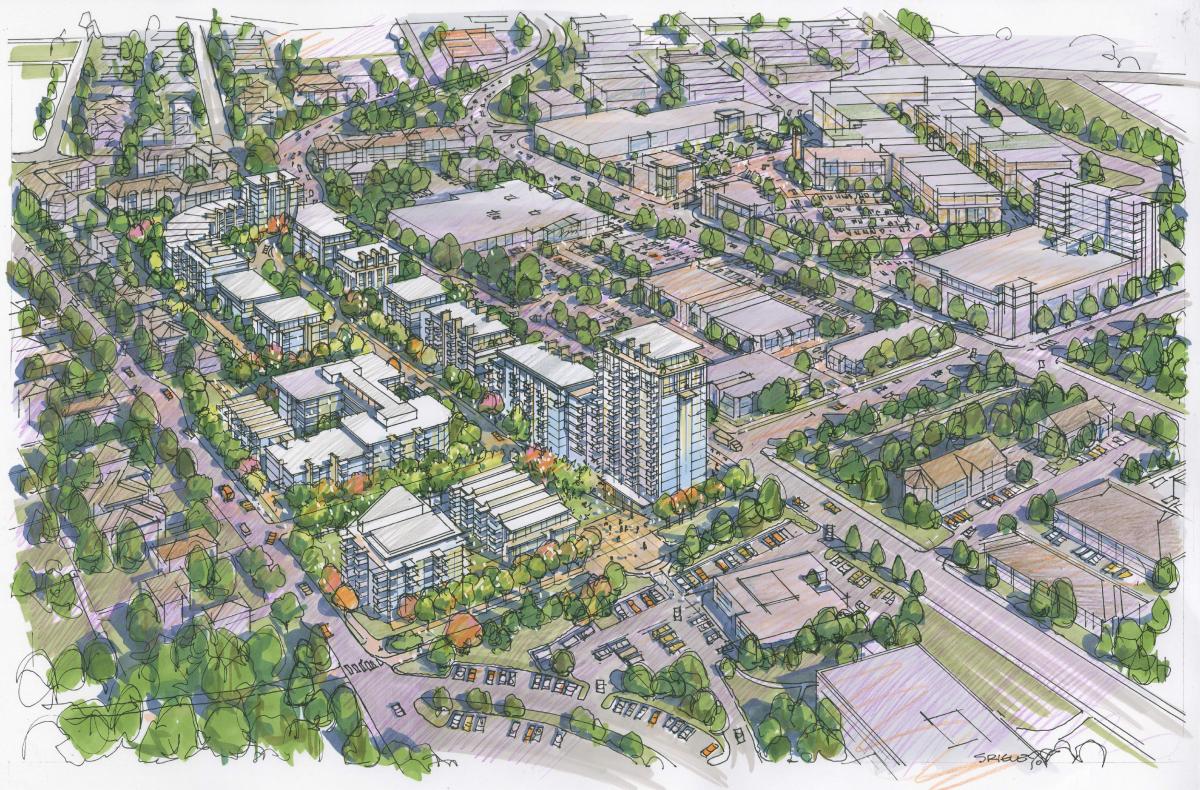 ...how the 16-storey market residential building may look:...

Out of place - since most of the remaining buildings are barely mid-rises and mostly low-rises.

Looks great. I like how they included the 11 storey rental at Uptown. combined with the proposed condo on boleskine and the mark one development, all that new density would be great for Uptown. Plus it would be nice to have a group of relatively tall buildings outside of downtown

Only a matter of years before the Save On foods plaza in the middle gets a huge redevelopment including high rise condos (with two and three bedroom units) to take advantage of the views and access to Uptown. Such a waste of land currently, from Save On to Tim Horton's at the end.

Well today at least I have fulfilled and maintained my life goal of learning at least one new thing or fact each day. My grandparents lived on on Darwin Avenue for nearly 50 years and I never ever heard the "Garth Homer" block, as we used to refer to it, called the "Nigel Valley". Interesting. I agree with RFS though on first blush this is a great proposal and will re-mediate or hopefully replace altogether that series of older tired structures currently on that land.

The proposal will reduce Vernon Ave to 3 through lanes, create a new sidewalk behind boulevards, and include some form of improved bike infrastructure (buffered bike lanes at minimum), and a new pedestrian crossing.

I agree with amor. Daylighting the creek would be fantastic.

16 storeys on the one corner, not bad!

They are going to have a heck of a time getting traffic to comply unless they adjust Blanshard all the way back to Mayfair, maybe narrow it down to 1 lane alternating in each direction ;-)

That section of Blanshard will become a two-way street, I believe, as will the southbound section.

That section of Blanshard will become a two-way street, I believe, as will the southbound section.

That's a separate consideration.  The Nigel valley project assumes a northbound 3 lane redesign of Vernon Ave, with a buffered bike lane, boulevard and new sidewalk on the east, plus a mid-block signalled crosswalk.

Looks like they're going up to 16 stories on the BC Housing part. Could that be Saanich's tallest building or is the uptown one larger?

Looks like they're going up to 16 stories on the BC Housing part. Could that be Saanich's tallest building or is the uptown one larger?

Depends on the interior heights, but Uptown will probably be shorter at 11 storeys (http://vibrantvictor...oved/?hl=uptown)

Broadmead Care expects to start construction on its 75-unit seniors care facility as early as they can next year.

Know it all.
Citified.ca is Victoria's most comprehensive research resource for new-build homes and commercial spaces.
You're not quite at the end of this discussion topic!