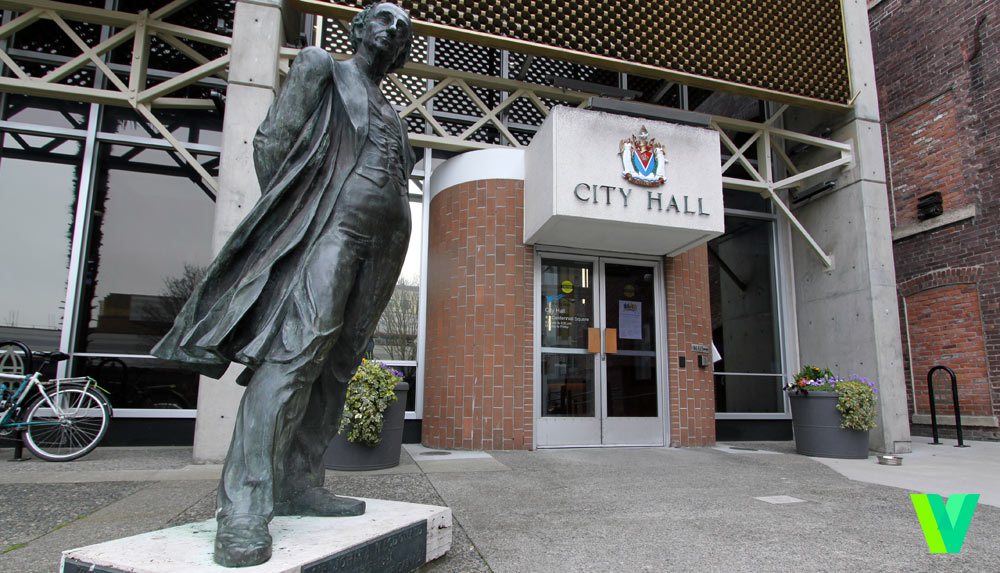 Could the statue of Sir John A. MacDonald be on the move from its 34-year perch at the southern entrance to Victoria’s City Hall?

Possibly, according to a City Hall insider.

The source, who is familiar with going-ons at #1 Centennial Square, confirms that several years ago the Sir John A. MacDonald Society approached the City of Victoria to float the idea of relocating the first Canadian Prime Minister’s statue to the Inner Harbour or Centennial Square where it would command a greater presence.

Although the idea failed to gain traction at the time, recent musings that parallel the Society’s long-held desires could lead to a mobilization of like-minded efforts during Victoria’s Year of Reconciliation.

VV’s source tells us that members of local First Nations bands have posited the idea of relocating the effigy to an alternative location should a decision be made by the City of Victoria to install aboriginal artwork in place of the statue.

However, situating First Nations art may not necessarily be limited to the exterior of City Hall and may instead appear inside the lounge or foyer, leaving Sir John A. in place.

At this time no formal applications related to the relocation of the statue have been submitted to City Hall and discussions with elected officials on that topic have been brief. Should plans change the City is expected to initiate a public information and feedback process.

If I say I am triggered by the removal of the statue, can it remain?

Queen Victoria is going to be rolling over in her grave.

On 8 March, the British North America Act, which would thereafter serve as the major part of Canada's constitution, passed the House of Commons (it had previously passed the House of Lords).[70] Queen Victoria gave the bill Royal Assent on 29 March 1867.[71]

Macdonald had favoured the union coming into force on 15 July, fearing that the preparations would not be completed any earlier. The British favoured an earlier date and, on 22 May, it was announced that the Dominion of Canada would come into existence on 1 July.[72]Lord Monck appointed Macdonald as the new nation's first prime minister. With the birth of the Dominion, Canada East and Canada West became separate provinces, known as Quebec and Ontario.[73]

Macdonald was appointed a Knight Commander of the Order of the Bath (KCB) on that first observance of what came to be known as Canada Day, 1 July 1867.[74]

Queen Victoria is going to be rolling over in her grave...

Re-naming the City of Victoria is also on certain council members' agendas.

Not that it will matter to anyone on the CoV council, but this plan is not too appealing on the CHEK poll:

I mean it's just the opinion of "settlers" after all.

So much virtue signalling and white guilt here.

Was the guy an a$$? yup. Was he the architect of the Residential Schools that were around into 1996? Nope, Residential Schools started in the 1830's in New France and New Brunswick and were run by Anglican, Catholic and Methodist church groups long before Sir John A.

Did he ramp it up? most likely. Was he a racist? By todays standards yes, back then...not so much.

I think this is the wrong move. a more appropriate move would be to move the statue perhaps to the grounds of the Empress or at the back of the Leg by the Fountain and place a plaque telling the story of who he was warts and all.

Churchill was no different, he was a nasty drunk and carries some serious baggage around with him but he is also recognized as the person who saved us from tyranny...MacDonald, while not of the same stature, was the father of confederation and our 1st PM....that should stand for something

Agreed. His views were objectionable even then, but hiding the statue just seems like an easy, knee-jerk "quick win." Like a lot of our mayor and council's moves, it feels like the far far left equivalent of buck-a-beer.

...Like a lot of our mayor and council's moves, it feels like the far far left equivalent of buck-a-beer.

Pandering to one's base is a non-partisan political strategy. Unfortunately it often works.

CHEK News poll results are not moving in the SJWs favour.

I would like to see the statue moved to the grounds of The Empress. This would be a good compromise that would respect all parties.  It is important to remember that two decades ago, it was the supporters of Sir John A. Macdonald who wanted the statue moved away from City Hall and to a more prominent and respectful location.  Here is a Times-Colonist article from February 11, 2000:

The mayor said today on CFAX that history should be re-written and is constantly being rewritten.

I think she meant it should be revaluated and historical notions challenged, but “re-writing” history means hiding one truth in favour of another, or arguing (with insufficient facts to back it up) that one truth is no truth at all.

Why couldn’t we have appended an info box next to the statue or changed the description to a more modern take on who he was? Why remove it and hide it?

I ask because as a former resident of a Communist country and someone who had family suffer at the hands of the Nazis and the Soviets during and after the war, the Swastika is a symbol that is very toxic and emotionally draining. But so is the Hammer and Sickle, and equally so I might add. And yet its flown in my community during protests. Products are made and sold in my community with that symbol and derivatives of it, and politicians in this country wear garbs depicting that symbol and they do with so with completely immunity and indifference towards anyone who may hold a very different opinion of that symbol and what it represents.

And the great irony is that that symbol and the feelings towards it many Victorians hold are relegated to insignifance by the same people who champion the removal of MacDonald’s statue.

And you won’t see a Lenin statue at city hall.

You are basically making the city’s point Mike. You wouldn’t appreciate a communist statue at city hall, and First Nations don’t appreciate one of a guy that thought they were savage sub-humans.

An easily understandable sentiment I should think although I imagine that this will not help the mayor or council politically.


...Madoff searched the city's archives and said she can not find support for the society's claim that the City Hall location was to be temporary. And although Madoff supports the society's right to ask to move the statue, she disagreed with some of its reasons. Madoff said the statue's location -- on Pandora Avenue across from a pub and a corner known for drug dealing and prostitution -- is not obscure and that it does not need a plinth. "One of the things I've always found so delightful about Sir John A. is that he's on a pedestrian level which creates a different kind of interaction with the art," said Madoff.

So assuming she voted in favour of removing the statue today, what has Ms Madoff learned about Sir John A's history about which she was ignorant 18 years ago - or are her morals just that flexible?

Come on kim jong un. Get some nukes and erase the mistake that is the unceded traditional territories of songhees and blah blah blah

...the great irony is that that symbol and the feelings towards it many Victorians hold are relegated to insignificance by the same people who champion the removal of MacDonald’s statue.

The feelings of those people don't matter. All people may be created equal, but in addressing past wrongs the opinions of a large majority of the population are ignored.