another old idea i had was bc transit taking over the harbour ferries, charging $2.50/ride (the same as a bus), becoming a proper vaporetti service & run between odgen point & admirals rd (tides permitting), using the gorge as our grand canal. then the gorge wouldn't be an obstacle separating victoria from vic west & esquimalt, it would be a highway. this bamfield/vicwest concert & exhibition ground would be one of the stops of course because there would be 10,000 or so people going there for concerts in summer. or tobogganing in winter.

City is only as good as it’s transportation system and buses and bikes are boring. Most people won’t ride on something boring.

^I think he was suggesting using boats.

City is only as good as it’s transportation system and buses and bikes are boring. Most people won’t ride on something boring.

that may be a factor, a lot of people like to sit upstairs on a double-decker. i think it's also important that the door-to-door time is fast as other transit for people to use it regularly. so for example to get from james bay to chinatown by bus someone would first walk to their nearest stop, take the 30/31 & get out at the old bay building & walk down fisgard. would it be faster to walk to fisherman's wharf, vaporetto to canoe brewpub & walk up the hill from there? maybe, buses would probably have to make more stops & deal with stoplights & other traffic on the road. or going from from james bay to silver city partly by vaporetto would probably be faster than by bus alone. i've taken the 11 from downtown to silver city & since its route isn't very direct it feels like it's only about 5 minutes faster than walking. plus coming from james bay someone would have to take a 30/31 to douglas & transfer to an 11 from there. on a vaporetto they could get on at fisherman's wharf & get out at gorge point pub & walk from there or transfer to a 26 which runs all the time & goes past tillicum mall

The Gorge used as a transit service thoroughfare has been discussed before but it never grew legs. Imagine how popular that would be in the summer months. To make it safe you’d have to blast out the rocks below the Tillicum Bridge and you could quite literally operate a service right up to walking distance to Vic General, perhaps after a little bit of dredging as Portage Inlet is named for a reason.

it would be popular in summer. blasting those rocks will never happen though out of fear of change.

erosion will do the job in 1.7 million years though.

it would be popular in summer. blasting those rocks will never happen though out of fear of change.

erosion will do the job in 1.7 million years though.

you could quite literally operate a service right up to walking distance to Vic General, perhaps after a little bit of dredging as Portage Inlet is named for a reason.

that's true, the opening under the new bridge is wide enough. they could dredge a channel nearly to the helmcken park & ride. there could also be a stop on christie point that a lot of people would probably use

too logical. some group will oppose. Opening up the reversing falls has been discussed longer than opening up government street.

Add some bay gulls and you've the makings of a great waterfront cafe.

People would come to relax after shopping at Portage Inlet Outlets.

The final element would be a condo tower by Westbank called "The Reversing Falls". Pressurized water would jet out of the ground all the way up the side of the building.

Nobody liked locks and bay gulls? I still can't figure this crowd out.

as i was looking at the harbour ferries i changed my mind, bc transit doesn't need to take them over. they have different purposes and if someone wants to tootle about for 45 minutes on a sunny day & hear the rattenbury story i don't have a problem with them having that option. i'm thinking of people who have a schedule to stick to & want to keep victoria moving & git 'er done though. so i'm sure it might be a nice ride it should get them from A to B at least as fast as a bus currently for people to use it on their daily commute. & i think that's realistic because since there's so little other traffic (especially beyond the trestle) & no stoplights it's almost like a grade-separated subway or skytrain. to see just how easy it would be to do this, the kennet & avon canal connects bristol with reading, is 140km & consists of 105 locks. originally it was built to transport freight but fell into disuse soon after the railways were built in western england. over the course of many years beginning with volunteers it was finally restored and is now used mainly by tourists looking for adventure. at certain points the canal boats have to share a river (avon or thames) with other traffic and the people (who likely aren't expert pilots) seem to manage just fine anyway. there are also the 105 locks to navigate. if they can manage something like that without incident i don't see how we could screw this up.

- western terminus could connect with the helmcken park-&-ride in some way. it would probably require some dredging to create a channel where the bus would dock. portage inlet looks more like a mud flat there due to all the silt from craigflower creek but i think it would be a big benefit to be close to the park & ride.
- next stop would be on craigowan. there's a part in the middle where there is already a small parking lot and it is too narrow to build anything. so put a bus stop on the eastern side which has no silt buildup
- next for obvious reasons of connections to other modes is admirals rd. one could mark the route under the bridge with buoys to make sure the ferry makes it through where there is the most clearance.
- a couple options along gorge rd are an existing boat launch (you can see the steps down to the water line from the path) or at the new public-washroom facility. or both, who says there has to be just one route?
- next is gorge park. this may be a good spot for a floating tea house or something like that for someone who wants to stop in on the way home or whatever
- next is gorge point pub. i wouldn't way i have a preference about a lock there, blowing away the offending rocks, or switching to smaller-draft here buses for the upper-gorge section. as we can see though, this is only the halfway point between johnson st & portage inlet so i think we'd miss a lot if the transit route ends here. again, this is a multimodal node like at admirals where people can walk/bike/bus/boat/drive which i think is an obvious benefit
- then there's a quiet narrow section before the banfield natural stadium where we would have concerts with a floating barge stage. the park maybe needs some light landscaping to smooth out the seating area but nothing drastic, the potential is definitely there. there's also the vic west residential area & connection to the galloping goose not far away
- then glo pub, selkirk waterfront, gorge rd, another connection to the galloping goose
- bay st, another obvious multimodal connection. whether to have one also at pt ellice house i don't have a preference. the one on the south shore is at the intersection of the galloping goose & bay st, harbour rd & westside village are right there
- a stop at rock bay to connect with the pedestrian bridge & north end of store st
- canoe brewpub, chinatown, store st, johnson st, connection to the #15, #24 & $25 buses 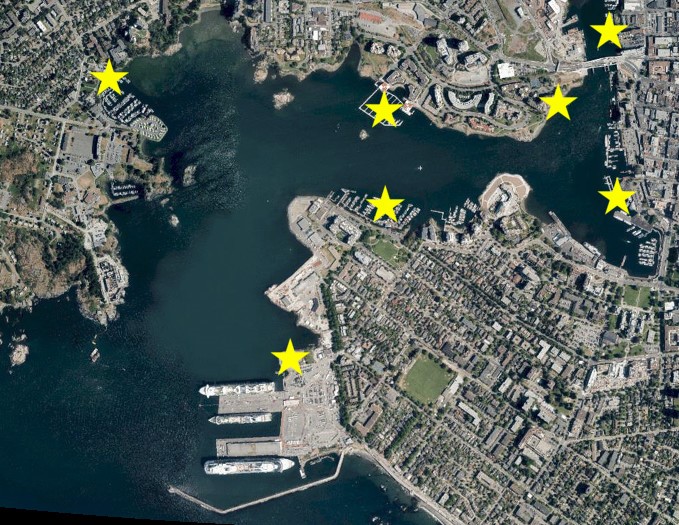 i think these stops aren't that surprising. the current water taxi already uses most of them
- i don't know whether a terminus at ogden point would be needed but that could service that part of james bay
- west bay marina, on head st, on the bus 25 route & near esquimalt/head & connection to the #15
- fisherman's wharf, obvious
- new marina in songhees, again obvious
- inner harbour causeway vs ship point I went with ship point mainly because of the rebuilt festival area & i think it would be less congested there. no real preference though

I'm now reminded of the harbor ferries down in Sydney, Aus. There's a ferry route that runs a good way up the Parramatta River, probably a greater distance than being discussed here, but still a similar concept.

To run a more efficient transport system transit vessels should have priority and the ability to travel at high speeds.