[Admin edit: to view the earlier proposal for this property, click here]

Yep, come by and say hi, we have a new design that will surprise you

/\......thanks for the update: I do have to wonder though by "less visual impact" whether that is really nothing more than Victoria code-speak for 'short and squat', a building form this area seems to have perfected to an art-form over the last 40-50 years and - as unfathomable to me as it is - seems to be perfectly alright to a large swath of the population, unfortunately.....

^I was about to say the same, though I'd have to see a higher quality image to give my thoughts on it. Will we have to wait until the 12th to get a higher resolution rendering?

Yeah it sucks that less visual impact is considered a virtue

What about this neighbourhood suggests that "less visual impact is a good thing"? Are views of Mayfair Shopping Centre or Denny's sacrosanct?

In case anyone needs a reminder as to the current "visual appeal" of this area of town. 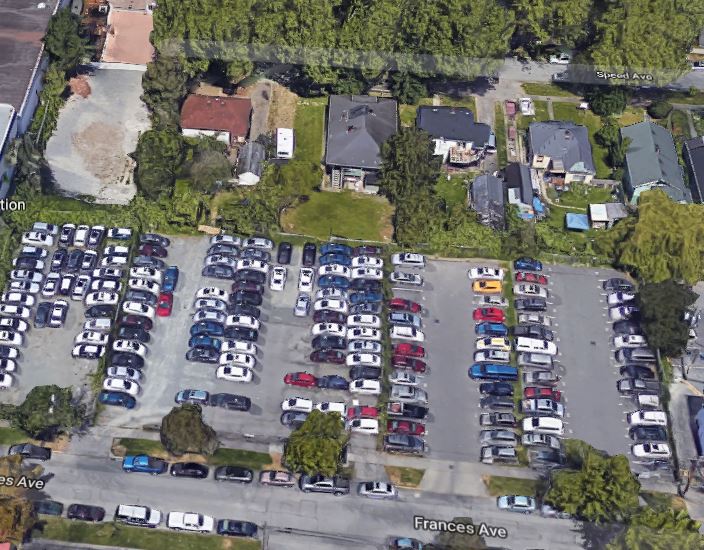 Well we can but hope the 'less visual' impact caveat does_not in fact infer a short fat little SOB of a building. Fingers crossed on that score.

Regardless and in general this is where Victoria gets it completely wrong IMO; unlike YVR for example where they understand density - in their case typically near key Skytrain stations and malls like Metrotown, Brentwood and Oakridge - is a good thing and that those places especially are where you should be building taller, this area just can't seem to make that leap of logic.

For the life of me I'll never understand the appeal of the Victoria Special - short, fat, boxy, squat and (generally) fugly.

Of all places locally this one is a great example of the exact type of location which should be pushing the (height) boundary: its on a major road and transportation arterial corridor, there are no sacrosanct elements like Old Town, or the harbour or mountain views requiring 'view corridor' consideration, and its directly across the street from a major mall.

Car lots aside what priceless other "view" in the immediate area requires there be 'less visual impact'......Beautiful Downtown Burnside?! The VanCity credit union? Or perhaps to shield the senses of the patrons of the KFC and Starbucks outlets down the street....? Purely my opinion but its a completely wrong-headed development and especially zoning philosophy.

We used to be notorious as a flat 'table top' city of mostly 3-5 floor box buildings with the very occasional structure "soaring" all the way to double figures. Only difference today is the top of the table is now slightly higher, at 12-14 stories on average with a very small handful of buildings a few floors higher. However its generally still pretty mundane and not particularly inspiring.

The Speed Avenues and the proposed rental building at Uptown to cite but two examples, should be leading the way to breaking that stuffy stereotype.....

the sneak peak appears to show a ~ 16 floor building and a much smaller one as opposed to two 12-floor buildings approved.

maybe the shorter building is wood frame on top of a concrete podium. hard to tell. and these changes would help the affordability part.

Will this be an all rental project ...?

Excellent news, and thanks: hence why I employ a qualifying preface like "Well we can but hope the 'less visual' impact caveat does_not in fact infer a short fat little SOB of a building. Fingers crossed on that score."

Looking forward to seeing the final rendition; the area is slowly improving and hopefully this development will spur on that process.....

I’ll post a few of the display boards and renderings up here tomorrow for ya’ll to discuss, curious to hear feedback as we’ve put a ton of work into the redesign.

...I’ll post a few of the display boards and renderings up here tomorrow for ya’ll to discuss...

A Ridiculous project. Greedy. The builder is looking to get a big profit only. No consideration for the local community.

I live on Speed Avenue so these buildings would be right on my face.

Speed Avenue is a VERY SMALL street; you cannot build such buildings on such a small street. The parking is already ridiculous as of NOW. If the building is burning down, a fire truck cannot come to our building because of the parking issues, because cars are parked on both sides of Speed Avenue so a firetruck DOES not fit. The garbage company could not collect the garbage for like a week because they were not able to drive the truck on our street. HUGE parking problem. You want to build another 12 stores buildings? 2 of them? RIDICULOUS.UNSAFE.

Does anyone at City of Victoria is actually listening to what local residents on Speed Avenue have to say?? Why do you approve such unrealistic projects??

Affordable housing is something that the builder wants to 'sell' us. Young people cannot afford to live in Victoria. Unless you have rich parents.  To try to 'sell" affordable housing in Mayfair area means simply lying to your face.

This location needs LESS density not more density. Build a park instead.

This is exactly where density should be going. The entire strip from Uptown to Downtown should be 8:1 FSR if not higher.

First thoughts from the open house...

Going for engineered wood construction, which is interesting

Shadowing is better than the previous proposal

Lack of parking is *going* to be a huge issue

Main entrance being off Speed Ave (dead end) is concerning

A tall engineered wood tower would be a first for Victoria...

Corvette in Esquimalt is a wood tower, I think, although I don’t know if it’ll use the same construction technique.

Anyone have a rendering?