77 replies to this topic

You beat me by 10 minutes

Too late to correct myself but YoY is actually between Blanshard/Quadra. Haven't been in downtown as of late...

Yes, and the YoY walkway has been closed during construction.

The most recent example of a walkaway bombing is the one built next to the Yello on Yates, connecting Yates with View between Douglas/Blanshard. It was supposed to be open during the day but it's now closed permanently. The walkway led directly into the patios of ground floor apartments so it was bound to fail.

We've been criticizing the CoV for its misguided notions about such walkways since forever. It's crazy how they still can't seem to grasp the fundamentals. Suffice it to say, if the walkways are of the "pleasant commercial lane" variety (like the lane behind the Hudson, or what was planned for Northern Junk) then they have a chance of working. If the walkways are of the "dangerous side alley" variety, then they will not work. It's as if somebody highly placed in the CoV is determined to keep trying to prove that a purpose-built "dangerous side alley" might end up surprising everyone and not be such a terrible misfire after all.

Here's a comment by some SOB on the interwebs about a different purpose-built walkway (circa 2009):

If there's no legitimate reason for folks to use it then I expect it will probably get a gate on it soon enough. A lonely public corridor in that part of town would likely be a magnet for all sorts of undesirable activity.

Victorians love to double-down on their own failures

I'm saying let's not get to crazy with the open space on this lot because the lot next door, the one beside View Towers, that must have an alley of some sort because of the Lunds Auction alleyway easement. So planners have to keep in mind the overall picture.

Right now you can use mid block walkways to go from Pioneer Square on Meares all the way to the Market on Yates.

is millie's lane a roaring success?  can you name on business in there (other than the restaurant aguara or whatever)

is the mid-block walkway between 747 fort and the parking lot/library?

Some more observations about mid-block passages:

The challenge of mid block walkways...

Of crappy ones, anyway.

It's as if the city has advocated for these mid-block passages while never really coming to terms with why they're doing it. What's the point If there are no meaningful standards for the environments within? Shortcuts for the sake of shortcuts?

The passages need to be attractive (dare I say it, "hidden gems") so that they get a regular flow of traffic, so that the user gets rewarded for entering, and so that residential and/or commercial uses might actually be able to succeed within them. I'm making a distinction here between mid-block passages as merely serviceable shortcuts as versus mid-block passages as instruments for enhancing the downtown environment. The "serviceable shortcut" aspect should be way down on the list of concerns. Heck, it shouldn't even be a concern at all.

Era and the Hudson did it right. The passages need to have personality or else they're pointless. If a passage lacks personality then all you've done is accommodated that small number of people who used to cut through the parking lot. Accommodating such people should be a concern for city planners? Give me a break. Anyway, I'll be surprised if these passages on the 800-block aren't duds.

For all of those skeptics out there (myself included) re: purpose-built mid-block connectors, this one (beside Era on Yates) and the lane behind the Hudson show us that they can work. I'm probably stating the obvious but a commercial unit on at least one end that extends well into (and has windows facing onto) the passage seems to be a key ingredient.

I still disagree with the arbitrary insertion of utilitarian little passageways that most people wouldn't dare to use, especially at night. I think the city should be calling for walkways lined with townhomes and cafes and fountains and gardens and such. Appealing mid-block pedestrian streets, as versus rather sinister little shortcuts for those bold enough to take advantage of them (in those rare instances where they actually present an advantage).

is millie's lane a roaring success?

I personally think that this building’s design represents one of the worst proposals to come to the city in recent years. I’m glad that ADP unanimously voted to reject it.

I personally think that this building’s design represents one of the worst proposals to come to the city in recent years. I’m glad that ADP unanimously voted to reject it.

I think that these parcels are going to be sold off to another developer. Sit and hold is not the right strategy downtown at the moment and I don't think the Vancouver owners have enough experience with this council to keep throwing mud at the wall.

Yes, and there are examples here as well (Capital Park, Dockside), but nobody wants mid-block walkways or hidden nooks and crannies anymore which have become enforcement liabilities.

It’s shocking what a few years have done. It really is.


I want them and I think a lot of the public appreciates them.

is millie's lane a roaring success?  can you name on business in there (other than the restaurant aguara or whatever)

is the mid-block walkway between 747 fort and the parking lot/library?

If this is the walkway that comes out by Browns the Florist, I've been using it for thirty years. However, lately I tend to avoid it as there is often someone plonked there on the bench that I would rather avoid, esp. if I'm on my own.

This project got its first substantial redesign since its original submission over a year ago (plans are up on DevTracker); 163 units are planned. 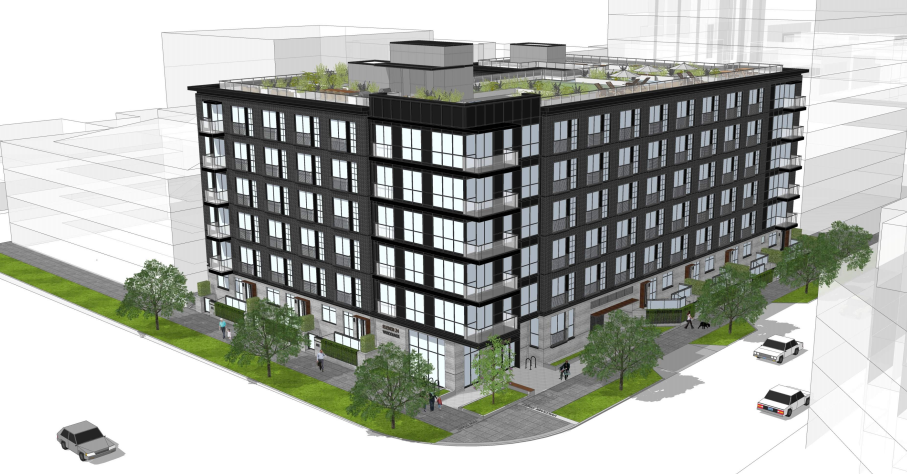 ^ What, no dedicated bike lanes?

They filled in a couple of rows and then draged that little plus in the corner to copy it onto six more rows.

This is going back to DRA CALUC.

This proposal is going to CotW on Thursday, Sept 9.