22 replies to this topic

Canada's quest to qualify for the men's basketball tournament at the 2020 Tokyo Olympics will take place at home.

FIBA announced Friday that Canada will play host to one of the four final Olympic qualifying tournaments. Victoria, B.C., and the Save-On-Foods Memorial Centre will be the site of the six-team tournament which takes place Jun. 23-28, 2020.

The road to Tokyo for the men will see 24 teams compete in four qualifying tournaments of six teams each, with seven teams qualified directly from the recent FIBA Basketball World Cup 2019. 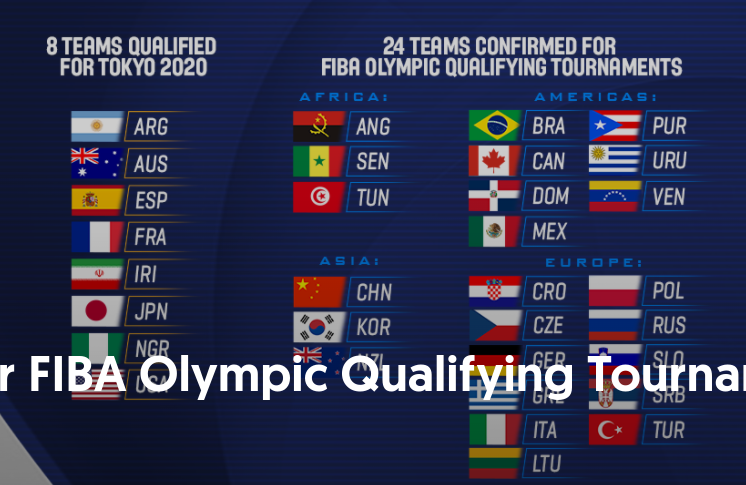 The four remaining places in the 12-team Tokyo 2020 Olympic field are reserved for the winners of each of the four FIBA Olympic Qualifying Tournaments, set to take place on June 23-28, 2020.

The list of teams qualified for the FIBA Olympic Qualifying Tournaments:

The official Draw Ceremony for both the men's and women's FIBA Olympic Qualifying Tournaments will take place at the Patrick Baumann House of Basketball, FIBA headquarters, on November 27, 2019. The draw will divide qualified teams from the five FIBA regions into geographically balanced groups and the ceremony will be livestreamed via the FIBA YouTube channel and also the FIBA Facebook account.

it would be pretty grueling but i wonder if each team will pay a full round-robin.  that would mean 5 games in 6 days.

perhaps it's more likely they will divide into 2 groups/pools of three teams.  so then 2 qualifying games against your pool-mates then a semi-final pair of games and a final.   winning and 2nd-place teams would then play a total of 4 games.

In previous years it's been 2 groups of 3 teams for a round robin.  Top 2 teams in each group continue on to knockout.

In previous years it's been 2 groups of 3 teams for a round robin.  Top 2 teams in each group continue on to knockout.

3 games group a round robin

3 games group b round robin

so at least 9 games for fans to attend.

yes.  apparently there is no 3rd or 4th place games.

Ticket information and schedule will be announced Nov. 27.

This is considered bigger than Victoria hosting the 2007 FIFA U-20 World Cup of soccer at Royal Athletic Park and the 2019 IIHF world junior hockey championship at the Memorial Centre because it is not an Under-20 competition but will feature full national teams.

“Not having to travel overseas for the qualifier and having the home-nation crowd behind them will be huge for our national team,” said Ken Shields, former Canadian national team and University of Victoria coach.

Shields is predicting Canada’s NBA players will play in the qualifier after most passed on the 2019 FIBA World Cup over the summer in China, citing a variety of reasons.

“They have to play,” said Shields.

“They grew up playing basketball here. Their country needs them. All the other teams in the world will have their NBA players.”

Canada has not qualified for the Olympics in men’s basketball since two-time NBA MVP Steve Nash of Victoria captained Canada to Sydney 2000.

“Where is a better place for our team to come to for Olympic qualifying than at the hometown of Steve Nash?” said Shields.

“Our Canadian players will have full access to CARSA at UVic for their training camp. They will be well looked after here.”

The Canadian NBA players won’t play. We might be lucky to get one or two nba scrubs. We’ll definitely be getting one or two Scrubbs

The Canadian NBA players won’t play. We might be lucky to get one or two nba scrubs. We’ll definitely be getting one or two Scrubbs

there's only about 20 canadian players in the nba.  slim pickings anyway.

Contrary to my previous post suggesting that no big names will play, several big names have confirmed they will be playing including Jamal Murray, arguably Canada's best baller:

Also, the draw has now been released, Canada is in Group A with China and Greece (yikes) and if they top their group, will play the winner of Group B (Czech Rep., Turkey, Urugauy) for a spot in the olympics.

Greece will be tough to get past, especially if they have Giannis Antetokounmpo on the roster (last season's NBA MVP for the non-NBA fans).

But how amazing would it be to see Giannis play in Victoria...very cool opportunity.

The Greek Freak will land on Blanshard Street.

Fans can sign up to receive advance information on tickets, pricing, volunteering opportunities and other event details at basketball.ca.

Canada will face Greece and China in Group A, while Uruguay, Czech Republic and Turkey have been drawn into Group B for the Victoria FIBA Olympic qualifying tournament June 23-28 at the Memorial Centre.

The tournament winner will advance to the 2020 Tokyo Olympic Games.

Canada Basketball also announced plans are in the works for a Greater Victoria-wide community cultural festival to run during the Olympic tournament to celebrate the qualifier and the sport of basketball, with details to be announced.

Thanks Victoria Watcher for the link! Really hoping we can get tickets.

Thanks Victoria Watcher for the link! Really hoping we can get tickets.

TICKETS ON SALE FRIDAY, JANUARY 31 FOR VICTORIA FIBA OLYMPIC QUALIFYING TOURNAMENT
Team Canada to face #7 ranked Greece in opening matchup
Canada Basketball announced today that ticket packages for the FIBA Olympic Qualifying Tournaments 2020 hosted in Victoria, B.C. will start at 10:00 am PST on Friday, January 31st. The tournament runs June 23 - June 28 and the winner of the tournament will qualify for the 2020 Tokyo Summer Olympic Games.

The City of Victoria is pegged to spend up to $90,000 to host the International Basketball Federation (FIBA) event this summer.

The money would come out of the city’s contingency fund, and go alongside $1.25 million from the federal government, $350,000 from the province, $750,000 from corporate sponsorship, and an anticipated additional $160,000 from other other municipalities.

According to the report, the estimated economic impact to the city could be $6 million.

Discussions will happen on Thursday morning, with the decision likely to be ratified at city council Thursday night.

The tournament takes place at the Save-On-Foods Memorial Centre from June 23 to June 28.

what if council says no?  what are the chances of that $160k materializing from the other municipalities?  this is a pretty expensive event for a relatively non-basketball community here. $2.7m in government and corporate inputs to generate $6m in activity.  somehow i suspect we were "lucky" enough to get it because places like toronto (nhl nba and concerts) and vancouver (nhl and concerts) could not guarantee the dates in their arenas.

moderators can fix the dates of the thread title here.

Nothing is guaranteed regarding the pandemic, but FIBA is hoping for a semblance of normalcy next year. The world governing body of basketball announced the new dates for the Tokyo Olympic qualifying tournaments scheduled for Victoria, Split in Croatia, Kaunas in Lithuania, and Belgrade in Serbia.

They will be conducted within the period of June 22 and July 4, 2021. The Victoria qualifying tournament, featuring host team Canada, will be played at Save-on-Foods Memorial Centre.

Looks like the official dates are June 29 - July 4, with the Olympic Games held July 23 - August 8

Friends of Basketball Victoria has announced a three-week basketball festival attached to the qualification tournament next summer.

It's being described as the biggest event of its kind in the nation.