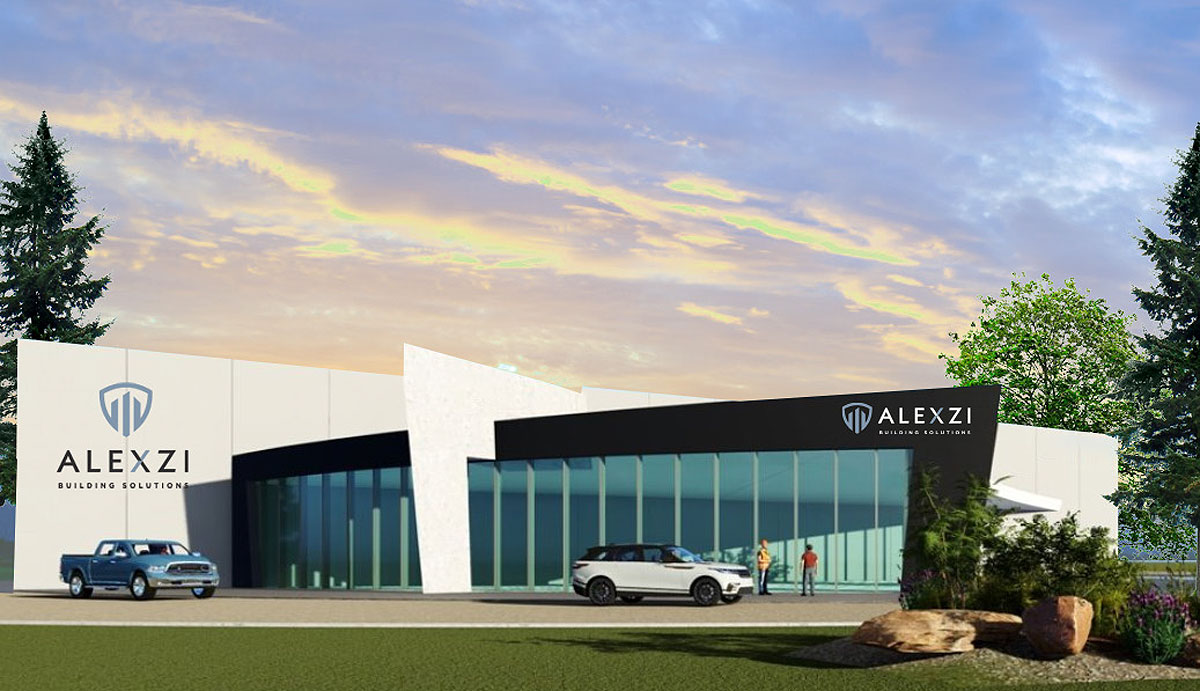 A rendering of an Alexzi Building Solutions manufacturing facility. Alexzi, a Nexii Certified Manufacturer of green building materials, is searching for a site on Vancouver Island capable of accommodating a 150,000 square foot factory.

https://victoria.cit...island-factory/
A BC-based green construction company pioneering environmentally-friendly building technologies has announced plans to open a manufacturing plant on Vancouver Island that could employ up to 200 workers.
Alexzi Building Solutions (Alexzi), has issued a request for information (RFI) to solicit bids from local real-estate developers capable of delivering a state-of-the-art 150,000 square foot industrial complex for the production of Nexii construction materials and panels designed to spec.
The RFI identifies the Capital, Cowichan Valley and Nanaimo regions as suitable locations, with a development window targeting delivery of a production-ready plant by early to mid-2023.
As a Certified Nexii Manufacturer, Alexzi’s plant will be able to provide near-zero waste and significant carbon emission reduction on all projects, compared to traditional steel and concrete construction methods. Precision-designed, pre-manufactured Nexii panels achieve high energy efficiency and use greener materials, significantly reducing climate impacts that buildings and construction have caused for decades. More: https://victoria.cit...island-factory/

is the idea here to get local governments to throw in some incentives?

And former Vancouver Mayor Gregor Robertson is an executive of Nexii, the company Alexzi is certified by to produce its building materials.

A rendering of an Alexzi Building Solutions manufacturing facility. Alexzi, a Nexii Certified Manufacturer of green building materials, is searching for a site on Vancouver Island capable of accommodating a 150,000 square foot factory.

Doesn't seem like Alexzi has much (any) of a track record.

They do not, as they do not yet have a factory in which they can build material. Alexzi is a licensed manufacturer of Nexii and has to build a facility.

^ I realize that, I would just have expected a group with a track record in construction materials to be behind such a large initiative.

can they make these building blocks from bio solids?

a site on Harland would make sense. or anywhere along the sludge pipeline.

Well well well, Marriott will be using Nexii for their new hotel in downtown Nanaimo. Sounds like the parent company has a partnership with Nexii for their other hotel brands, too.

the whole thing sounds like voodoo. look who is involved:


“Buildings and construction are the number one source of climate pollution and municipal waste, but essential to our way of life. We need to ensure that all new construction is smart green construction to keep our planet healthy and livable,” said Gregor Robertson, Nexii’s executive vice president of strategy and partnerships and the former mayor of Vancouver.

I love his milk. Wish I could get the chocolate one here but Sobeys doesn’t seem to carry it regularly.

This is a major game changer.

Can’t glean much from these pictures, but if anyone is interested, the Nexii built Marriott Courtyard in Nanaimo

Thank you! Man, did that every go up fast. Was there any blasting/excavation required for this build (for underground parking)? Or did they start with foundational work then went straight on up?

Nexii has acquired Omicron. This is a major game changer.

In July of 2021, Alexzi issued a Request For Proposal (RFP) which received six quality land options. From there, the team went through a strategic process of narrowing these six landsites down to three. Out of the final three, the team went into deep due diligence on two of the sites. We are now pleased to announce our land partnership!

After much consideration, we are so excited to announce that we have a signed Letter Of Intent (LOI) with Malahat First Nation.

The Malahat Nation represents approximately 357 members with two reserve lands located on the western shore of Saanich Inlet, south of the village of Mill Bay, about 40 kilometres north of Victoria.

Malahat Nation’s Strategic Plan follows the blue-green economy philosophy that encourages improved stewardship of the ocean, groundwater, and waterways, in addition to incorporating strategies to mitigate climate change and adaptation. With the future build-out of their lands, they strive to meet or surpass current and future national standards towards a green economy and infrastructure.

Alexzi and Malahat Nation have an aligned mission to achieve improved well-being of community members, an environment of social equity, and a significant reduction in environmental risks.

Alexzi will have a long-term lease and be the anchor tenant for the Malahat Business Park. Malahat's ambitious growth plans provide a unique opportunity to maximize use of the Nexii product for the development of Alexzi’s manufacturing facility, and for the future phases of the business park, the proposed Malahat Film Studios, tourist attractions, and additional residential and commercial buildings. Malahat is in negotiations with additional high-profile tenants that foster an environment of innovation and symbiotic business.

Malahat Nation and Alexzi are in further discussions about additional economic partnership opportunities with the goal to directly impact and benefit members of the Malahat Nation, supporting Reconciliation in alignment with their community plan. This includes reserving at least 10% of its employee base for Indigenous workers. Alexzi will also create training opportunities for Malahat youth, and workers on the manufacturing process and the assembly of Alexzi's building products.