I have known several alcoholics in my life. There is no way a so-called MAP would have improved their lives. They learned to live quite well without alcohol. Anyone can.

I guess that when you run out of drug addicts to exploit and profit from you have to find additional sources of income. 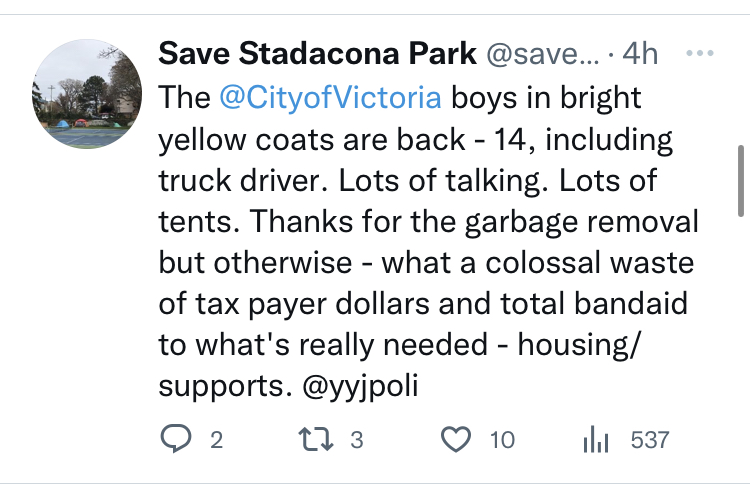 Housing with (alleged) wraparound supports, has been available for years in the CoV. The problem of camping in parks is one of political philosophy and bylaw enforcement, not lack of accommodation.

FB reminded me of the weird little patio thing built in the middle of Cook street near BHP, where the city just reported the centre line into a sort of zig zag, lol. Whatever happened to that? I think it was run by the Red Cedar folks.

Vancouver’s last 2 homeless camps cost the city $6M, the cost of 2 more has yet to be calculated

Is this why they say it's less expensive to house folks?

FB reminded me of the weird little patio thing built in the middle of Cook street near BHP, where the city just reported the centre line into a sort of zig zag, lol. Whatever happened to that? I think it was run by the Red Cedar folks.

It was. The Red Cedar moved its sidewalk patio license to BHP, on Cook Street, due to a loophole in the rules.

It’s long gone, I assume? I don’t get out much.

the city has a similar crew complete with street sweepers and multiple dumpsters in the 900 block of Pandora EVERY NIGHT!   Tax payers are clearly getting excellent value for the money they pour into City hall.  Housing First is an obviously success so, Blinders On and Carry On!

Not surprisingly, the 'coalition' is asking for an extension on the tiny homes mess. 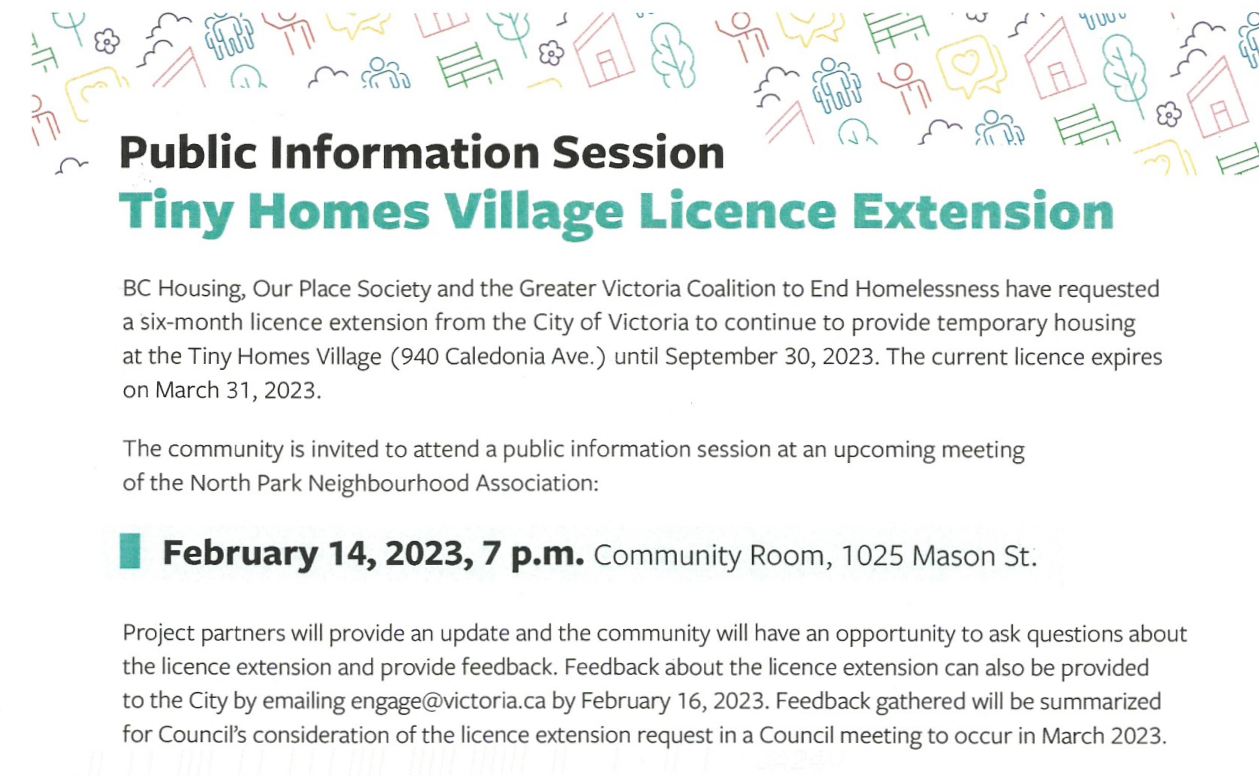 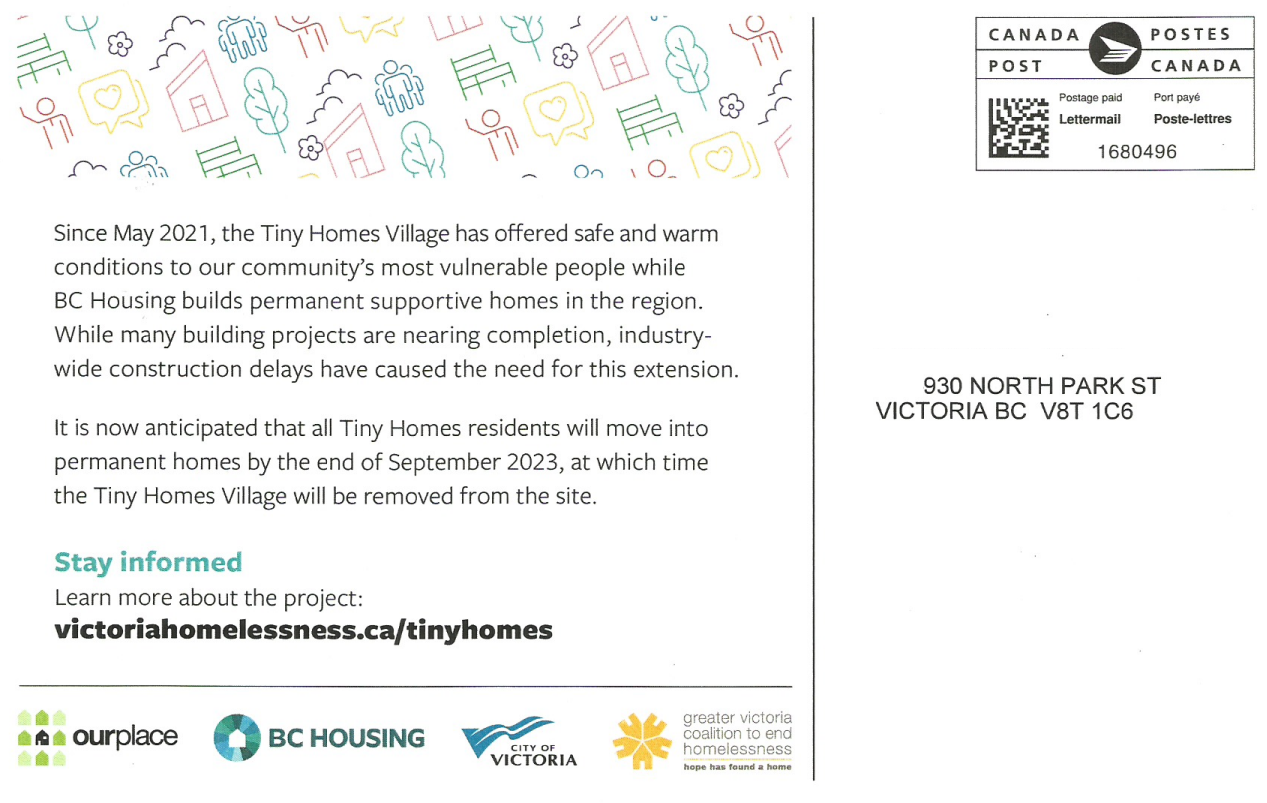 Path out of poverty is productive work

I could not for the life of me imagine that anyone, much less Trevor Hancock, a retired UVic professor of public health, still proclaims as virtue the ideals espoused by Marx and Engels in their Communist Manifesto of 1848. Those ideals are as impractical, unworkable and immoral now as they were in the middle of the 19th century.

While I concur that our convoluted and gerrymandered tax laws allow very wealthy individuals (who make ­DiCaprio’s Wolf of Wall Street look like my maiden aunt) to avoid proper, just and even taxation, the Robin Hood approach to re-distribution of wealth does not fly.

I know of many poor people who are just as rotten to the core, and so do you. Scoundrels abound; it has nothing to do with wealth or lack of it.

As for the efficacy of redistributing all this ill-gotten wealth, Hancock’s supposition that the trillions stolen from the rich to be funnelled to the most deserving poor would lift two billion people out of poverty has no basis in reality.

No, the way to drag a person out of poverty is to enable them to do productive work, plain and simple.

Oh, and if you then steal all the fish he catches, he will leave you, and go somewhere else, leaving you with no fish to steal.

Indeed it would appear Victoria is not doing a count, again this year.

Death at 844 Johnson: 'We both knew this building was going to kill him'

In a video shot by his daughter just before Christmas, Jamaal Johnson said it was impossible for him to fight his addictions while living at 844 Johnson. He was right
Jamaal, who was an alcoholic and a crack-cocaine addict, was devastated when he learned he was going to be transferred there from a temporary shelter created at Save-on-Foods Memorial Centre during the COVID-19 pandemic.

So was his wife, who has been “deep in the building,” and compares it to a kill shelter for dogs.

“They’re shoving them in there, giving them all of the sunshine and roses promises and they’re giving them nothing. Jamaal thought he could get better and then he could go home. But walking in, we both had an instant, heavy dark feeling.”

Jamaal wanted a place where his daughter could visit him safely, a place he could cook ribs for her and watch basketball.

“We both knew this building was going to kill him and it did. I strongly believe that if Jamaal hadn’t been in the building, he’d be alive. One hundred per cent. There’s no doubt in my mind,” Courtney said.

The heroin smoke in the hallways is so intense, it makes you feel dizzy, she said. Support workers reach into their drawers and pass out clean needles or a pipe.

Cool Aid’s medical clinic provides 24 hours a week of nursing and physician time. An Indigenous outreach workers is there 24 hours a week and a pharmacy is open four hours every day.