Mount St. Angela is a proposal for a six-storey seniors residence along the 900-blocks of McClure Street and B... (view full profile)
Learn more about Mount St. Angela on Citified.ca

But then I bailed at midnight so perhaps he explained himself after I left?

Nope, not really. It was a totally bizarro act....

Mount St. Angela redevelopment inches ahead
Under the latest proposal, the height of two new condos would be lowered

A multimillion-dollar redevelopment of historic Mount St. Angela may hinge on the view from the veranda of an old house.

Victoria council allowed a development on the one-acre site at 923 Burdett Ave. to lurch partially forward through a rezoning approval process on Thursday. But a divided council stopped shy of giving a full nod to the project when Mayor Alan Lowe, holding the deciding vote, said he didn't want a house at 924 McClure St. -- part of the same parcel -- to be relocated from its south-facing viewpoint to a northern one.

That would appease them?

Well, on the bright side - the project might founder, the property become derelict for 10 or 20 years, and then one day a new project might be put forward with density suitable for so close to the core, in a different political atmosphere that would support something extremely high quality. Hopefully the heritage structures will still be in good enough condition to restore by then.

So why is the house more important than the apartments? (the house they want to move, I mean)

Perhaps the Isherwood family will revise their proposal to simply add more additions on the back of the "apartment" building. I envision ever increasing boxy slabs added on, every 10 years or so, each being a poorer version of the original building. Eventually they can construct a bridge over McClure street as needed....oh and lots of surface parking since this will negate any need for blasting.

The development of Victoria's historic Mount St. Angela site has been given the go-ahead, much to the disappointment of many heritage advocates and nearby residents.

Mayor Alan Lowe and Coun. Pam Madoff voted against the project at 923 Burdett Ave., which will see the historic Mount St. Angela building preserved and converted into a facility for low-income senior women. In addition, two heritage buildings will be relocated from neighbouring McClure Street to Burdett, and two condominium buildings are to be built on the remainder of the parcel.

There may be action on the site as soon as the next two months as things are put into gear. There's still no takers for the old yellow house if anyone wants it.

The most vulnerable are not usually the first people in the community to benefit when housing markets start to slide.

But thanks to one Victoria developer, 31 people living with mental illness or recovering from addictions have a new home to start the new year.

But after a rezoning was granted last February, Isherwood had a change of plans.

“Once I could sense the financial turmoil starting in the world and knowing the trouble the city was having with lack of shelter and being an apartment builder … I decided it would be better for everybody to let some people have the advantage of living in a quality building in just a super location,” he said.

Isherwood was born on the property in 1942, when his parents owned it and ran a hotel in the former college and its 1912 addition. His mother sold it in 1958 to the Sisters of St. Ann, who used it as a convent for almost 50 years before selling it back to Isherwood in 2006.

When Isherwood’s redevelopment plans fell through – they would have seen the addition torn down – he turned to the Capital Region Housing Action Team to offer the property for use.

Within two hours, Isherwood and action team directors Henry Kamphoff and Jim Bennett had a plan. The house and the addition were made available to the Vancouver Island Health Authority to house some of its clients.

The new spaces will help the homeless indirectly by freeing up rooms in other VIHA supportive housing facilities.

The availability of the building couldn’t have come at a better time, Johnson said, as VIHA was faced with losing 15 spaces for the mentally ill after leases on two other properties were not being renewed due to the owners’ redevelopment plans.

Those 15 clients, and the contracted care staff who were working with them, have moved to Mount St. Angela.

Plans are in the works for a possible rental apartment building on what is now open grass on the property’s southeast corner.

As it stands, the project is “not even a break-even,” Isherwood said.

Isherwood also owns a fairly large 4 storey rental building in James Bay, which has an underused parkade. He is proposing to build rental housing on the spot where the parkade is and is hoping to partner with BC Housing in order to make it available to low income people. It is a great idea and I am looking forward to the presentation at the Jan. 14 JBNA meeting.

It was interesting to learn that the tenants at this building only use 50% of the parking spots available at the building - proof that where public transit and easy access to downtown is available, parking requirements can be relaxed.....

Did we already see this? (from Hallmark Society Newsletter - Spring 2007)

It may be argued that developers have already ruined the Burdett streetscape with the dense towers currently being constructed at Burdett/Vancouver/McClure. But if we concede defeat every time that happens, then we might has well throw in the towel entirely.

Right. It may be argued that the Chelsea ruined the Burdett streetscape. Dense towers. Eyesore.

Correction: It may not be argued that Chelsea ruined the Burdett streetscape, because to offer such an argument would be nonsensical and inane. Nor may it be argued that the lowrise Chelsea = "dense towers": 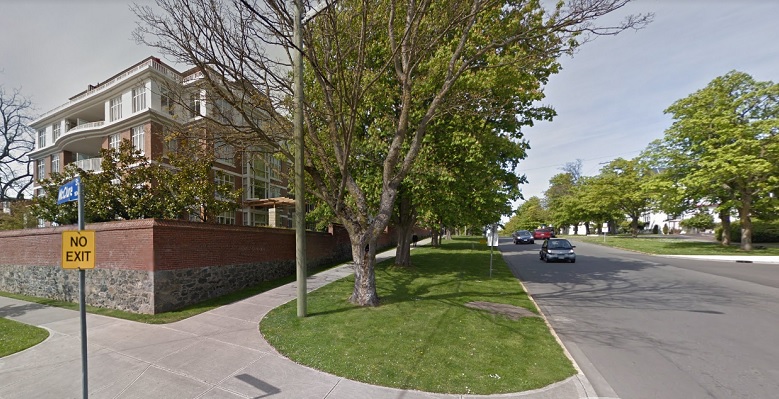 Perhaps the nicest addition to that area of town in 20 - 30 years.

Twice that long, at least.

The Chelsea replaced a grim, old concrete bunker of a hospital.

And it ruined the Burdett streetscape in the process, apparently.

The Chelsea is beautiful and adds value to those streets.

"It may be argued that developers have already ruined the Burdett streetscape with the dense towers currently being constructed at Burdett/Vancouver/McClure..."??

Is the author blind? Or crazy? What is he selling - Gonzo heritage marketing? (Gonzo rhetoric?)

Dense? Towers? Jesus everything is some huge 50 story LUXURY condo TOWER to these people.

There's a new proposal for this site.

Nice to see something happening here. Do you have a source we can cite for the update?