Are we sure it’s above market value? The condos next door are selling for around $600k for that size range.

Are we sure it’s above market value? The condos next door are selling for around $600k for that size range.

In my defense I said arguable

“It typically costs over $1,500 a month to rent a one-bedroom apartment in Saanich, if you can even find one. That’s simply out of reach for the majority of single people in this municipality,” says Ethan Dennett a steering committee member of the Victoria Tenant Action Group.

a couple issues with that statement.

is it really out of reach for "the majority of single people in this municipality"?

but even if it is, then single people in this municipality will have to do what others have done for generations - live with others or family.

one person per 1-bedroom home is quite aspirational but not likely in this market.

one-bedroom apartment in Saanich, if you can even find one.

one more issue with the statement:  if it's so unaffordable go figure why is so hard to find one.

hey go to oak bay the other side of uvic and camosun and try to find one for that price.

The "Berkley Apartments" is a positive cash-flow producing multi-family rental apartment building centrally located in one of the strongest residential rental markets in Canada. The property is found in the beautiful and upscale neighbourhood of Fairfield. The building has been well maintained and undergone a number of capital expenditures including new exterior windows, common area carpets, and updated suite washrooms. The building features full height storage lockers and laundry room, with parking in the rear. It is 3 storeys, with 17 suites, including one bachelor, 6 one-bedroom, and 10 two-bedroom suites. Clean Phase II Environmental. Clients and agents need to sign the CA for further info.

This strip of Cook Street is prime for redevelopment of new 5-6 floor apartment buildings.

Ive spent some time in that home as family friends own it. It’s quite the thing, and you feel like you’re in a castle. Once upon a time it was mostly an SFD or used as such, anyways. Now I see it has 11 suites.

Oh! A friend of mine lives in the suite with the large deck (second picture). It’s so beautiful! I love that house.

Not doubting him, but it can get a bit tiresome.

conveniently he already has a rubber stamp with that message on it.

For those who have had to miss rent payments during the pandemic, the province has released a framework on how and when that money will be paid to landlords. The eviction freeze that has been in place since March will be lifted on Sept. 1, after which renters will have until July 2021 to repay outstanding rent from before Sept. 1. Landlords must present their tenants with a repayment plan in September and give them at least 30 days of notice before the first payment is expected. The plan should include the full amount of rent owed, the amount the renter is expected to pay back every month, and the date the first payment is due. Conventional annual rent increases, however, will remain banned until December. According to a news release, 97% of BC renters were still paying at least some rent throughout the pandemic, with 85% paying in full.

During the state of emergency, 97% of renters continued to pay rent – with 85% of renters paying in full and another 12% making partial payments.

so 15% of renters have stopped paying some rent.  so if they have paid nothing since march (no rent paid for april/may/june/july/august) will they be keen to repay 5 months rent or will there be a big shift of people just vacating and then renting elsewhere?

What we're going to see is six months of pent-up relocation demand suddenly surging come September. This fall is going to an exceptionally wild market, so if you're looking for a new apartment or plan to move, try to get everything sorted before September.

seems not bad for a 6-unit building.

The seller has had a professional appraisal done by commercial appraiser D.R. Coell & Associates to determine market value. The appraisal has come back at $1,650,000. Seller is motivated to sell and is encouraging offers. This is a great opportunity to purchase at less than appraised value! This 6 unit revenue property grosses $99,960/year with a 3.8% Cap Rate. Built in 1907 by Richard. F Stephens who operated a close by boatyard, this property overlooks Selkirk waterway.

Rent increases have been banned till next year? I did an increase in February thankfully. Does that mean I could do another next February?

Cloak said as many as 4,700 rental units are either under construction or in the planning and approval process, and developers bringing buildings to market want to ensure they are filled to stabilize revenue projections.

It’s a different story in the core areas of Victoria, Saanich and Oak Bay, where pent-up demand has meant that the rental vacancy rate has climbed only slightly as demand from students drops.

Though details have yet to be worked out, the University of Victoria intends to offer most courses online this fall, though it will still offer 800 spots in on-campus housing.

Normally, UVic has 2,150 beds available on campus, but due to social-distancing rules, that is being greatly reduced. The school also lost 162 beds when two residences were demolished to make way for a new student-housing project that will eventually add 782 suites.

According to the university, the 800 units being offered this fall will be used for international students who live in Canada year-round and some students returning to campus to finish their degrees.

Royal Roads University has indicated it will offer all courses online until at least the end of this year, while Camosun College says it will offer most of its curriculum online, while some trades training will be done in person due to the size of the classrooms and shops being used.

With fewer students in the rental market, Victoria’s vacancy rate, which has hovered below two per cent for the last several years, climbed to an estimated two per cent to 2.5 per cent, according to the large rental companies, with many of the units vacated by students being snapped up.

Cloak is only off by several thousand units, as in 9,000-units short. The TC could just talk with the guy who actually has his finger on the pulse, but I digress

Ever since I turned off the unit count on Citified’s data portal they’re having trouble keeping up.

Vic West Revenue Fourplex! This is a great offering for an investor or someone wanting to live in one suite and have the others pay their mortgage. Offering 3 x 1 bedroom suites and 1 x 2-bedroom suite that have been well maintained over the years. Each unit has its own laundry and separate storage with ample parking. Outside is a private hedged backyard with each suite having easy access, a new sun drenched south facing deck featuring some ocean views. 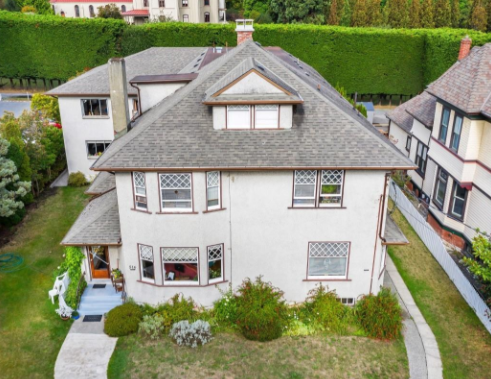