^ I think the majority in that age range get their news in text form, rather than watching videos. I also suspect most of that news comes from news aggregation sites - such as Google news - or from social media, so whichever results pop up first are the ones getting the clicks. If there is a video, it may or may not get watched, depending on atmosphere - mobile devices are likely the most common way of getting the news now, and often, sound is something people want when getting the news now, as they're commuting or on the crapper.

I note in the most recent TV ratings in Canada not one of the Top 30 programs is CBC. Not one.

The only time CBC places in the top 10 anymore is when Hockey Night in Canada airs. Even at that its flagship viewing numbers are well off its heyday as a percentage of the viewing public from 30-40 years ago. Beyond that, most folks could care less about CBC shows and they clearly aren’t going to watch the fake news, Trudeau puff and SJW opinion pieces masquerading as “news” on The National.

We don’t need to be paying taxes for a state broadcaster that’s little more than the Liberal Party’s propaganda wing. If I were PM, here’s what I’d do with the CBC:

However with the explosion in the 1970’s of cable media, and now the exponential growth of online news media content and variety, there is no longer a need IMO to provide a taxpayer funded, wallet-sucking media black hole that the CBC has become.

As It Happens. My favourite radio.
Well done tonight.

Advertising revenues for CBC TV’s English programming continued their downward trend last year, and less than 1% of the country watched its local dinnertime newscasts, according to Blacklock’s Reporter.

“There is continued risk that our organization will not remain sustainable as we anticipate the Canadian conventional television advertising market will remain under pressure and the media industry will continue to be disrupted,” wrote management. “In addition, we do not receive inflation funding on the goods and services portion of our budget.”

Veteran reporter Lisa Cordasco, who retired from CBC radio five years ago, has resurfaced as reporter and news director at CHLY FM Nanaimo.

Not one, not a - single - headline on the CBC’s mobile version of its news portal references the calamity that is Canadian federal politics at the moment. Not one.

But the first four headlines - four! - are devoted to Biden and US politics.

The next 15 deal with fires in California, the Conservative leadership race, license plates in Ontario, and so on.

So, this just happened. 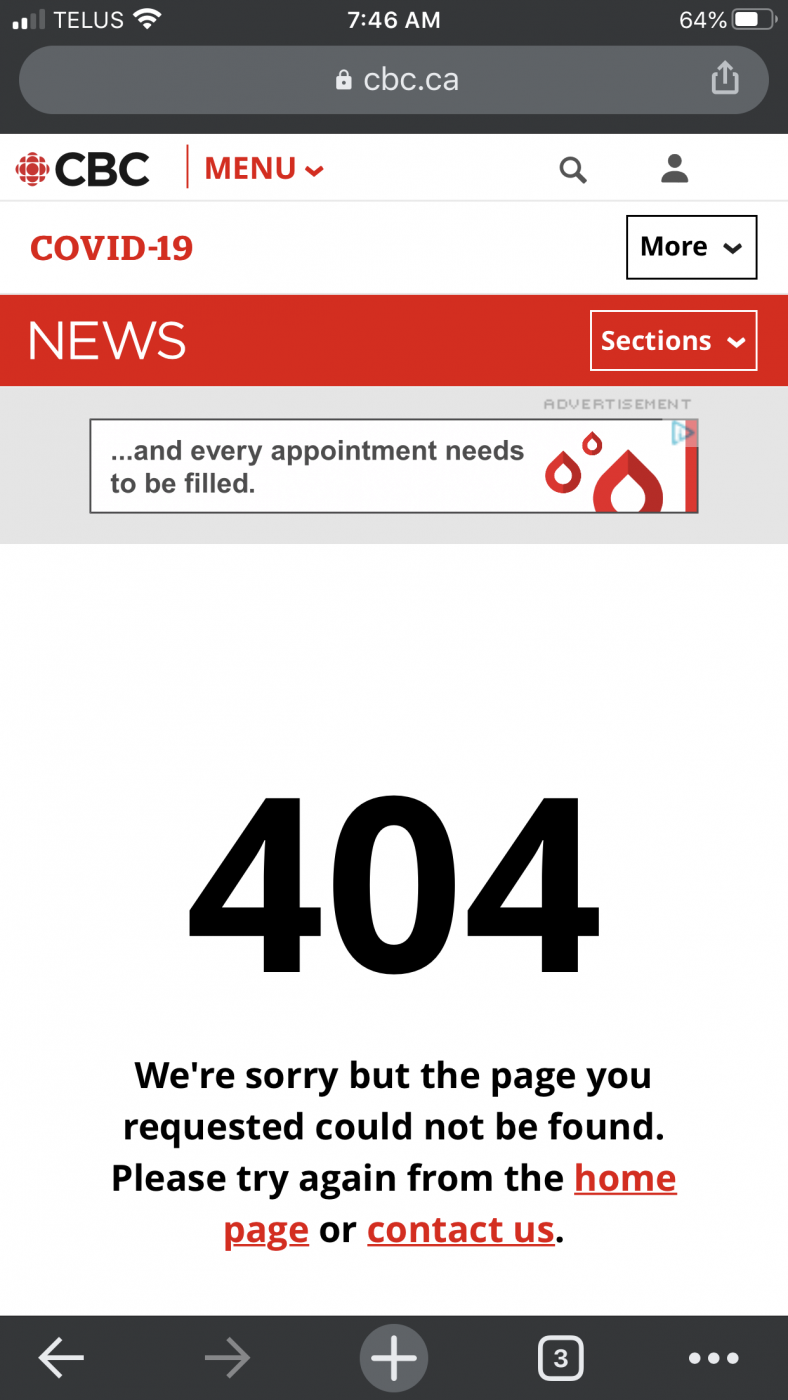 What we have is Rosie Barton and JTTV/CBC.

" I think the country absolutely needs the CBC. Do they need the CBC they’ve got right now? Probably not. They need it to be better.”

I'm very pro-CBC and public broadcasting in general and really like Gregor Craigie, but goddamn if every. single. morning. is the same thing. Covid, FN issues and overdose crises are super important issues...but holy shitballs find something else to report on. Anything. Please. I can't do it anymore. The format is literally:

Third segment: Hey you've heard about COVID and homelessness and First Nations, but have you heard about the plight of the homeless drug-addicted First Nations people who are hesitant to be vaccinated against COVID, or who have COVID? Or are at risk of getting COVID?

DO. SOMETHING. ELSE. Anything else. Please, for the love of God.

^I'm the exact opposite, I never watch CBC. I also PVR all my news and I must say the fast forward button is getting worn out from exactly the same topics you describe.

Life's a journey......so roll down the window and enjoy the breeze.
Back to Print, Televised and Radio Media