Aldrich is done. He was convicted of sexual assault in 2013 when he worked as a high-school hockey coach in Michigan.

Done coaching hockey perhaps, but he operates a glass etching company that relies on recruiting university and college aged interns.

he's taken nearly 12 year to bring the civil case.  why the delay?

He suffered from sexual assault trauma while feeling alone and depressed, struggling to cope for years on end. All of which is quite common for sexual assault survivors to go through. Many sexual assualt survivors never summon the ability to bring forward a case. He talked about how only recently he learned of Aldrich's criminal conviction after talking about his assualt with a teammate and deciding to Google Aldrich's name. When he realized what had been permitted to happen to teenage player he decided he needed to take action to ensure this wouldn't happen to anyone else.

He suffered from sexual assault trauma while feeling alone and depressed, struggling to cope for years on end. All of which is quite common for sexual assault survivors to go through. Many sexual assualt survivors never summon the ability to bring forward a case. He talked about how only recently he learned of Aldrich's criminal conviction after talking about his assualt with a teammate and deciding to Google Aldrich's name. When he realized what had been permitted to happen to teenage player he decided he needed to take action to ensure this wouldn't happen to anyone else.

any indication why a criminal case is not pending?

Quenneville was coach of the Blackhawks in 2010 when the alleged abuse took place.

The Stanley Cup is the size of a toddler but so much older. It has been handed out to championship hockey teams since 1893 and to the top club in the NHL since 1926.

One of the greatest joys for any player is to have his name engraved on the trophy, which has happened every year since 1925 when the Victoria Cougars of the Western Canada Hockey League defeated the Montreal Canadiens of the NHL.

To this point, 3,385 names have been etched on the Stanley Cup over the past 96 years, but only one – Basil Pocklington – has been removed. He was the father of Peter Pocklington, the maverick owner of the Edmonton Oilers, but had nothing to do with the team.

It’s going to be a rather short rostered cup once they start removing names.

It’s going to be a rather short rostered cup once they start removing names.

rob ramage and craig mctavish both killed people.  they are still on the cup.

Well, the good news is they may not need as large a cup going forward.

Anaheim Ducks executive vice president and general manager Bob Murray has resigned from his post and will enter an alcohol abuse program, the team announced Wednesday.

The news comes one day after Murray was placed on administrative leave due to “an ongoing investigation related to professional conduct.”

Multiple league and team sources tell Daily Faceoff that Murray is under investigation for allegations of creating a toxic workplace environment by way of his repeated verbal abuse and harassment of Ducks players, coaches and personnel, plus his intimidation tactics and temper tantrums that fostered a culture of fear throughout the organization.

“Working for Bob Murray was pure daily mental warfare,” one source said. “The abuse was endless. Crazy text messages to players and staff berating them for their performance and threats of job security happened with regularity. These weren’t one-time slip-ups or mistakes. These were regular explosions and eruptions.”

It is unclear how or why Murray’s behavior went unchecked for so long, given that so many people associated with the Ducks organization bore witness to it. This season marks Murray’s 45th consecutive year in the NHL; Murray was promoted to Ducks GM on Nov. 12, 2008.

Kane's 21-game suspension for submitting a fake vaccination card ended on Sunday and his agent Dan Milstein said the 30-year-old winger would report to the AHL if he cleared waivers.

“Over the past few weeks, we have been discussing Evander’s return to San Jose,” Milstein said Sunday in a statement. “We were not surprised by the Sharks’ decision to put him on waivers and, if he does clear, he will report to the Barracuda. Evander is looking forward to resuming his NHL career this season.”

Kane is three seasons into a $49 million, seven-year contract. He’s with his third organization after being drafted by and debuting with Atlanta/Winnipeg, and a stint in Buffalo.

In the filing, Anna Kane claimed that Evander Kane violently forced her to have oral sex with him in March 2019 after a funeral for the former couple’s daughter, who died after she was born more than two months premature.

Days later, Anna Kane wrote, “Evander again forced me, against my will, to have sexual intercourse with him even though I had not healed.”

The filing says that when she protested, Evander said, “you can’t rape your wife.”

The Vancouver Canucks have donated $250,000 to Princeton flood victims.

The generous contribution to the Princeton Flood Relief Fund was announced Monday, Nov. 29, by the Community Foundation of South Okanagan Similkameen (CFSO).

The dollars are drawn from the proceeds of two 50/50 raffle draws at recent home games.

I liked many of the moves in the off-season, but they have not panned out yet. It is time for a fresh start at the top.

I guess doing worse than Kraken is embarrassing.

Word is they are looking at Marc Bergevin to replace Benning: as a Habs fan since 1965 I would throw up in my mouth if the Canucks hire that dufus. He and Trevor Timmins between them are collectively responsible for the sad sack state of the Canadiens today. They completely trashed that franchise for at least the next 4-5 years. The Canucks need to stay way WAY away from that guy....

Ewwww. I sure hope not

Being named the team’s president is a special opportunity, he said, but one that comes with its fair share of challenges.

“I like stress, especially at my age,” the 72-year-old joked on Monday.

Rutherford was named president of the Canucks (12-15-2) on Thursday, days after the club fired head coach Travis Green and number of front-office staff, including general manager Jim Benning.

IMO Rutherford was a good hire, he wins championships and he's definitely not afraid to make big trades if he feels one is required to shake up the team. After the Benning-Green debacle I think the Rutherford-Boudreau tandem is an excellent one.

An unusual promotional stunt at a hockey game in South Dakota saw a group of schoolteachers competing for a pile of cash by scrambling on their hands and knees to grab fistfuls of dollar bills.

The inaugural "Dash for Cash" event at Saturday's Sioux Falls Stampede junior hockey game featured 10 local teachers on a rug at center ice, scooping up $5,000 in donated $1 bills and stuffing them into their shirts and pockets. The promotion encouraged teachers to collect as much money as they could to help fund their classroom projects. 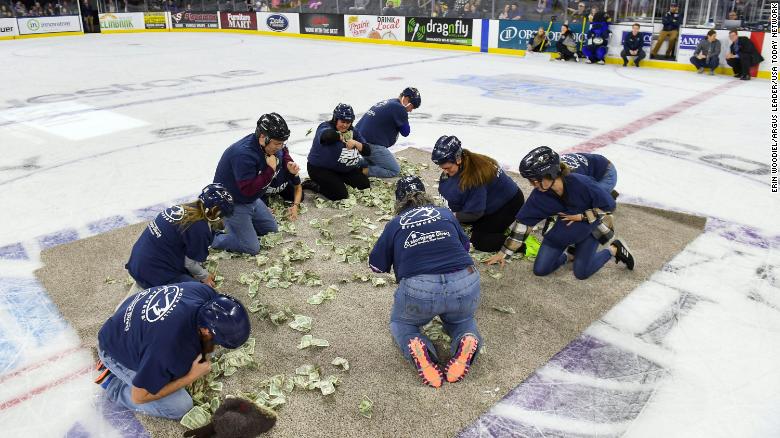 Then came the backlash.
Video of the teachers jostling to grab dollar bills has sparked outrage nationwide, with some critics saying the stunt turned schoolteachers' chronic funding shortages into a public spectacle. Others have compared it to "Squid Game," the South Korean TV series about desperate people who compete in deadly children's games to win money.
https://www.cnn.com/...-cec/index.html

Many teams are currently missing players from their lineups as a consequence of the virus; therefore starting Saturday Ontario is restricting any sports venue with a capacity over 1000 seats - meaning the Air Canada Center, home of the Maple Leafs - to 50% capacity. Sounds like other provinces including BC are seriously looking at that option as well. The Canucks currently have four players undergoing the quarantine protocol.

Almost 20% of Quebec cases linked to Omicron, new analysis finds. Hospitalizations could more than double by Jan. 8 due to new variant, according to fresh projections.