Also, humankind's impact on nature is overwhelming & devastating, but also trivial & fully reversible over the span of just a few weeks. Even though our modern civilization has never produced more unnecessary waste or been more inefficient with energy usage than during those same few weeks.

Also also, birds are deterred by people*, UNLESS the people happen to be surveyors working for Birds Canada. Those surveyors can visit a sensitive site much more frequently than they normally would and it won't have any negative impacts.

*this is why people never see birds anywhere, because the birds were deterred

More birds are flocking to Esquimalt Lagoon since the pandemic first began.

According to five recent surveys conducted by Birds Canada, the double-crested Cormorant, Rhinocerious Auklet and Pied-billed Grebe all saw increases of more than 200 per cent in the Esquimalt Lagoon/Outer Beach area. For the first time in the past 10 years, killdeer birds were spotted in the Outer Beach area, the part facing towards the ocean from Ocean Boulevard.

Notably, the Great Blue Heron was spotted during all five surveys and there were 10 individuals at a single time versus a maximum of three in the past 10 years.

“A lot of people have been surprised to hear about the [increase of] herons cause they’re an at-risk species on the coast of B.C.,” said Graham Sorensen, BC Projects Coordinator. “Any benefits to their survival is an important thing.”

Sorenson suggests that perhaps the reason why birds like the mallard have been showing up in fewer numbers is due to less humans contact as they’ve been accustomed to being fed.

“Traffic is less likely to deter birds from coming to an area versus people that are using the areas,” said Sorenson.

Birds Canada is looking for more intermediate to expert birders to help survey areas including the Esquimalt Lagoon and throughout the Greater Victoria area. There are also other programs that are suitable to birders of any skill level.

it would be quite newsworthy if they released him WITH life threatening injuries. but then they did just launch that hospital at home program.


A 36-year-old man has been released from hospital with non-life threatening injuries after being bitten by a grizzly bear near Pemberton Friday (Sept. 11).

The Conservation Officer Service said the man was hiking in a group of three along the North Creek Trail, a remote site near Pemberton.

“The 36-year-old man had been hiking slightly ahead of the group when he spotted a bear cub and was suddenly attacked by a sow grizzly. The grizzly bit his leg and hand,” the agency said in a statement.

Conservation officers said that because the bear acted defensively, there won’t be any action taken.

hopefully they warned the grizzly she could be subject to a fine next time at least.

How a roadside zoo unleashed a lizard invasion on Victoria

Some people are terrified of the lizards. They can't eat that many honey bees?

"Via a thorough probe, Capital Daily has traced the origin of one of Vancouver Islands’ most notorious invasive species to a single roadside attraction that has been closed for more than 50 years."

Saanich police and conservation officers were called to a property in the 4700-block of West Saanich Road after a bear killed a llama. Officers saw the bear run from the area and it could not be located.

Saanich police spokesman Const. Markus Anastasiades said it’s believed the bear is not frightened by humans. Police warned Monday that the bear could return to the area overnight and advised people to protect any livestock or pets.

and not frightened by llamas apparently.  although might hold some type of a grudge against them.

...and not frightened by llamas apparently.

But in the bear's defense (bears are notorious for requiring someone else to defend them) why should a Vancouver Island black bear understand an Andean llama? That's like saying a whale should understand a desert tarantula.

...it’s believed the bear is not frightened by humans.

In other news, it is believed the shark is not frightened by clownfish.

now this is bugging me a bit.

officers saw the bear run from the area but are they sure it killed the llama?

Richard Kimble ran from the area but in the end it turned out he didn’t kill his wife.

In the original TV series didn't a bear kill his wife?

now this is bugging me a bit.

officers saw the bear run from the area but are they sure it killed the llama?

Richard Kimble ran from the area but in the end it turned out he didn’t kill his wife.

Witnesses said the llama was wearing a bell around its neck. The bear head-butted the llama and people heard the bell. Ram a llama ding-dong.

...it’s believed the bear is not frightened by humans.

No doubt it's the bear himself who's been spreading this misinformation. That bear is a coward. That's why the bear didn't defend Kimble's wife in the original TV series. It all makes sense now.

(It's still far and away the most unsatisfying conclusion in the history of serial television, but at least it all makes sense now.)

We got a bunch of habituate rats possibly because of a chicken coop nearby(can’t blame them I was thinking about getting one myself) possibly other stuff but never had this big problem also rumours of somebody feeding them. Hired a professional to take care of the problem really poison is the only way to take care of a large rat population. The problem was getting so large probably weeks or months away from getting into the house unfortunately never seen an owl in my yard they simply wouldn’t be able to keep up. Unfortunately when faced with a potential infestation inside the decision was simple.

After two years and the chicken coop gone we had them remove the poison boxes no rats for a while now and loving it.

Very worried about the municipal facilities in Oak Bay guess they will find out maybe not today or tomorrow but... Health inspector might not be impressed. https://www.vicnews....-of-rat-poison/

^By the way I have found high power dance club quality strobe lights with a motion sensor at floor level very effective. 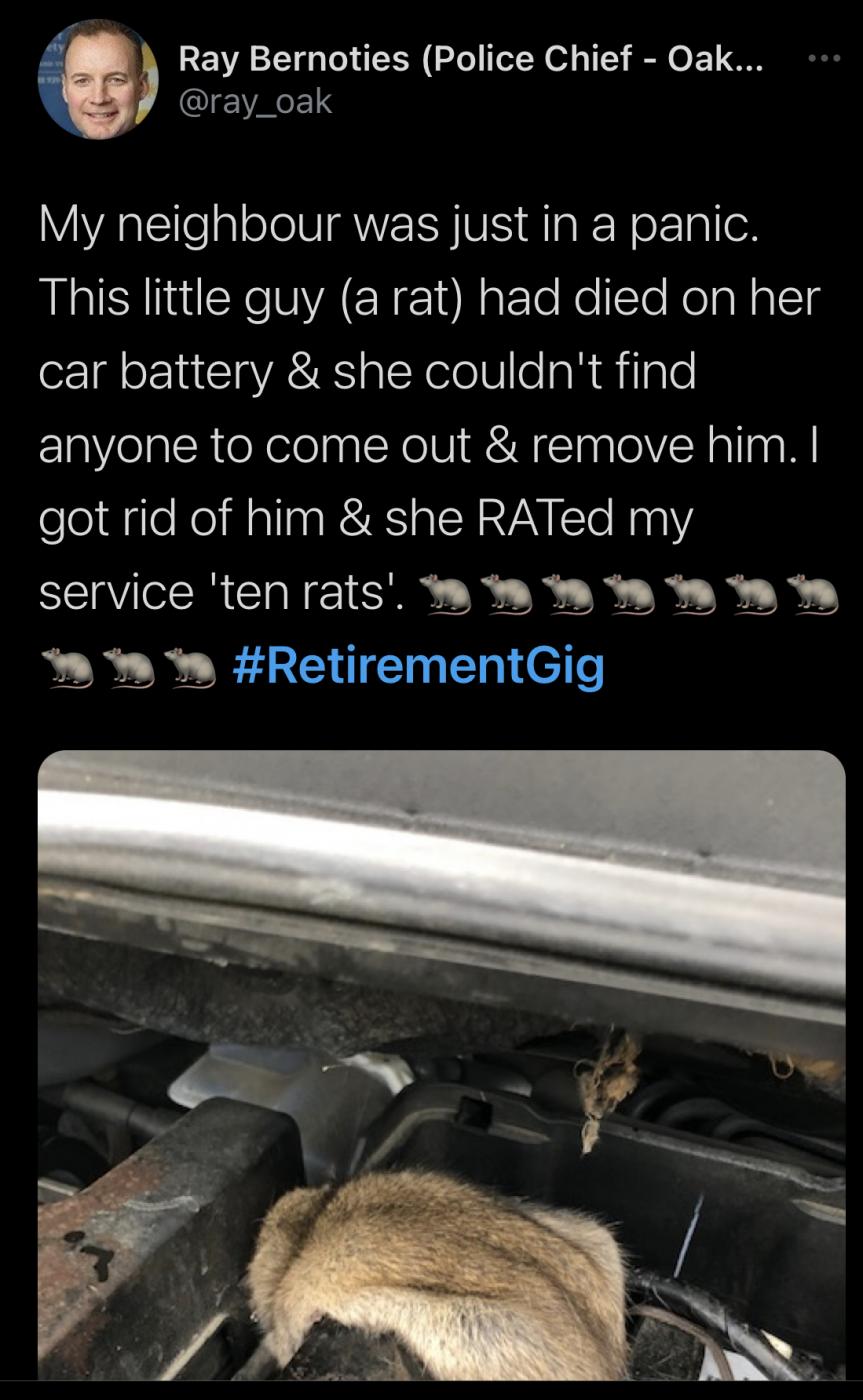 "come out and remove him"?

use the dog-poop inside-out bag technique.