657 replies to this topic

There is a two storey office building on the Pandora lot, and the lot between the two buildings is surface parking. Certainly its not a wonderful use, but its no worse than a car dealership.

If anything, I think Cook would be a great street to have more highrises along, with the Mazda lot and the Dodge lot being the prime locations for a nice set of high density developments. Close to Harris Green, North Park, and not that far from CSV and the park? Its a great part of town.

It's a perfect example of how a slimmer 14- or 15-story building would present a much better situation for all concerned. The podium could still fill out the lot at 2 or 3 stories, but the tower could be set back from Cook Street so as to not crowd the units on the northeast corner of the Mondrian, and also to take advantage of the gap along Johnson Street (which I'm suggesting could/should be left empty as some sort of semi-public space, or otherwise filled in with 3 or 4 stories at most).

To me this sounds very reasonable. Filling every square inch with 10-story fatscraper makes no sense when the rest of downtown's density is so low.

I just can't see the Mazda dealership going anywhere soon, nor Chrysler. If there had been interest, a developer could have tried for the former BMW/Mini dealership property at the southeast corner of Yates and Cook. But it's now an Audi dealership. If you have a profitable dealership, there's no big incentive to sell your downtown property.

The thing that bugs me about the Pandora building is that it's tall (13 stories, which is taller than allowed there, right?) but it's also very wide, filling out the entire lot. What's the justification for that? It's a perfect example of how a slimmer 14- or 15-story building would present a much better situation for all concerned. The podium could still fill out the lot at 2 or 3 stories, but the tower could be set back from Cook Street so as to not crowd the units on the northeast corner of the Mondrian, and also to take advantage of the gap along Johnson Street (which I'm suggesting could/should be left empty as some sort of semi-public space, or otherwise filled in with 3 or 4 stories at most).

Failing that, then maybe 6 or 7 stories on the Pandora side, filling out the entire lot, but with a decent setback on the top floor. Still not a good situation for the lower units in the neighbouring buildings, but folks in the higher units shouldn't have too much of a problem with something like that.

The height indicated here is allowed under the new downtown plan. In fact encouraged in this lot. This area is also included specifically in the density bonus offering so that means that the density indicated here is also allowed so long as they meet the city's request for compensation. This was all detailed in the posts I put up last week. This also indicated what kinds of buildings were allowed under this zoning.

I like the Pandora side I think it would be nice especially when you consider it is North of the Mondrian. What sort of look will that side of the Mondrian have anyways. Have we seen a picture? The Johnson building should not be built in my opinion and should be chopped down to 4 storeys. I doubt that there would be enough in a 6-7 storey building for a developer to think it worth while. I would think if they were going to go slimmer assuming that they lose density on Johnson then they would likely have to go to 16 storeys at least to maintain any profit.

Page 51a shows some of the density forms including one at the 5.5:1 FSR.

I guess I'm having trouble seeing how this 14 storey building is 5.5:1. By my math that means only 40% of the property is covered. This looks a lot closer to 75% or so. But maybe I don't understand what FSR means.

which sounds appropriate to me. Not being met in this proposal. 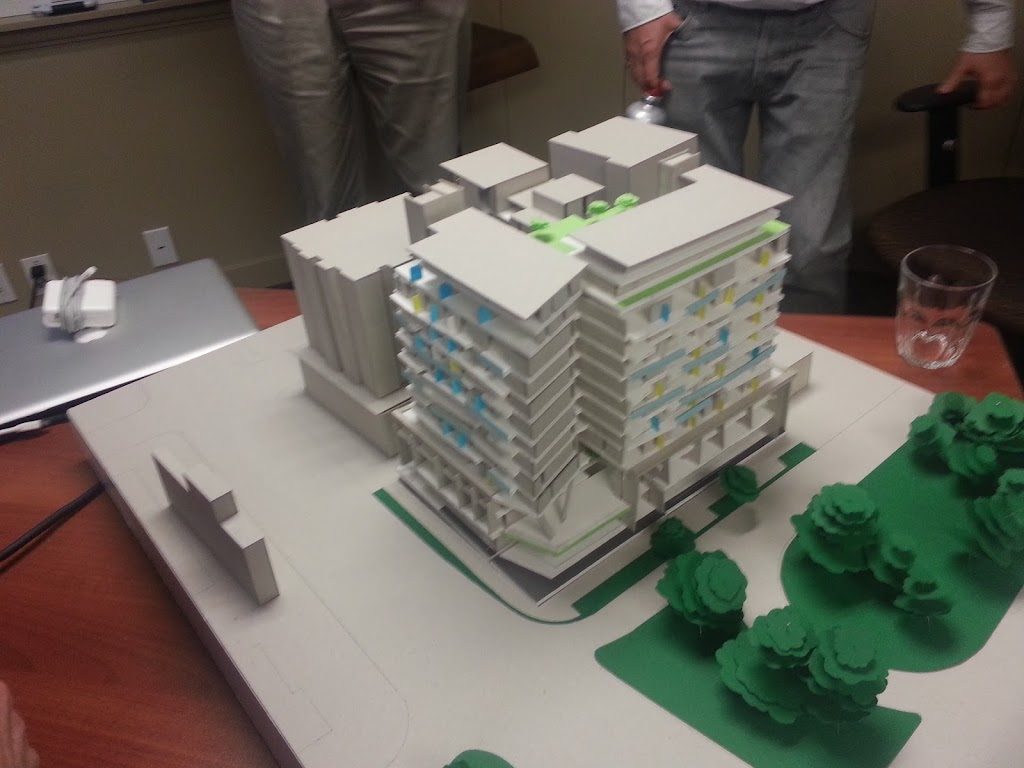 If you look at the density bit of the plan there is a good description of how FSR works. Basically if you have a 100 sqft of property to lot line at 5.5:1 FSR you can build 550 sqft of floor space. You can do that over 10 storeys or 100. The taller you go the slimmer the building will be. In this case that triangular cut out would reduce the FSR a lot as would the fact that most of the floors to not extend to the Southern lot line.

It does say that they should consider offsetting but does not make it a rule and as I posted previously there are specific rules on how close buildings can be. It would appear that the developer is attempting to meet these guidelines even in the Johnson portion where we see both sides that are close to the lot line are basically blank. That said I still find it hard to believe that the Johnson portion meets the building setback requirements.

^ OK, well thats what I thought it means, which at 14 stories, means 5.5/14=40% of the property is covered. That proposal looks to me to be is nowhere near that, triangle section or not. But i could be wrong - maybe the courtyard between the buildings is bigger than it looks.

FSR can be deceptive. The building with the highest density in Victoria is the Belmont Building at Humboldt and Government which I believe is 8:1 FSR. The 834 I believe though may be corrected is 4.2:1 as is the Juliet. I believe the Corazon is 3.2:1.

^ Hmmm, maybe. Still not clear how it is calculated. Chard's website says 834 Johnson is 80,000 sqft and 112 units. Thats 714 sqft/unit, which seems pretty small if you include common areas and balconies etc.

So does FSR not include common areas? What about parking garages etc?

Sorry if this is getting a bit off topic, but the question is what should we expect on the Pandora parcel here? Personally I'm thinking 3:1, and no bonus density because the bonus density is already used up along Johnson.

No it includes the entire floor plate of each floor from the ground up. Parking garages are not considered in FSR.

The developer can apply for bonus density for the whole lot. Without it they would be limited to 3:1. I think the Johnson part of the project will never get past planning. I guess we will see. I really think a nice little three storey townhouse complex would work well there. You could easily put in at least 5. If they go that way than I am ok with them going 5.5:1 on Pandora. It would be great if they could go up to 16 and thin it out a bit.

^ I agree that something taller and thinner could work on Pandora.

They were drilling on the Pandora site this morning, anyone heard any news on the progress of this proposal? Aside from the fact that it is always nice to wake up to concrete / rock being drilled at 8am on a Saturday....

Is there a name on the trucks? I bet it's Ryziuk doing test drilling. The parking lot was done a while ago.

No names that I can see, although I found this from a Google search of the address this morning...

Is it an assumption on my part that this proposal is a go then, including the 10 story building on the Johnson St side?

Interesting rendering. Makes it look like the oceanfront is just a quick jog across the eighteenth fairway.

Soil, ground and other testing is part of the process. This project is still a ways from receiving municipal approval.

Yeah there have not been any public meetings. This will not be breaking ground in any form till 2014.