The author of the G&M op-ed is also averse to discussing who the big players in Canada's rental industry are, and their ties to Canadian pension funds.

With almost two thirds of an acre on the waterfront, this property has a magnificent view of Cowichan Bay and one of the most amazing sunsets you will ever lay eyes on. Cleared and ready for you to build your dream home, this location is one of the most sought-after oceanfronts you can find. If you're looking to build in an area that everyone can't wait to move into, don't hesitate in this busy market!


There is just one more step before a controversial bill, that could change the way many people buy homes, becomes law. If signed by Oregon Gov. Kate Brown, House Bill 2550 will ban the practice of ‘love letters’ during a home sale. The measure is to help avoid buyer selection based on race, sex, or religion in violation of federal fair housing laws.


seems though it might also decrease transparency. you might sell your house to the KKK. or even worse Dave Rubin.

It was previously owned by Raoul Emil Malak, who bought it in 2012, government records show.

Ecoasis, the company behind Bear Mountain Resort on Skirt Mountain in Langford and the Highlands, sold its hotel in 2019, describing the sale at the time as a working alliance with Malak who would take control of the Westin Bear Mountain.

$1.22M was the average paid for a single-family-home in June, the highest average (and a corresponding median) ever.

Mayor Helps wants to put a stop to council’s gatekeeping of development proposals that meet the OCP guidelines.

The mayor says such a clause should remain in effect until a 7,000-unit under-supply of housing is rectified.

7,000-unit under-supply of homes in the City of Victoria has mayor advocating fewer political obstacles to development
https://victoria.cit...to-development/

Mayor Helps wants to put a stop to council’s gatekeeping of development proposals that meet the OCP guidelines.

The mayor says such a clause should remain in effect until a 7,000-unit under-supply of housing is rectified.

7,000-unit under-supply of homes in the City of Victoria has mayor advocating fewer political obstacles to development
https://victoria.cit...to-development/


The Mayor's blog hadn't even started before there was a plug for Aryze. Maybe she could sell her own naming rights like they do with arenas? The Honourable (your development company's name here), Mayor of Victoria.

just like we will fund homeless services until we save all the money on policing.

The problem is, where do you buy after the cheque gets cashed? We have such a low inventory environment at the moment, that people are afraid to sell their homes. That's why active inventory is nearly half of what it was one year ago, which was then considered ultra-low.

Inventory to buy is part of the problem but it may equally be that people have simply settled in for the long term. These things tend to go in cycles.

Critics of this notion will often point out that only 10 per cent of the Vancouver housing market is owned by non-residents. However, given that only a small fraction of a city’s housing market will come up for sale in a typical year, even a moderate amount of outside cash thrown into the mix can tip the scales into the realm of $1 million teardowns. Stock prices, for instance, are routinely sent into the stratosphere by buyers bidding up a small fraction of a company’s available shares.

“While many downplay this factor (“it’s only X% of the buyers!”), Economics 101 will tell you that the marginal buyer sets the price,” wrote BMO Chief Economist Douglas Porter in a 2016 report.

Nevertheless, it would be wrong to characterize foreign capital as the singular factor blowing up the price of Canadian real estate.

New Zealand, for instance, maintains an outright ban on any foreign ownership of an existing property within the country. This means that if you’re a non-resident who wants to live amongst Kiwis (such as Canadian-born director James Cameron), you’ve got to be prepared to build your own home. Despite this, New Zealand housing prices have still managed to rise an eye-watering 24 per cent over the last 12 months.

It's going to have to be well over market value for anyone to be interested. Seven figures is pretty much every lot in the core now. I'd be surprised if anyone with a 1.2m house would accept less than at least 1.5-1.6 at the moment. That 300-400 will evaporate pretty quickly too.

Jeff Bray: “We need to build lots of low-income housing, lots of purpose-built rentals, high-end condos, housing for workers. But really it’s the purpose-built rental housing that is so critical, as it brings in the young professionals, the downtown workers, and ensures our employers operate in a community that provides attainable housing for their employees, and through this diversity our businesses can be more resilient to withstand any future downturn in the economy.”

I often wonder why there aren't any truly pro-housing candidates for council. The NIMBYs are a powerful voting bloc, but I believe there are a lot of us who want to see more construction and higher density. I can't remember any local candidates who really pushed it as an election issue, though.

^ “more construction and higher density” there is a political platform worthy of rejection. That’s how they do it in Langhole.

To what end? What are we trying to accomplish? Cheaper home prices? Less taxes?

Not gonna happen. Trust me...your children will not be able to afford to live here no matter what you do to try and change it.

Look there are 1,000 more deaths in Greater Victoria than there are births, yet the population is growing by 4,000 per year. That means that every year there are 5,000 people getting off the ferry or the airplane that don’t go home.

We only just figured out how to deal with everyone’ sewage, and we didn’t do a very good job of that. Our transportation infrastructure is woefully inadequate and the water supply will be the next rare commodity that was a foreseeable oversight.

Before we start banging on the drum saying we need more housing, my honest opinion is that we need to look into the future and absorb the fact that Vancouver Island will never be the same and serious long term planning (including development restrictions) is needed much more than building instant housing in order to accommodate the hoards of incoming googans with a fishing rod in their hand and a kayak on the roof.

Somebody had to say it.

we have no shortage of space. 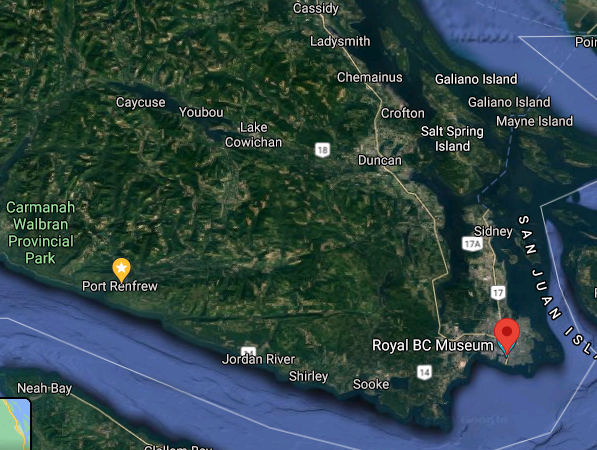 the UK is 8 times larger than the Island and and has 90x the population.  and still has lots of countryside.

If we curtail the freedom of mobility in this country, we’ll be facing far more of a quagmire than water shortages and traffic congestion.

So long as Canada remains a free country all we can do is try to accommodate those who want to move here. Economics and infrastructure already keep many out, but when you have two universities and two colleges that not just educate but brand Victoria to their students we’re going to have thousands of people wanting to stay after their education, or move back as soon as they can when they leave for employment.

^ Good for them. Let them build their own house.

Here is a perfect example in todays TC. They sell their Toronto home and then start whining in the local press that they are having trouble finding what they want.

What did they think was going to happen? Didn't they do their research? What ....Toronto doesn't have an internet or a telephone?

I'm sorry Mike but people have been moving here until they have filled it up. Now they move here and whine about it being full. If they do find a roof over their head they complain about it not being affordable. Of course it's unaffordable.....it's full.

Retired couple Skip Dean and Denbigh Atack Dean, who have a small dog, sold their Toronto-area home to move here. They’ve discovered “it’s a tough go,” to find a two-to-three bedroom house with a garage in the $2,000 to $3,000 range.