🔥🚔Suspicious Fires At Storage and Vehicle Rental Business Under Investigation🚔🔥

Victoria, BC – Investigators are asking for witnesses to come forward after a suspicious fire at storage and vehicle rental business last night.

Victoria Fire Department firefighters requested officers attend for a report of a suspicious fire at a storage and vehicle rental business in the 700-block of Topaz Avenue just before 10 p.m. last night. Officers attended and began their investigation. Two storage units and two vehicles were damaged in the fire. There were no injuries. Investigators have determined these fires are suspicious.

add to that two more dumpster fires in fernwood earlier that evening, it sounds like there is an arsonist out there, there has been a spike in fires lately it seems (they did catch one person in james bay but more fires are still happening after that happened)

I never heard of that move so I looked it up and basically you spiral down at airplane speed and at the very last second skim across water or ground like you're landing on a runway. Sounds actually pretty stupid because there is zero margin for error. Either it goes OK or you faceplant at 100 mph.

What some people will do for a rush. I like to.. well we won’t talk about that.

I never heard of that move so I looked it up and basically you spiral down at airplane speed and at the very last second skim across water or ground like you're landing on a runway. Sounds actually pretty stupid because there is zero margin for error. Either it goes OK or you faceplant at 100 mph.

yes it's asking for trouble for sure.

Also, the headline writer doesn't know the definition of "complicated". The move is actually simple: spiral, pull up, land. You might call it complex but in order to be complicated you would have to do a crossword puzzle on the way down while counting backward from 100.

Saanich fire crews and police remain on scene at Strawberry Vale Elementary school in the 4100-block of Rosedale Avenue after a fire broke out early Saturday morning.

According to a tweet from the Saanich Fire Department, there is extensive damage to the roof and an investigation is underway. 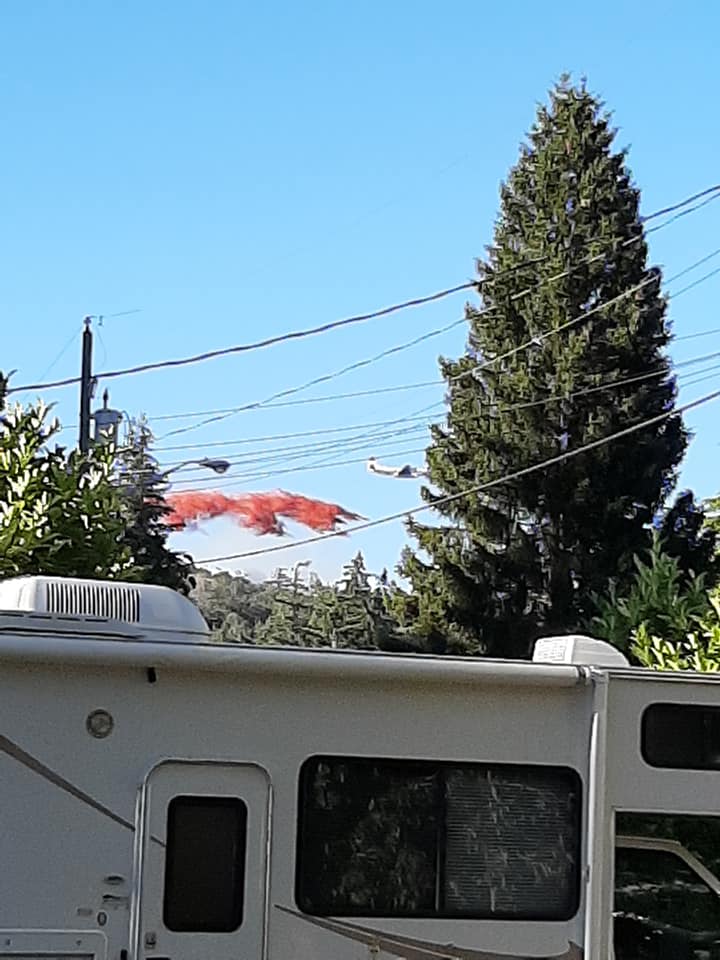 We took a few photos from different spots......crazy no homes where lost......

On July 21, 2020 at 6:45 p.m. West Shore RCMP first responders, Metchosin Fire Rescue and BC Ambulance responded to a 911 call for a possible drowning incident at Matheson Lake in Metchosin. Witnesses reported a 32-year-old female had been rescued from the water at Matheson Lake and was in medical distress. Friends and witnesses had started CPR prior to emergency crews responding.

West Shore RCMP, along with an off duty Oak Bay police officer and an off duty Saanich fire fighter performed CPR. Additional medical first responders including Metchosin Fire Rescue and BC Ambulance arrived quickly and provided advanced life support. The female was transported to hospital in critical condition.

It was quickly put out. 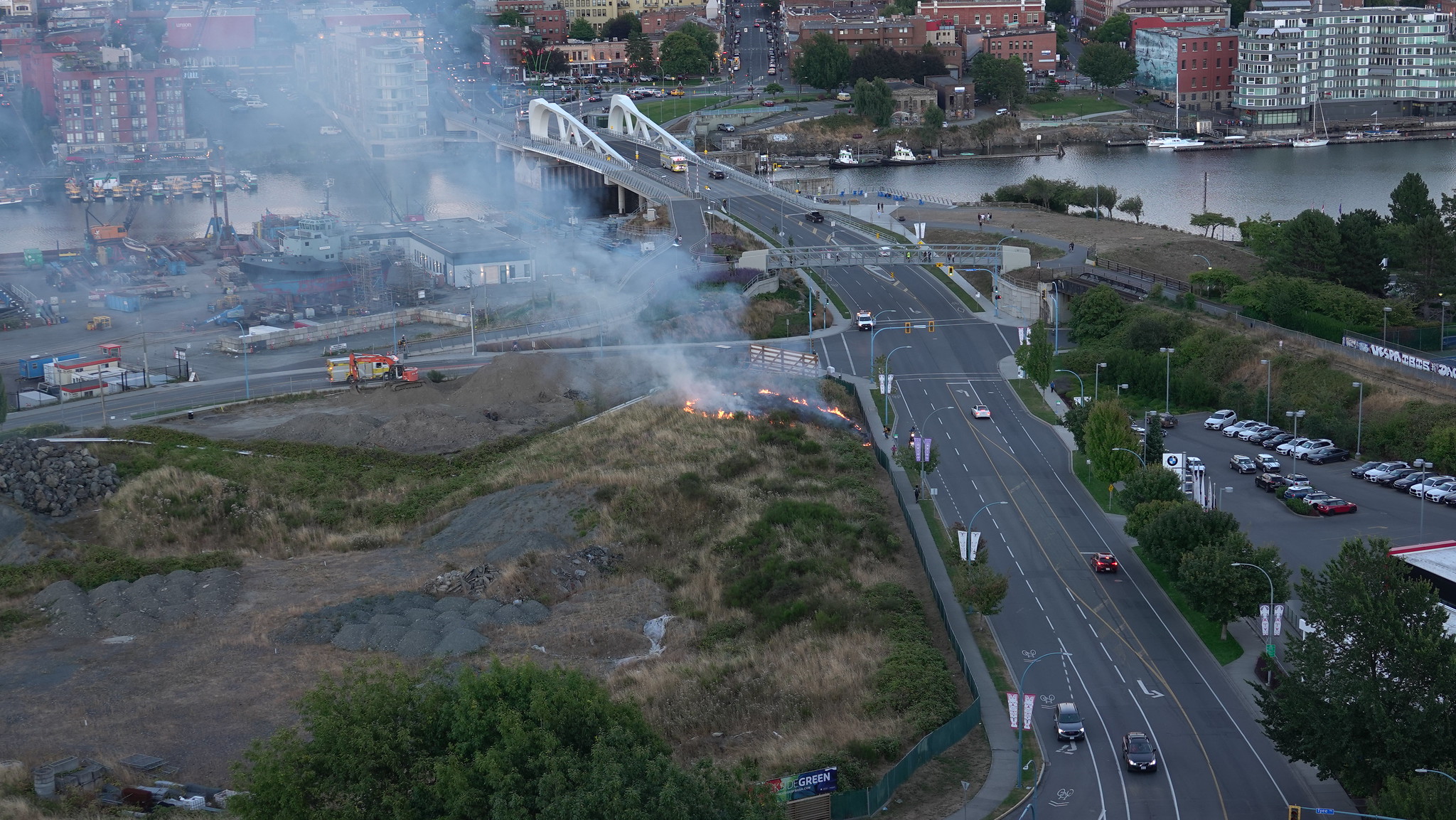 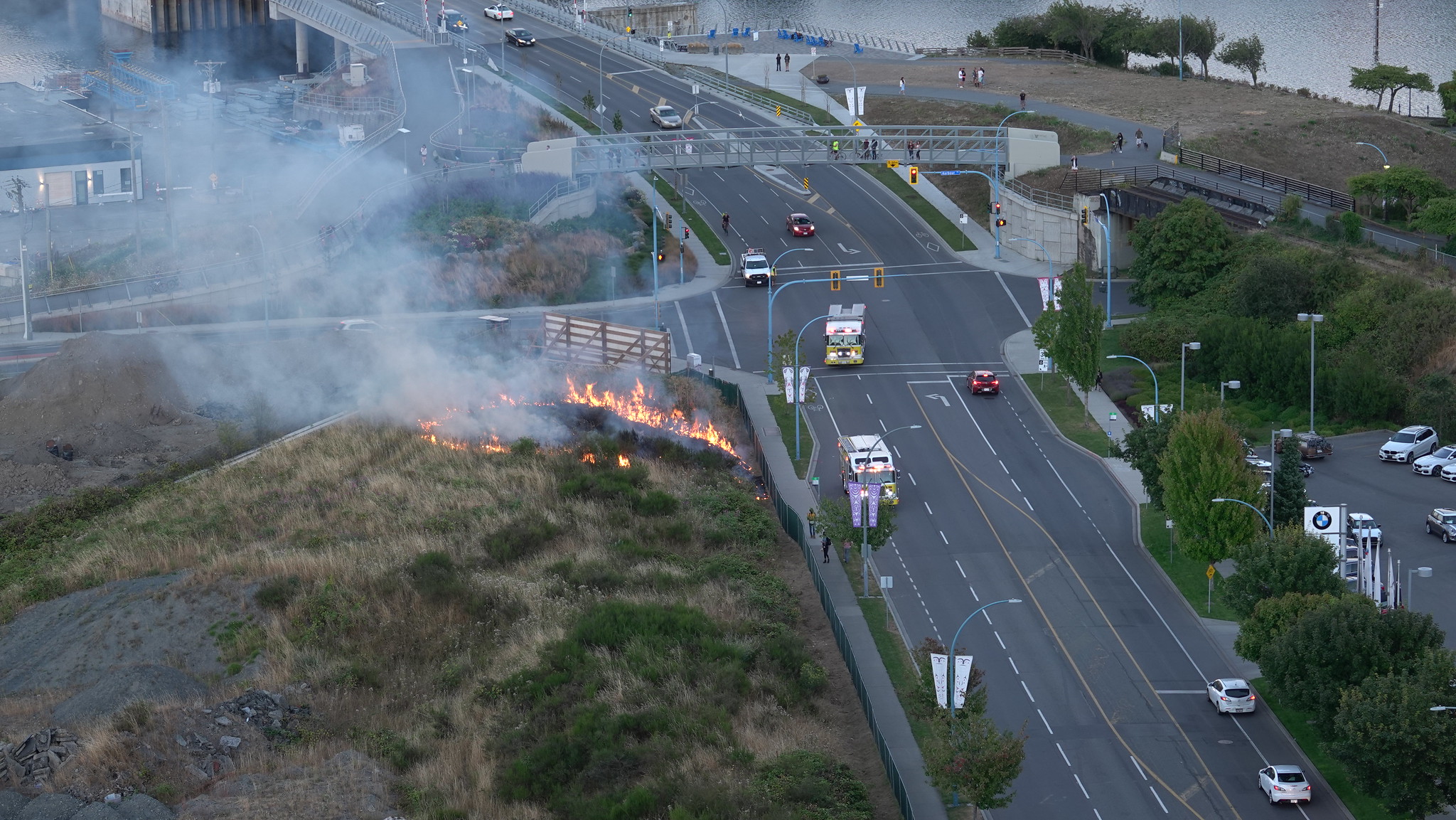 Looks suspicious, as though someone spilled gasoline in an oval shape.

A 4K clip of yesterday's firefighters in action on that grass fire...

There is a bus stop where the fire engine is parked. Given the wind direction and burn pattern, a smoker probably tossed a cigarette butt before boarding a bus.

Victoria, BC – Patrol officers and officers from VicPD’s Forensic Identification Section (FIS) are investigating after a man suffered life-threatening injuries in a fire this morning.

At approximately 7:40 a.m. Patrol officers were called to a multi-unit residential building in the 800-block of Fisgard Street for a report that a man was injured in a fire. Victoria Fire Department firefighters were already on scene and extinguished the fire, which was contained to one suite.

The lone occupant of the suite suffered life-threatening injuries and was transported to the hospital by BC Emergency Health Services paramedics.

The initial investigation indicates the fire is believed to be non-suspicious. FIS officers remain on scene and are continuing the investigation.

Victoria, BC – A woman is safely in hospital after being rescued from the Gorge Waterway by a passerby, VicPD officers, and the Victoria Fire Department (VFD) last night.

Shortly before 9:30 p.m. on September 2nd, Patrol officers were called to the Selkirk Trestle where a woman in crisis was reported to have entered the Gorge Waterway. On scene, officers saw that a passerby had climbed down the trestle and assisted in getting the woman to the safety of a trestle piling.

VFD attended with a marine rescue boat and worked with officers and the passerby to rescue the woman. VFD transported the woman in crisis and the man assisting her to a nearby dock.

Officers apprehended the woman under section 28 of the Mental Health Act, and transported her to hospital for assessment. The woman and the man who assisted her were not physically injured in the incident.