The National Post, one of two national dailies in Canada and at one point the Times Colonist's national counterpart, is now so rife with spelling and grammatical mistakes I have to wonder whether there is any quality control whatsoever. If writers aren't making up claims to fit their story (recall the "BC wants Vancouver as capital" nonsense) they're showing us how inept they are at using a spell checker, double-checking unimportant things like dates and using proper grammar.

A major headline (actually, as I write this it is the leading headline on the NP site) this morning reads 'People are going to be afraid': As Calgary begins to return home, Medicine Hat evacuates in face new floods

And further down in the same article a picture caption reads "...immersed in water during heavy flooding on Saturday, June 2, 2013"

Not to be outdone of course, once again in the same article a quote is written as "It was surge in water. It wasn't lapping, it was a surge." Proper writing style requires that the author insert [a] between It and was if the quote requires a little bit of help. But given all of the other mistakes one has to wonder whether the individual wasn't in fact misquoted.

Day by day, article after article, the National Post is becoming a bit of an embarrassment

If it's any consolation, it's 15 years old, and has never made a profit.

...and let me guess, they're wondering why.

But wait, it gets better.

They've somehow pulled off yet another hat trick today.

The story links to the wrong article, the title refers to one thing, and the description to another. Another day, another round of goofs. How on earth is this happening? With Conrad Black still a contributing writer you'd think he'd have made his feelings known to the editorial team about their laissez faire approach to editing.

What's also been happening as of late are articles based on content written by the Globe or Huffington Post. At least the NP is courteous enough to reference those sources unlike much of our local Victoria media that has an apparent inferiority complex over ownership of the news.

Can someone change the thread title to include factually incorrect now, too?

"Mr. Anhang had developed beachfront condominiums and hotels in Puerto Rico and also was CEO of an online gambling software company based in Costa Rica. He had moved to the island a year before the attack.

'If there’s one loser in all of this, it’s the island of Puerto Rico. He was really committed to building up the economy,' his father said."

I'm concerned about this kind of a story.  The story here is that she may or may not have been captured or may or may not be missing.  Is that the basis for publishing a story, proclaiming that you don't have the actual facts?

Are you kidding me, NP?

Don't even show a photo if we are to be offended by it.  And esp. don't place a caption that says "based on spacing of tooth marks.." then fail to show us the marks. 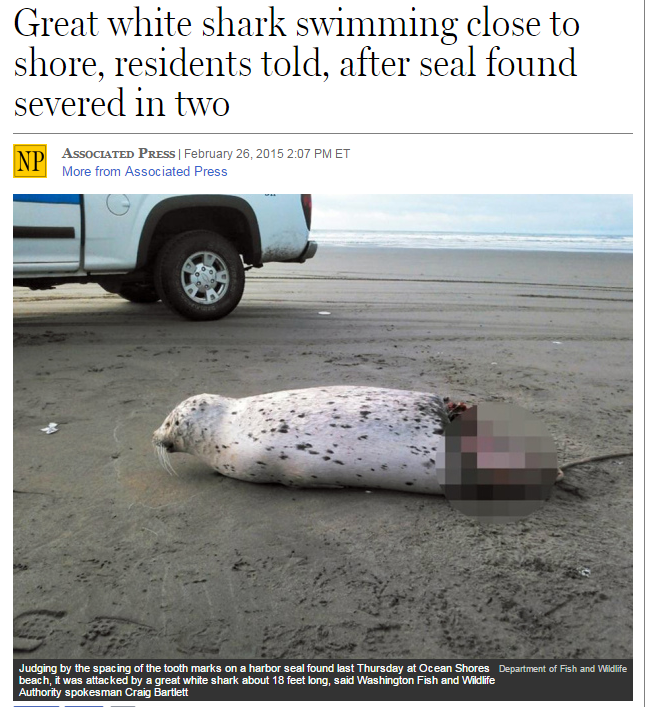 Phew! I wondered what I had said.

I had no idea there were great whites, or any type of shark rather, anywhere around here. I thought the Orca population limited that, and the water was too cold for most sharks. Someone commented that great whites range as far north as Alaska! Found that very interesting.

BC used to have a massive population of Basking Sharks which are the second biggest in the world but hunting in the early 20th Century killed them off. There are of course still lots of Mud Sharks.

BC used to have a massive population of Basking Sharks which are the second biggest in the world but hunting in the early 20th Century killed them off. There are of course still lots of Mud Sharks.

I guess I should have specified that I meant large sharks. The Basking qualifies, though it isn't a predatory one so much. Mud sharks or dogfish are small, if I recall, just 3 feet or so.