But as I said a lot of assumption. There was even going around today that the owner did it. Know the son that was the managing owner for the family business, wife, two kids, and a shame some people would start spreading BS like that about him.

So with no proof, lots of conjecture and misinformation.

Well, every time anything burns down there's always going to be speculation that the owner did it. No matter how far fetched. Was on the radio this morning that the owners intend to rebuild, it is there hope is what they said.

Could it be both? That huge lot is not so needed anymore, and I can assure you, that liquor store makes good money, even if the pub doesn't. But you can't have one without the other. Condos facing the back and a pub and liquor store facing Esq. Rd.?

you can have just one or the other these days. you don't need to keep the operational pub to have the store anymore

Paving the way for beer bars on the island!

you can have just one or the other these days. you don't need to keep the operational pub to have the store anymore

Walked by today and it's a pile of rubble in a fenced off area with two security guards. Not sure it would be the insurance company or Township of Esquimalt paying for that?

The Songhees First Nation is considering the redevelopment of the former B.C. government liquor store site at the corner of Esquimalt and Admirals roads.

The province will soon transfer ownership of the parcel to the Songhees, which is looking for parties interested in either operating a commercial business on a lease arrangement with the First Nation or redeveloping it, says a request for proposals.

The RFP notes that the “high-profile” site sees large volumes of traffic flow by every day.... Folks, remember our posting guidelines from other websites, we can't post the whole article, or even the bulk of it - VHF

I found a neat way of finding photos of places that no longer exist and that would be Google Street View. The pictures are from June 2012.

Tudor House may rise from ashes this year

A rebuild is still on tap for Esquimalt’s historic Tudor House Pub, lost to a fire on July 16, 2013 after 109 years as a popular community watering hole.

It’s hoped that reconstruction will get underway this year, said manager Tim Dumas.

He said a major chunk of insurance money has yet to be paid out, contributing to the delay.

An architect hired by the owners —Dirty Digger Holdings Ltd, formerly known as Jadwiga Holdings Ltd. and Rambo Management Ltd. — is working with the township on potential plans.

Esquimalt Mayor Barb Desjardins is eager to see the landmark up and running again and finds it encouraging that representatives have come in to talk to staff.

“This is a key corner and commercial node in our community,” Desjardins said.

“I know the military misses it and just about anybody in that area of town.”

This site needs more density than just a re-built pub.

Dirty Digger and Rambo, together at last. Only in esquimalt. 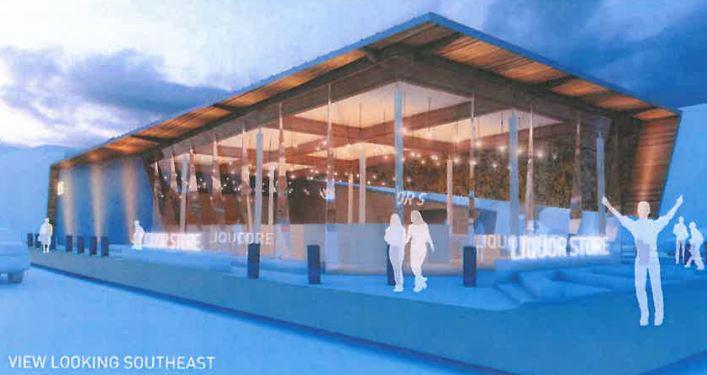 Is that really all that is going to be built on this site? It seems terribly under-scaled.

Mayor Barb Desjardins says the owners are still considering a hotel and pub, and they have the option of a 12-storey building. But for now that area will be used as green space and a community garden.

Future phases I'm sure. Pubs are not the money makers they once were, so there's no rush to build it.

This is going to be nice. Real nice.

The design for the replacement of Esquimalt's Tudor House Pub and liquor store at the nexus of Admirals and Esquimalt roads has been revealed.

Vancouver-based architectural firm GBL Architects plans to use extensive glass and angular design to create what is arguably the most unique, albeit unorthodox, liquor store retail environment on Vancouver Island (if not the entire province).

The current plans, however, do not include a replacement pub, something area residents have longed for since fire destroyed the local hangout in 2013. Nevertheless, construction of the 9,000 square foot facility, which includes a 2,500 square foot mezzanine level, is expected to begin this summer with completion in 2017. C 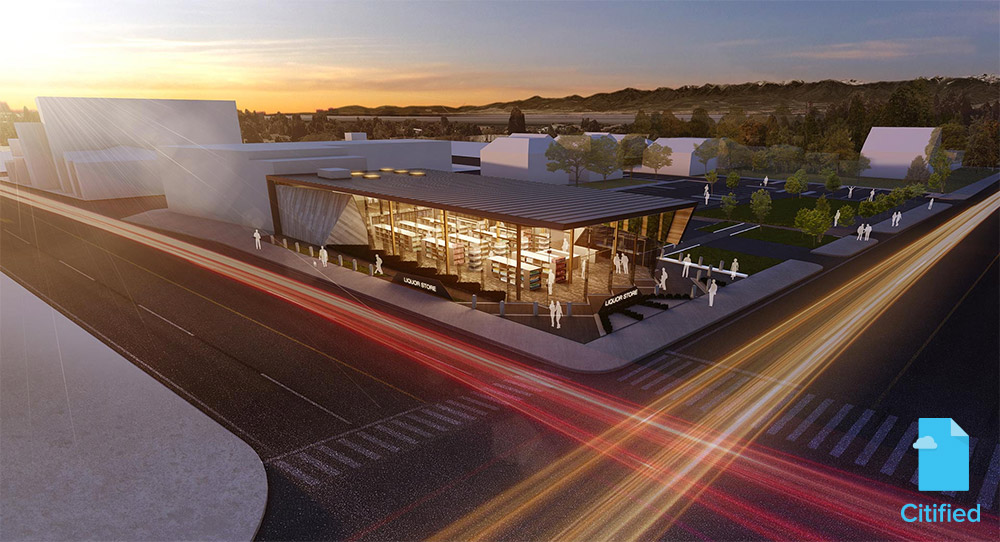 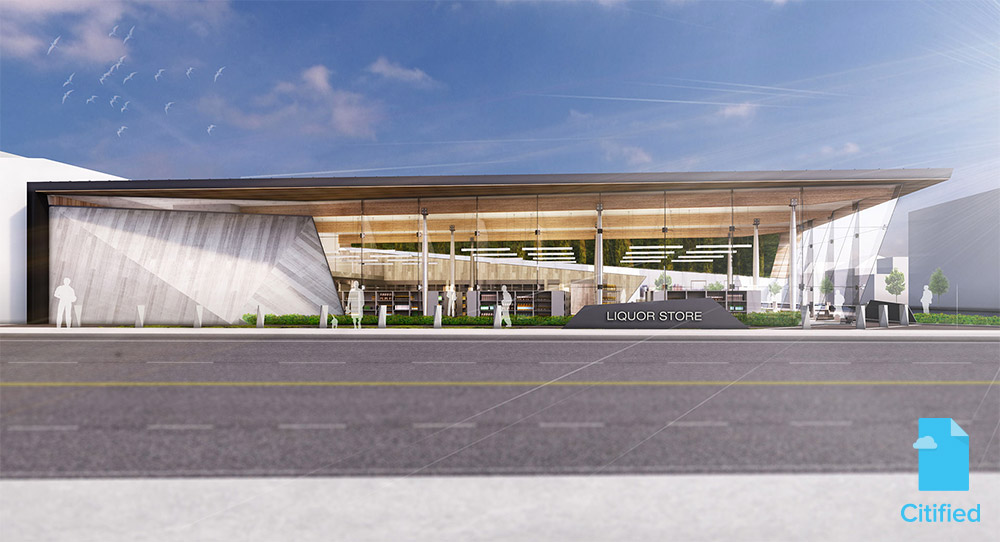 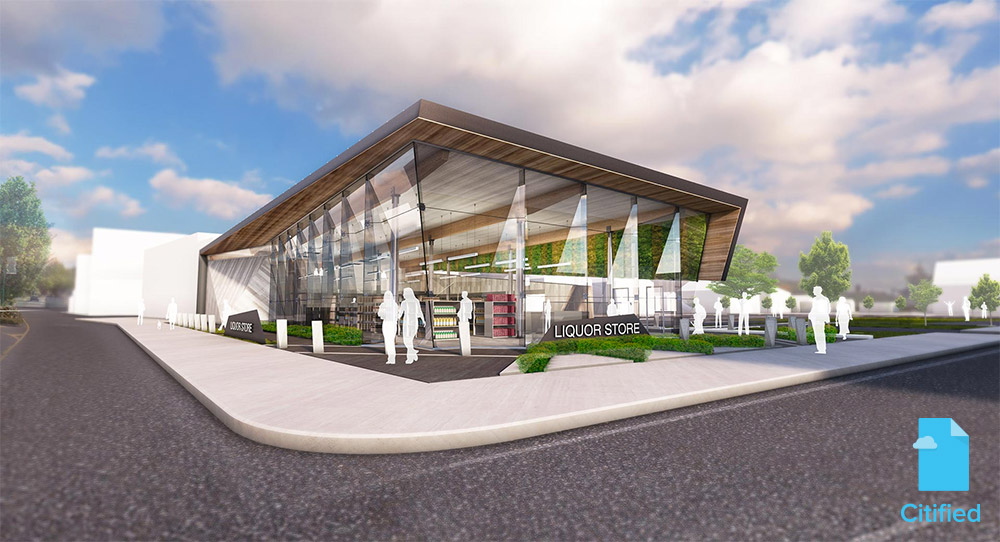 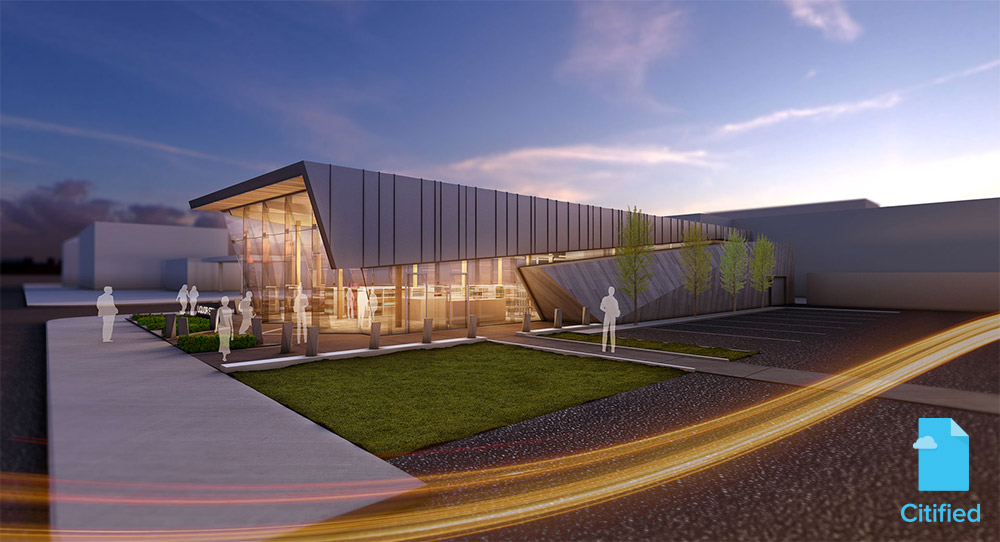 No pub? What's the point of just building another liquor store? Esquimalt needs an anchor spot for locals to congregate.

Again I must say, visually impressive, but tragically not part of a larger redevelopment of this massive parking lot.

A pub will be part of the development next to Esquimalt's city hall. I guess there's no business case for two pubs so close to each other.

Isn't this new liquor store on the same corner as the existing one.  Everybody calm the hell down.  OMG...so much drama.

Isn't this new liquor store on the same corner as the existing one.  Everybody calm the hell down.  OMG...so much drama.

The old liquor store is closed will become a Red Barn Market.

Use the page links at the lower-left to go to the next page to read additional posts.
Back to Retail Establishments & Grocery Markets