The More Victoria Changes, the More It Stays the Same...

Let's just say the CoV has demonstrated curious priorities re: the things it does and does not crack down upon. And police resources tend to be non-existent for serious things but abundant for trivial things:

If people won't walk 200 yards to see a ball game, aldermen aren't much interested in increasing parking space around the softball diamond in Beacon Hill Park.

Furthermore, they have ordered police to enforce parking prohibitions so that the ever-encroaching wave of automobiles will not damage the trees and grass in one of the city's beauty spots.

A spokesman for the Victoria Senior Men's Open Softball League pointed out that big crowds attended the games at the park, many of them senior citizens.

It was not fair to make them walk as far as they now had to see the play.

...parks superintendent Clifford Bate had another story. A survey was made, he said, and it showed that no spectator had to park more than 200 yards away from the ball diamond.

"The whole trouble these days is that no one wants to walk more than a few feet," said Ald. Cecil Parrott.

"The whole idea over the years has been to cut down parking in Beacon Hill Park, not increase it," said Ald. Geoffrey Edgelow.

Mr. Bate added that boulevard and trees were being damaged on Heywood Avenue now by parking, and police were not enforcing restrictions.

So if I understand these articles correctly, dangers to children in BHP have existed long enough to be considered heritage and therefore Council's current laissez-faire attitude towards juvenile security in the park is simply historical preservation??

You jumped the gun on me. See the parking article above for the point I'm making here.

Why can't we hire five or ten men to patrol Beacon Hill Park? Surely our children are worth as much as a civic fountain? Or underground wiring? Or flower baskets?

...aldermen aren't much interested in increasing parking space around the softball diamond in Beacon Hill Park.

Furthermore, they have ordered police to enforce parking prohibitions

So if I understand these articles correctly, dangers to children in BHP have existed long enough to be considered heritage and therefore Council's current laissez-faire attitude towards juvenile security in the park is simply historical preservation??

Like I say, they've had some curious priorities re: BHP for many decades running.

^Those two issues from the 1960s show us the now familiar Victoria script re: policing. You've got a serious criminal issue in the park, so politicians set aside some additional money to hire commissionaires (always has to be additional money, because Vic PD surely doesn't have the budget to respond to... crime). But then later you've got park visitors parking cars where they shouldn't be parking cars, and that issue falls well within the normal and expected responsibilities of the police department.

Police patrols in the city's largest park shouldn't be regarded as something above and beyond, is my point.

Because when the park patrols eliminate crime, citizens cry: why are we wasting money on cops in a crime-free park when known criminals are preying on the Downtown and adjoining neighbourhoods.

I don't know, that whole "we're wasting money on essential services" thing didn't really gain wider momentum until very recently. Back in the day you never heard anybody claim that city police and fire services were a frill.

Remember not too long ago when a mayor of another municipality suggested people weren't getting value for their policing dollar if the community wasn't full of crime? It seemed nutty because we had never heard anything like that before.

I suppose we're not getting good value for our city parks if they are not full of "campers". Presumably this plays into current decision making.

"Gentlemen, our evolution from committee to task force is complete. Our work here is done".

I have many memories of the McDonald's restaurant in this building, but I can't find any pictures of it.

Anyway, once again I have to ask why Burger King's efforts in Victoria were so controversial whereas McDonald's, Dairy Queen, Kentucky Fried chicken, A&W, Burger Chef and others had already been in business for years. McDonald's in particular would continue to expand. Was Burger King the villain simply because it was late to the party? Or were there other machinations behind the scenes?

The golden arches of McDonald's may yet grace downtown Victoria. (aastra says: the Pandora location was already celebrating its 10th birthday by this point)

The hamburger firm announced Tuesday it would open an outlet at 1130 Douglas, between Fort and View.

A company spokesman said plans called for a two-storey restaurant.

He said architects were already working on a design that would enhance the brick building's architectural features.

The firm hopes to have the restaurant in operation by Christmas.

In 1977, McDonald's tried to establish an outlet at Douglas and Broughton, next to the Strathcona Hotel, but had to drop plans because fire regulations made construction of a restaurant at the site unfeasible.

(aastra says: What war? Didn't you just tell me McDonald's was opening in the heart of downtown on Douglas between Fort and View?)

The city's resolve to keep a free-standing fast-food restaurant from being built in the 800-block Yates was strengthened Thursday.

City council decided to appeal a ruling Wednesday by the B.C. Supreme Court which ordered the city to issue a building permit to a developer who wants to build a Burger King restaurant on the former Empress Motors site.

Council also approved a bylaw declaring all land bounded by Blanshard and Quadra, Johnson and View a development permit area.

The prospective Burger King site is within the boundaries of the development permit area.

The case, being fought in two courts and the council chamber, began when the developer applied for a building permit. The city refused the application.

But Mr. Justice Thomas Berger (!) ruled that the city didn't have the power under the B.C. Municipal Act to withhold the building permit and ordered that the permit be issued. 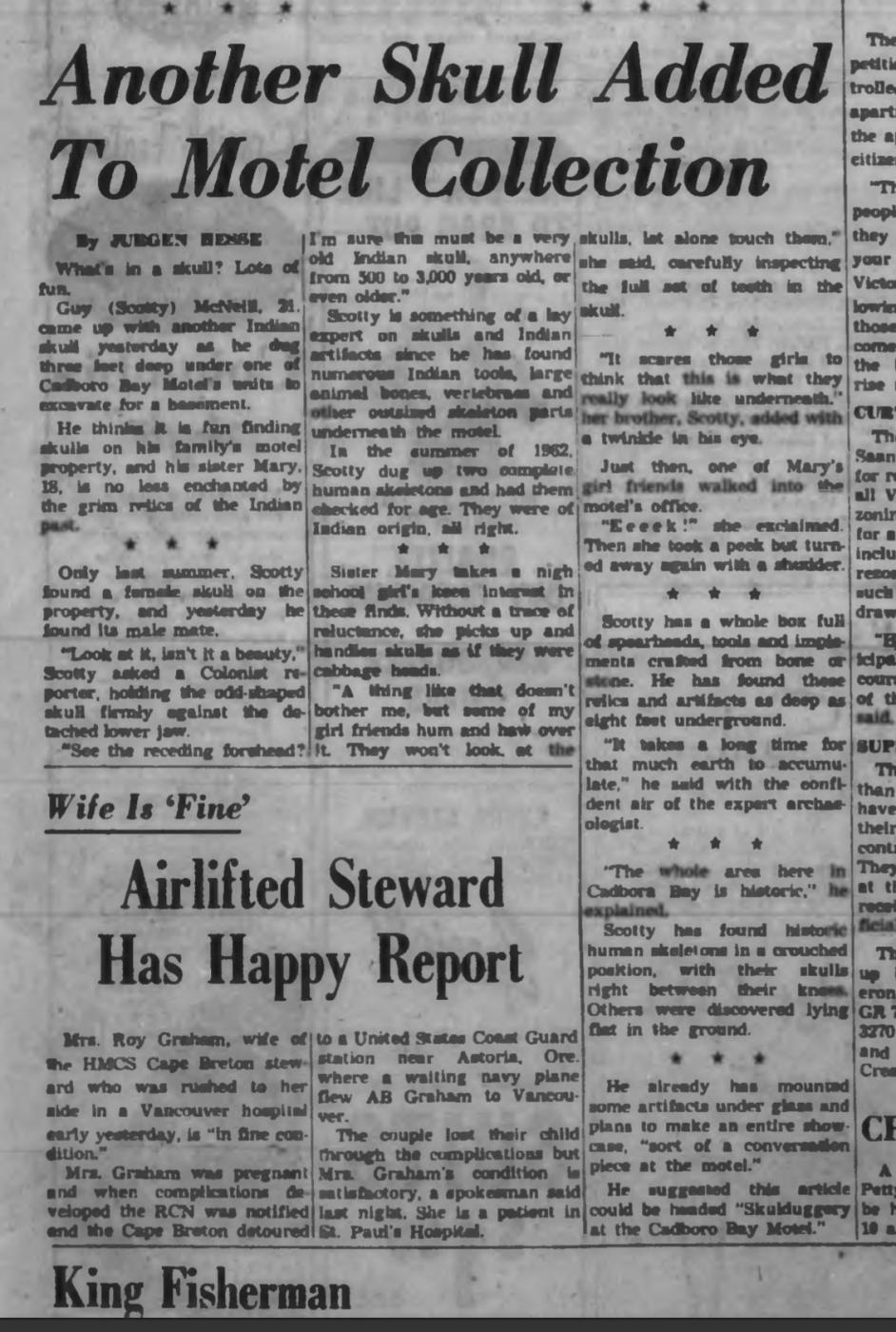