Somehow, I just get the feeling that the current zoning, after you take into account setbacks and fsr, allows for not all that much on this site.  It'll be interesting to see how the re-zoning goes. 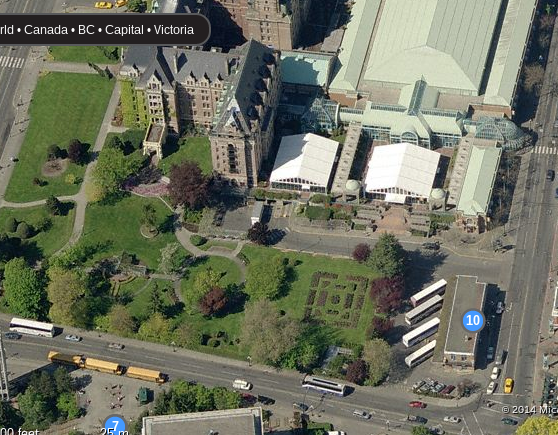 Part of the rose garden will go as well, no doubt.

This is a small property, isn't it? I guess the lot would allow for a similar footprint to Astoria or Aria (with minimal setbacks). The zoning will be a big fight, as they obviously will want to go higher than low-rise.

I want to get excited, but have a bad feeling about this one.

Next to the Empress and Crystal Garden. Across the street from Thunderbird park. Too close to the Royal BC Museum. Would really limit the views from the Budget rent-a-car lot. Megasupertall-10 floor-skyscrapers can't possibly be built within 50 miles of the Leg. This could theoretically somehow impact somebody from James Bay because of cruise ship exhaust interacting with the gravitational pull of a new building here... or something. Will somebody please think of the lawn bowlers?

I can hear the whining, complaining and nimby-isms already and I'm starting to get a headache.

My guess is that the new owner would want this building to be of a quality to blend in with the Empress, especially if he continues to own the site even after development.

That would be an expensive and likely upsetting idea...

Part of the rose garden will go as well, no doubt.

Can anyone grab the actual zoning map, see how these properties are divided up?  If they need the rose garden, might not that be part of the hotel property?  We might have several parcels here.

That would be an expensive and likely upsetting idea...

Being a good business person, Bosa may well play his real hand close to his chest. He may even have a strategy that involves suggesting one thing to the City, and then accepting a "compromise" that is actually what he wanted in the first place. We'll have to wait to see what unfolds.

Not an expert on reading these things, but is this Empress property not just one big lot?

even if it isn't one big lot, its relatively trivial to 'sell' part of a property to a neighbouring one.

The lot boundaries and zoning is confusing for the lot.  The whole block is a single lot but the Government side has different zoning from the Douglas side, but the map is confusing and doesn't exactly specify.

even if it isn't one big lot, its relatively trivial to 'sell' part of a property to a neighbouring one.

Maybe, but it makes the re-zoning more complex.  You can't sell your SFD lot to your next-door neighbour then just put a house them that straddles both lots.

For several years now I've been dead set against any new wings on the hotel that imitate/mock the older blocks. It was that last concept that we saw for a major new wing on the south side there that really did it for me. The last addition that really worked/fit with the original was the Humboldt Street wing. Everything since then -- the 1980s stuff and the conference centre -- has left much to be desired. And I think the Humboldt Street side works not just because it was built in the 1920s but also because its height and massiveness and lack of a setback are so appropriate on the north side, facing the Belmont Building and downtown proper. Do something similar on the south side and I think it just wouldn't work very well. The south side is all about the transition away from downtown to James Bay, the legislative precinct, Beacon Hill Park, etc.

I've pondered it a lot and I think the best fit on the bus depot site would be an 8-10 story building of a modern style that in no way resembles the hotel. The footprint should be limited to the depot site as much as possible, to preserve the garden/greenery and to acknowledge the Empress Hotel's place up front. It can/should be a very fine building, but it shouldn't be in competition with the hotel. It should complement the hotel. It should be another fine building -- an altogether different building -- that happens to occupy the back corner of that block. The Belmont Building makes for a great example to follow, I think. It's a very impressive building, in style and scale, and yet it works with the Empress Hotel to make the harbour scene very grand. Methinks that's exactly the effect that we should want on the bus depot site and it's also the effect that we should want (again) on the old post office site.

For the new building, is any significant underground parking possible?  It's damn near sea level around here.

There is some below grade parking under the Conference Centre correct? If so, I assume at least one level of underground parking could go under any future development on the bus depot site.

There is some below grade parking under the Conference Centre correct? If so, I assume at least one level of underground parking could go under any future development on the bus depot site.

There's definitely underground parking there, but I'm not sure how much of it is actually that far underground. If memory serves it's only one level of parking.

One level under the Empress, two under the Convention Center

Predictive text and a tiny keyboard are not my friends!
You're not quite at the end of this discussion topic!