So XPO, that runs the pick-up operation, is no small company:

Adjusted earnings before interest, taxes, depreciation and amortization more than doubled to $352.7 million for the quarter from $166.1 million a year earlier, the company said.

This phrase is interesting (bolding mine):

The Collection Points are not IKEA stores and are owned by third party service provider XPO. While they do not have any products available for purchase, Collection Points allow IKEA to make shopping easier in markets that have been identified as having potential.

The fixed $80 fee is much higher than what I paid to Frugals the two times I used them. The lower fee combined with the convenience of delivery make them the better option in my eyes.

i think there is still a market for both places... the new place will be great for large orders or if you want t go in with a few friends to place an order to safe shipping.. though i do think it will cut into the frugals bottom line

It's time to beat the horse!!

Three down, nine more to go in the cross-country expansion journey for IKEA with the announcement of a new full-sized store in London, Ontario.

Here are the current CMA standings. I have a hard time believing that the South Island won't be among the remaining nine stores to be announced. 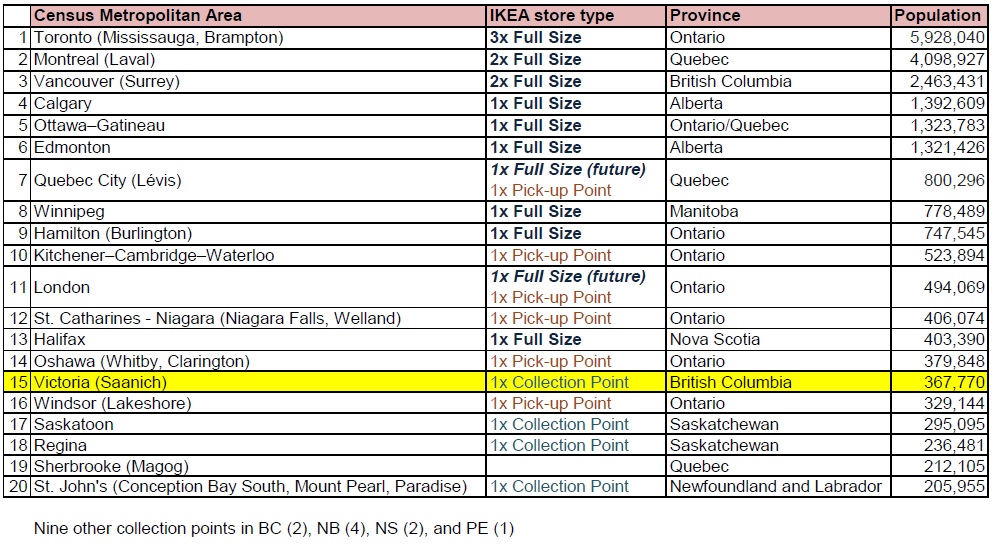 What's the difference between a pick-up and a collection point?

Ya, IKEA needs to understand we are on an Island so it's not like we are in Lethbridge.

One interesting note about this London location is the size. At only 270,000 sq ft, IKEA is going with a much smaller than usual footprint. Halifax just opened at 330,000 sq ft, while Quebec City is slated to be 340,000 sq ft.

A sign of a smaller footprint for smaller metro areas?

It's time to beat the horse!!

Three down, nine more to go in the cross-country expansion journey for IKEA with the announcement of a new full-sized store in London, Ontario.

Here are the current CMA standings. I have a hard time believing that the South Island won't be among the remaining nine stores to be announced.

Wait until IKEA announces that they are moving into the Sears location at Hillside Mall.

What's the difference between a pick-up and a collection point?

Collection points are just shipping company warehouses where IKEA can send bulk orders, and thus offer a lower shipping cost for online purchases. No merch for sale at those locations.

Seriously, the Sears location is like being handed a gift. Plenty of room for additional square footage if so desired. The only legit concern would be parking, but the mall could build another deck on the lot on the northeast corner. Other than that they wouldn't really need to alter their suburban model at all.

Hmmmmm, they might consider putting one right smack between Regina and Saskatoon.  One hour and 18 minutes from each city.

And the winning city is... Davidson, Saskatchewan!

Two things all IKEA full sized stores have in common. 1, standalone building on a big property and 2, easy access to a major highway. Hillside provides neither of those two.

If IKEA went with Hillside, it would stray away big time from their current full size store format. In fact it would be their first full size storefront not on its own property, as well as the only one so far away from a highway.

Maybe Saanich will offer up Cuthbert Holmes Park...primo location once the new interchange is in!

If we got an IKEA, it's really hard to imagine it not being on the Westshore. Cheaper land, highway access, closer to the mid-island, better parking, etc.

^ Ya, probably.  Central Saanich is losing out on stuff by not fixing Keating access.

Some observations and thoughts from me:

I've only been in the Richmond store, once, so I'm working in that context.

This is what I was getting at re: their suburban model. If they deem it absolutely necessary that the store must be in an ultra-suburban and/or difficult to access location then obviously Hillside would not be suitable. But if they really just want a large building with room for expansion on a site that has a ton of parking and that is easily accessible to the vast majority of the local market by car, then Hillside fits the bill all the same.

I have to say, I've never understood why their big box stores needed to be so remote.

I have to say, I've never understood why their big box stores needed to be so remote.

I'm sure it all comes down to cost. When your business model revolves around razor thin profit margins, every dollar saved counts.

I imagine that every big retailer is having emergency meetings right now and looking over all the Sears locations, to see where they can maybe make moves, even if they did not think a move was coming this soon.  I mean this can potentially accelerate some plans that were not as advanced if they see an opportunity..

Maybe Target will buy the leases. Wouldn't that be great if Target came to Canada. Kind of weird that they...

But when you look at the Winnipeg or Halifax locations they're literally on the very outer edge of the populated area of the CMAs. Another kilometer further out and they'd be on the farm or in the wilderness. Why are they such exceptionally un-central sites? They're about as physically alienated from the majority of the people in their local markets as they could possibly be.

I know, it works so don't argue with it. I'm just not understanding why obligating the majority of their customers to drive the longest possible distance seems to be such a key element of their recipe. More so than any other big box store, really. The average Wal-Mart store is very central and urban by comparison.

It seems Brits have grown tired of travelling for hours to get their meatball and flatpack fix, forcing Ikea to abandon its superstore format and open smaller outlets.

In a move that may save many a relationship, the Swedish furniture giant is launching a new retail format and heading for the high streets, in the hopes it will attract more customers.

Isn't it ironic that a supposedly* European operation would be so freeway/SUV focused? Pedestrians, transit users, cyclists... their money is no good.

^I bet if you spoke with IKEA's marketing department they would tell you they have a very loyal customer base that is willing to travel to go to their stores. Their customers also go to IKEA as a sort of special outing - this isn't the type of store you go to weekly or even monthly - so if going to an IKEA is a bit of a trek, their customers are apparently OK with that.

It's all cost/benefit. If IKEA has to spend an extra $X million dollars to build a store in a more central location, vs one out in the boonies, but the centrally located store will not generate any additional revenue or enough revenue to cover the extra investment, why would they make that financial decision?

Back to Retail Establishments & Grocery Markets