Isitt is lying low, BTW.  Has told media seeking comment that he is on vacation.

Vacation?  Like, on an airplane to some far away beach?

Unclear how far away you'd have to be to not chat on the phone, but that's the word.

So... would it be asking too much if we expect any local politicians who support one world government to also support municipal amalgamation? For consistency's sake, I mean?

If any local politicians DO support one world government and DON'T support municipal amalgamation, I honestly think my head would explode.

The guy's an extremist loon.

Isitt is lying low, BTW.  Has told media seeking comment that he is on vacation.

He responded to my email a couple of days ago regarding 1008 Pandora.

In conversation with him on a human being to human being level I think he's great, but his political ideals and some of his opinions regarding civic matters I feel are too extremist and in some ways could lead us down paths our society should not be lead down. But rest assured municipal politics is merely a stepping stone for him.

I think he realizes he's made a mistake and he's angered a lot of people. This whole environmental thing is starting to wear on people as nothing we do seems to lighten the incessant "global warming is coming and we're all gonna die" propaganda. We're inundated with it.

^ Most all NDPers are that way, nice folks  - with their hands in your pocket.

They're great dreamers, I'll give them that. But then when things are good, when you live in the land of plenty, when you're safe and have basic needs available to you at all times, it's easy to want more.

The NDP folk seem to despise government (Liberals and the Cons, I guess) but at every step they create a thicker, less manageable bureaucracy. Harper is cutting the fat in Ottawa and people hate him for it. But then they'll turn around and complain about bureaucracy. I don't get it.

Any chance this thread will get back on topic?

I don't believe that I have seen it. I'll add it to my weekend reading.


Miles Selby was my Flight Sergeant in Air Cadets. It always makes me a little queasy to watch since then. He was a professional even back then...

Was able to watch a lot of the show from my deck about 4 k from the water. A few times they went right over the house.

I've seen a number of these things, and the performances never cease to amaze me. They fly so close together for so long at precisely the same speed and elevation, while turning, climbing, descending, right side up and upside down.

They are not actually at the same elevation, each aircraft is offset a bit from the next one.

I understand Isitt's point, but if you're going to have UN peacekeepers, you need jet pilots--an air force. And if you have a national air force, it is helpful to have an acrobatic team as it gives gifted pilots something tangible to aspire to and serves as a recruiting tool by inspiring young people. There are always complaints that our military and police need to be more professional and compassionate. Acrobatic flying can help with recruiting needs by instilling a love of flight in young people. 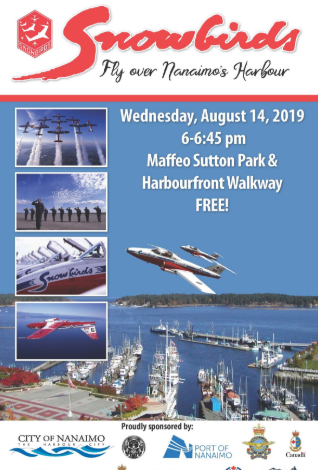 Is that a dig against Victoria?

i believe it was just announced today.  so some type of a late add to their schedule.  they are doing abbotsford and okanagan near this date.

Didn’t want to trigger Ben and his band of happy clappy’s!

Check out the screen shot of Isitt’s Facebook post from back in 2015. It’s on page three of this thread.

Like virtually every aspect of the CAF (in this case a relatively quiet and low profile) debate continues to simmer behind the scenes in terms of procuring a replacement for the old Tutor jets; the old dears entered active service as RCAF training aircraft 55 years ago - the current thinking, hard as it is to conceive, is to keep them airborne until 2030, when they will be 67 years old.

The "obvious" solution - replacing them with some of the F-18's due themselves to be retired as the RCAF front line interceptor - was rejected due to estimated maintenance costs being in the range of 20x that of the Tutor jets, per aircraft, in addition to the fact that smaller Canadian cities and their regional airports would miss out on future Snowbird performances due to insufficient runway length.

Initially the Tutor's were to have been retired in 2010 but, in the best Canadian tradition of punting any decision to procure modern contemporary military hardware now in favor making the budgetary headache someone else's problem later, that was extended out to 2020 and now it appears to 2030. "Naturally".

Like virtually every aspect of the CAF (in this case a relatively quiet and low profile) debate continues to simmer behind the scenes in terms of procuring a replacement for the old Tutor jets; the old dears entered active service as RCAF training aircraft 55 years ago - the current thinking, hard as it is to conceive, is to keep them airborne until 2030, when they will be 67 years old.
...


Age in years doesn’t mean all that much when it comes to aircraft. Consider the B-52H, which is scheduled to remain in active service with the US military until sometime around 2050. (The H is the newest version, which entered service in 1961.) And NASA once declared the airframe of the Martin Mars to be practically “as-new”, thanks in part to having fewer flying hours than your average 10-year-old airliner.

Since my taxes help pay for the Snowbirds, I’m quite okay with using the Tutors for as long as it’s reasonably feasible. If it ain’t broke, don’t replace it with something stupidly expensive. And when the time comes, why not use Hawks or Alphas for the demo team, like others do?