2019 is the 100th anniversary of the establishment of Remembrance Day, and the medallions are intended to commemorate that. In 1921 London plane trees were planted along Shelbourne Street in memory of fallen soldiers from our region. 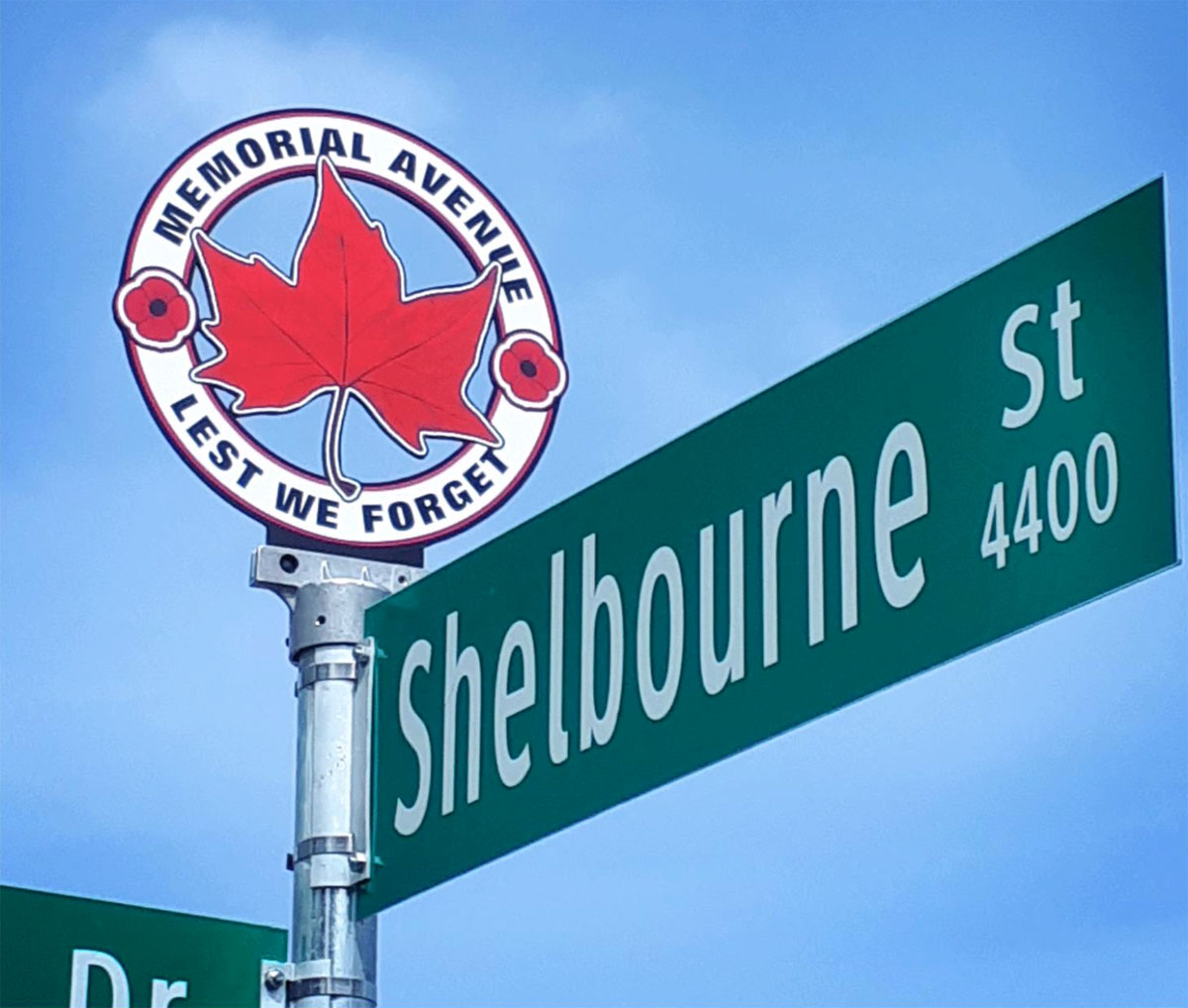 A tableau of period photographs and poppies will be projected onto the exterior of a Victoria cathedral this weekend.

Each evening from Friday until Remembrance Day on Monday, images will be projected onto the southern wall of Christ Church Cathedral in view of the church’s south lawn at the corner of Quadra Street and Burdett Avenue.

these look quite nice.

The City is marking the 100th anniversary of Armistice Day – now Remembrance Day – with the installation of 16 medallions along Shelbourne Street from North Dairy Road to Pembroke Street. The medallions, which read “Memorial Avenue” and “Lest We Forget,” will be placed atop existing street and traffic signs on both sides of the road.

Nice, that must get Ben isitt's goat

Better than the one above?

At some point we have to draw a line about the things we are willing to alter in the name of social agendas and political correctness.

On Wednesday evening a story about two students at Stonewall Collegiate being directed to wear a rainbow poppy by a choir director went viral. One protested by posting signs throughout the school filled with online comments disparaging the movement of the rainbow poppy.

The 17-year-old has since been suspended until after Remembrance Day for her campaign, being told she was spreading “hate speech.”

According to a former Conservative Party candidate from northern Manitoba in Canada, her 17-year-old cousin was suspended from school when she refused to wear a Remembrance Day poppy containing a rainbow in support of LGBT+ causes.

‘Never seen something so disrespectful’: Student suspended amid row over LGBTQ ‘rainbow poppy’

A high school student has been suspended after she put up a poster explaining her refusal to wear a “disrespectful” rainbow poppy.

“Social media expert Susie Parker says people need to be more critical about what they read and share online.“

except I posted three references to the same rainbow poppy story in the school. Nothing fake in any of them. Even if Canadian msm says so.

my stories don’t say the rainbow poppy phenomenon is widespread.

YOUR story says this:

s, and that students were suspended because of a poster they hung up around the school protesting rainbow poppies, which bordered on hate speech.

but does not bother to show the posters that are easily found online and I’ve read them. there is nothing “hateful” in them.

and cowards like the CBC won’t even run a story we have to get the news from foreign news outlets.

I would encourage anyone who is interested in this story to read Cyara Bird’s statement and apology, as posted on Twitter this evening. Cheers.

I see. several news reports do have the story headline wrong.

but the student was suspended for expressing the opinion that they think the lgbt community should beck off the poppy program. that’s not hate speech.

I see. several news reports do have the story headline wrong.


To be fair, Bird’s initial comments were the basis of the story, and now she states that she spoke in error. Meanwhile, it remains to be seen whether there are any rainbow poppies in existence in Canada.

Here what Pink News has to say about the so-called rainbow poppies.

i don’t care about “so called” rainbow poppies and their existence or not elsewhere on the planet.

in this school a student was suspended for airing her opposition to what was indeed a rainbow poppy program or project at her school.

she was sent home for saying that she felt lgbt causes should not interfere with the traditional poppy program.

Natalie, the 17-year-old girl who was suspended from Stonewall Collegiate yesterday over a rainbow poppy row, has provided an exclusive statement to The Post Millennial with additional details on the controversial situation.

“It all started when teachers, counsellors, and some students said we should wear the rainbow poppy…” She wrote, stating that she disagreed with the decision to change the traditional red-and-black poppy used to honour Canadian veterans during the Remembrance Day holiday. “I typed up papers on a computer, printed them off, and taped them up in the halls.”

The printed papers contained some quotes from news stories and people on social media Natalie had collected of individuals expressing criticism of the rainbow poppy. Natalie says she was just trying to express her beliefs and opinion on the matter.

“As I was putting them up, teachers were taking them down. I watched as they took them to the office and gave them to the secretary.”

Natalie says she went to class, but was called to the office soon after. There, the Principal and Vice Principal—Jason Calissis and Bryce Baldwin—were waiting, and Natalie alleges they began to yell at her and accuse her of posting “hate speech.”

“They accused me of hate speech and endangering the physical safety of the group of individuals [LGBT students].” Natalie says, “They asked me what I was thinking, and I told them everything … I said I was just voicing my beliefs and morals.”

Natalie says the two male administrators continued to accuse her of “hate speech,” and she became so scared at one point that she was on the verge of tears. “I got to the point of almost crying but I didn’t. I had to be the voice for all those families who were greatly disrespected and offended.”

Natalie is the cousin of former federal MP candidate Cyara Bird, who ran on the Conservative Party ticket in the 2019 general election for the Churchill-Keewatinook Aski riding. Bird, a member of the Little Black River First Nation, tells The Post Millennial that there are World War Two veterans in their family.

Upon trying to record the conversation with the Principal and Vice Principal on her cell phone, Natalie says her phone was confiscated and she was suspended until after Remembrance Day.

“So I asked why? Why am I being suspended and punished for expressing my feelings? And they said everybody is entitled to their own beliefs, opinions, and way of life. So I asked, why am I not?”

did she write the notes in the most tactful manner?  no.  but she's a 11th-grade high school student at a rural school in the province (Manitoba 62%) with the lowest graduation rate in the country.  did she commit acts of hate speech?  no.  should she be suspended?  no.

and you can take issue with me posting a post millennial news story but as i say cbc refuses to cover the story so this is what i have.

nothing about this is "fake news" as city tv says.

rebel media sent a reporter and this is a 10-minute video of him talking to the girl her dad other students plus the principal and superintendent (they both "no commented") etc.

the school is 25 km north of winnipeg.  cbc (with over 125 staffers in winnipeg) please send a reporter!   global sent a news team and interviewed students - no story.

It’s definitely strange for the CBC not to have covered this. What exactly are they waiting for? Are their go-tos for this sort of article unwilling to step on veterans’ toes by making a statement in defence of the school? Is that what’s missing, so the CBC won’t touch it?

However, there is no proof that rainbow poppies are being sold in Canada and the school’s board denies the suspensions have occurred.

but that's not right unless the girl and her dad are lying on that rebel video.

it's also unclear how the huffington post has determined that denial since the board and staff have been unwilling to talk to media.  they released this statement:

In light of misinformation which has been widely spread on social media, we will share that at no point did any staff member of Stonewall Collegiate or Interlake School Division direct, nor mandate, any student to wear a ‘rainbow poppy’.

The Board of Trustees will not comment on matters regarding individual students so as to maintain confidentiality for those involved.

Media inquiries may be directed to