Starting to sound like a lot of “Reefer Madness” …. and we all know how that worked out.
Now take the quotes posted on this topic and substitute the word heroine for alcohol … is there any difference? Just asking.
What you see on the streets is only the tip of the iceberg, rather the drug is a opioid or alcohol. May explain why the majority of opioid overdose’s occurred in homes. It doesn’t make sense to me that the billions made on illicit drugs are just from a small portion of society (homeless). Leaving many many working people and family people that are alcoholics or opioid addicts that you would never know or expect. And, will be till they die.
Fentanyl is probably one the most used opioid use in hospitals, like the fentanyl lollypops used in children’s cancer hospitals. If you’ve ever had surgery you’ve probably had fentanyl. Not only because it’s effective but also how safe it is on the body. The effects on the body of a long term daily user of prescribed medical fentanyl would be lower than that of person using alcohol daily in the long term. But obviously fentanyl is extremely strong and easily lead to OD.
As far as heroin goes, they say it’s pretty much nonexistent now anyways. Additionally the most abuse drugs are prescription, but the users is not a addict …. It was prescribed.
This whole situation on drugs is so easy to solve…… bring back the ”Just Say No” … as we know that worked so well.

Why is heroin almost non-existent?

Did you have classmates dying of overdoses, ismo? Were your teachers advising you not to use drugs alone? Were schools sending parents reminders to ensure their prescription drugs were safely stored?

We had the DARE program in the 90s. Today kids go to funerals.

Again show me..  Kids have always done what you are talking about.  high schools have always had deaths and funerals..  I wouldn't argue this but to think kids today believe hard drugs and weed are the same is way off..  You are hearing anecdotal stories through social media or one specific story...  Weed use is still the highest..  Prescription drugs, I would not classify as hard drugs...

I never had a classmate die through my entire school life... Either have my kids (so far) but I wouldn't take one example and consider that and classify generations based on that....

Why is heroin almost non-existent?

Started disappearing years ago as fentanyl and similar drugs started replacing it. So even if you get something that looks like heroin it’s most likely fentanyl without heroine or traces of heroine with fentanyl.

No one who isn't ill or recovering from surgery should be using any type of medical grade narcotic. Period.

Started disappearing years ago as fentanyl and similar drugs started replacing it. So even if you get something that looks like heroin it’s most likely fentanyl without heroine or traces of heroine with fentanyl.

Sounds like we should have decriminalized heroin long before its market evaporated.

In any case, the synthetics are so readily available, and so cheap, that it’s no wonder they’re so prevalent.

After my surgery they gave me fentanyl. No thanks. The discomfort from the surgery was preferable to having my head feel like that.

I absolutely loved my Ativan, propofol and fentanyl cocktail, 30 minute nap felt like 8 hours of sleep. This is why I decline pain meds aside from a local for dental work, etc.

Turns out Tom Cruise was right.


Depression 'is NOT caused by low serotonin levels': Study casts doubt over widespread use of potent drugs designed to treat chemical imbalance in brain

In BC, 6 people per day die from illicit drug overdoes.

Now, six years since that emergency was declared, an average of six people are dying daily and a total of 9,400 lives have been lost to illicit drug toxicity in the province.

In Scotland, it's about 3.4 per day, and they have a very similar population (it's about 9% higher).

Some 1,264 people died in 2019 from drug misuse in Scotland - a rate three times higher than the UK as a whole.

But Scotland has 3x the illicit drug death rate of the UK overall.

“..38 people have died since the apparent mass poisoning on Monday.

"They had consumed methyl alcohol, which was almost undiluted, believing it to be liquor," police official Ashok Kumar Yadav said…

….Sale and consumption of alcohol is banned in Gujarat, the home state of India's Prime Minister Narendra Modi..”:

Chief Coroner Lisa Lapointe is reiterating that B.C. is on track for a record year for toxic drug deaths.

So let's just keep doing more of what has been working so well for the past 6 years.

According to the BC Coroners Service, 146 people died of suspected illicit drug toxicity in June 2022 – a 17 per cent decrease year-over-year, and 26 per cent fewer people than in May 2022.

While that number is lower than B.C. has seen at times in the years-long opioid crisis, it's still high, equating to an average of nearly five people dying from the province's toxic street drug supply every day of that month.

'They're going to end up dead like my brother is': Victoria man's death blamed on toxic drug additive 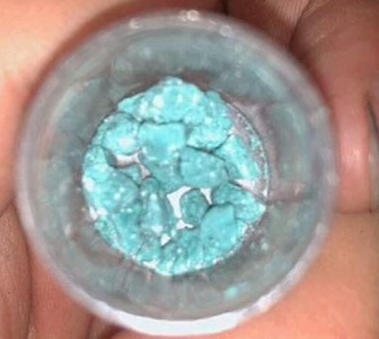 A picture of the blue-tinted form of crack cocaine that began appearing on Victoria streets in August 2022.

British Columbia's toxic drug crisis has claimed another life on the streets of Victoria, just hours after health officials issued a warning about a spike in drug poisoning in the Vancouver Island region. 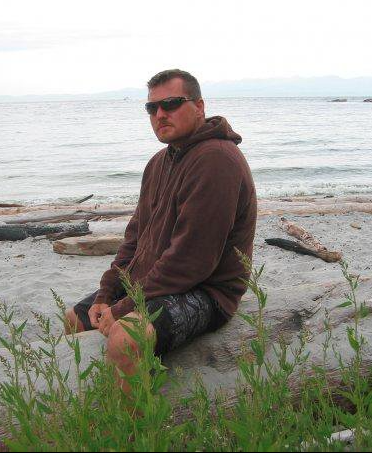 Facebook
Chris Schwede, 49, was found dead Thursday morning in his tent on Pandora Avenue, in the heart of Victoria's overlapping crises of addiction, homelessness and mental illness.

Inside Schwede's tent was a blue-tinted form of crack cocaine that first appeared in the city on Wednesday, according to Grant McKenzie, who knew Schwede through his work at Our Place Society, the main social services provider in the area.

"They’ve added a new animal tranquilizer to this turquoise rock," McKenzie said. "And as we see behind me, it is fatal to humans. So they’ve added this in along with fentanyl, carfentanyl, benzos – a real cocktail that’s just leading to straight poison."

The tranquilizer is believed to be xylazine, which has appeared in street drugs in the B.C. Interior and the eastern United States in recent weeks.
'MY BROTHER JUST DIED'

Schwede's sister Candice Csaky says her brother died of an overdose because there was no publicly funded care available to him.

"He came to me multiple times in the last year and said he was done with this life. He was going to get a job," Csaky told CTV News. "He was offered a job and he was supposed to start on Monday but he relapsed on the weekend because he didn't have support systems in place." 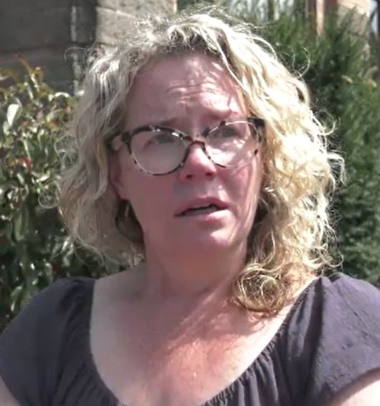 Candice Csaky near the tent where her brother was found dead on Aug. 18, 2022, on Victoria's Pandora Avenue.
"I don't know who these people are in power, but they're not down here checking on their brother every day, making sure they're still alive," she said.

"When somebody comes to you who is an addict – a family member, a loved one – and they say, 'I'm done with this life. I never want to go down here again. I want to get my life back,' there needs to be a rehab facility you can walk them into that day that is publicly funded," she said.

"Do you think that drug addict is going to be saying the same thing four months from now? They're not. They need help today. Right now. Not in four months. Not on a waitlist," she added. "Because that opportunity is likely not to come again and they’re going to end up dead like my brother is."
More: https://vancouverisl...itive-1.6033094

...Chris Schwede, 49, was found dead Thursday morning in his tent on Pandora Avenue...

Isn't there a "safe" injection site right there?

Far too many people struggling with severe mental illness and addiction continue to cycle through San Francisco’s overburdened emergency rooms, failing to get long-term help, according to city officials.

Frustrated city health care workers and public hospital leaders shed light on the crisis — which comes despite a slew of new programs and massive behavior health funding — during a public hearing Thursday.

So far in 2022, 14 out of 1,071 patients at the Psychiatric Emergency Services department of San Francisco General Hospital, the city’s only such unit, were admitted between 11 and 20 times. One came more than 20 times.

Five individuals alone over the past five years had at least 1,781 ambulance transports, possibly up to 2,000, which costs $4 million, said April Sloan, who oversees teams of paramedics for the fire department who respond to people in crisis. The five struggled with alcohol use disorder, possibly self-medicating due to an undiagnosed mental illness, she said.

Two are now dead. Two are in a shelter program where they receive alcohol as medication. The city attempted to put one of them in conservatorship in order to mandate treatment but had to drop it when officials couldn’t find a placement, Sloan said. The fifth is in a locked psychiatric facility.

Five individuals alone over the past five years had at least 1,781 ambulance transports, possibly up to 2,000, which costs $4 million

Two are now dead. Two are in a shelter program where they receive alcohol as medication. The city attempted to put one of them in conservatorship in order to mandate treatment but had to drop it when officials couldn’t find a placement, Sloan said. The fifth is in a locked psychiatric facility.

"Locked up" infers prison instead of getting treatment and possibly living.  Perhaps the street is the prison and the facility is freedom.

"Locked up" infers prison instead of getting treatment and possibly living.  Perhaps the street is the prison and the facility is freedom.

I would argue that there are homeless people who fall outside the confines of the three groups laid out in this commentary, but with regards to those coping with mental illness, the increase in drug addiction is spot on.

I began working as a mental-health worker in the early 1990s in Vancouver, and the closing of Riverview was indeed the beginning of the wave of people with mental illnesses attempting to find refuge in the streets and subsequently seeking solace in substance use.

We have never recovered from that failure to provide appropriate mental health housing and support. Now, more than ever, we are inadvertently and exponentially creating new addicts by lumping everyone together in the same “community” where there are few residential or social spaces outside of detox or rehab where drug use is not front and centre.