Journalism, Online Media and Freedom of the Press.

This is very interesting to watch. They obviously have big problem with Bernie, they are almost giving him the Trump treatment

It seemed to have started with the CNN debate, and now even Clinton has come out to bad mouth him.

With Rogan backing him it’s an all out circus.

An important thing to always remember is that Bernie Sanders has not been a member of the Democrats, he has only joined them to run for president.  There are many in the Democrats that consider him disloyal especially since he quit the party after losing the nomination in 2016 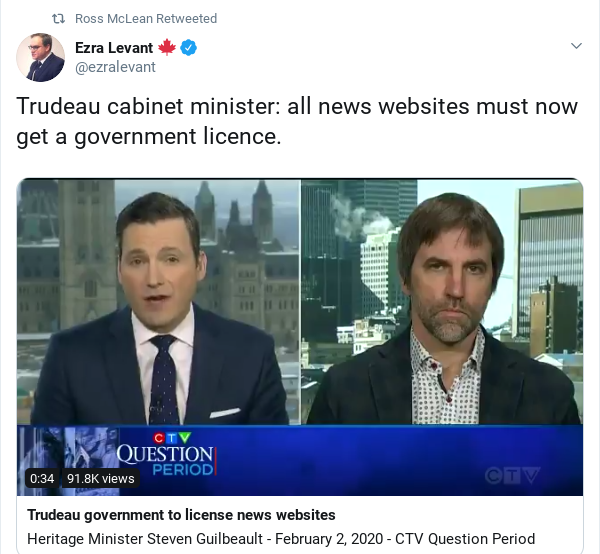 What does that even mean?

steven g. is a diabolical menace.

So the government will shutdown unlicensed websites?

So the government will shutdown unlicensed websites?


Yes. It will be part of the Sharia law that’s about to be implemented.

One of the world’s natural wonders is being lost to development. The most recent trouble in paradise comes in the form of a housing crisis which, tragically, is perceived by many as an isolated incident with a simple solution — create more densities.

World’s natural wonders? What are they wondering?

it's an opinion piece.  by a "raise the drawbridge" resident.

Meanwhile, housing groups have formed and are putting intense pressure on trustees. A key organizer has written about the need for “many thousands” of new affordable housing units, an incredible number for a protected island that has a population of only 12,000 and where water is so scarce the local water utility has placed a moratorium on new hook-ups.

Housing advocates oppose gentrification, but seem less concerned about the environmental impact of changing the demographics of the island.

The debate raises the question of whether the Gulf Islands can be a regional go-to spot for people seeking affordable housing, while still meeting the goals of the Islands Trust.

The Gulf Islands are in crisis, and it must be remembered that their protection is not just for the benefit of those who live there, but also British Columbia generally.

The province must intervene to help with issues such as enforcement, water shortages and clearcut logging on private land. Above all, those in charge must work co-operatively to create a long-term plan to limit growth.

Failure to do so will see the islands lose their natural splendour and fade into something bland, ordinary and uninspiring.

Rebuttal by a local realtor.

why are all the TC threads locked?

anyway. they are moving to Vic west.


If plans hold, we will move back to 2621 Douglas in a couple of years, after the building is transformed by Merchant Capital, which bought it from the Times Colonist a couple of years ago.

I wonder if that means they might have different plans for the future.

the article says the circulation department has moved to esquimalt.

A Polish-Canadian newspaper twice published an anti-Semitic tirade recently that suggested COVID-19 is a creation of “organized Jewry,” and that Jews were the cause of all the world’s ills.

The article has come to light amid warnings worldwide about a unique wave of pandemic-spawned anti-Semitism.

The commentary appeared first as the leading front-page article in the March 25 edition of Glos, a weekly newspaper based in Toronto that claims to be read by Poles “around the globe.” It appears to be a renamed version of a former paper called Glos Polski.

"The health authority says it’s working to determine who may have been exposed to COVID-19 and is screening residents and staff twice a day for the virus. The infected staff member is isolating at hoome, and all residents have been isolated to their suites.": https://www.timescol...oria-1.24265142

The Biden Admin is preventing media access to border facilities.

“There’s no modern precedent for a full physical ban on media access to CBP border operations. To those who might say, cut them some slack - they are dealing with a situation, I’d say that showing the US response to the current immigrant surge is exactly the media’s role.”

This is one of the biggest media stories of the decade. Where’s the usual bevy of critics and concerned posters?

This is one of the biggest media stories of the decade.

Everybody agrees that the press should have access - including the Biden administration and DHS.  The DHS suspended press access citing pandemic concerns.  If the migrants are "in custody", the US has a legal duty to protect these people from coronavirus exposure. These facilities are already jam-packed and adding press to the mix makes the situation worse. These types of facilities are high risk for widespread contamination already.  It's the same reason I can't go visit all my buddies at Wilkinson anymore.

Despite this, the Biden administration has been relatively open about these problems, providing numbers, and updates even though they are not favourable to the administration. The DHS has stated they are working on a plan to allow safe access to the facilities for press that protects them and the migrants.  As far as controversies go, it's relatively minor, in my view.  Obviously the border and immigration issues in general are a serious issue, but it's been like that for as long as I've been alive.

On the other hand, after years of having a president treat the press poorly and being staunchly defended by people like Mike K for doing so, it's a bit rich to see that you've become such an advocate for the press.